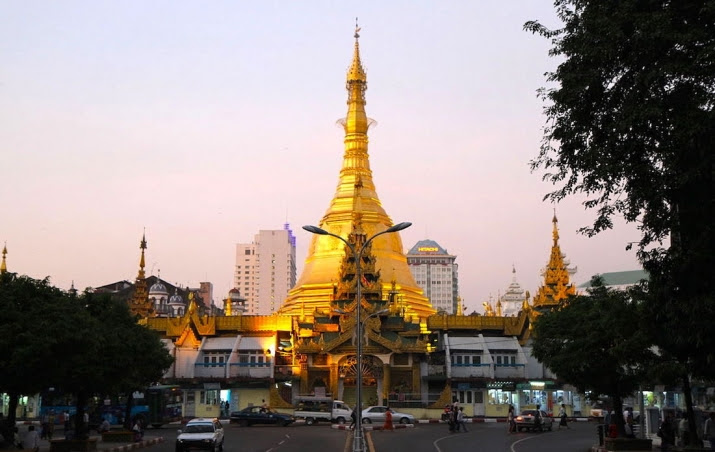 Although its actual origins have become shrouded in the mists of time, the original structure of the Sule Pagoda is believed to be some 2,500 years old and is said to enshrine a strand of hair from the historical Buddha, Shakyamuni. The pagoda, or stupa, has been renovated and enlarged several times during its history by various monarchs, reaching its present height during the 15th century at the behest of Queen Shin Sawbu. One of the most famous Buddhist monuments in Myanmar, it has been said that the Sule Pagoda even predates the city’s grander, more famous landmark, the majestic Shwedagon Pagoda, although some sources dispute this estimate.

The renovation, which began in December last year, is costly for a country in which much of the population struggles with poverty, with each of the golden plates costing some US$1,100 each. However, such acts are viewed in this Buddhist-majority nation as pious demonstrations of charity that generate merit (Skt: punya) for all concerned; good deeds that contribute towards a person’s spiritual growth.

“This is our spiritual belief that people worship at the pagoda, wishing for the best for their future, their family,” said Aye, a member of the Sule Pagoda’s board of trustees, who, like many Burmese, goes by only one name. (The Straits Times)

The Mon-style pagoda, or stupa, has an octagonal base, each side of which measures 24 feet, and incorporates its original structure, which was Indian in origin and replicated the form and function of a relic mound. As Burmese culture and architectural styles evolved away from its South Indian influences, this was reflected in the numerous renovations that have taken place over the centuries resulting in the current gracefully tapering spire.

An important social and political focal point for Myanmar’s capital, the monument was made the center of Yangon in the middle of the 19th century by Lt. Alexander Fraser of the Bengal Engineers, who also designed the city’s street layout that remains to this day. Over the years, the Sule Pagoda has served as rallying point for numerous activists and demonstrations, including the 1988 uprisings and the Saffron Revolution of 2007, when anti-government and pro-democracy demonstrators flocked to Sule Pagoda and thousands of monks gathered to pray.

Myanmar is a predominantly Buddhist country. According to data for 2010 from the Washington, DC-based Pew Research Center, just over 80 per cent of the population identify as Buddhists, most of whom follow the Theravada tradition.  Myanmar has the highest proportion of monks of any Buddhist country, numbering more than 400,000, according to US government data.Pagodas and stupas has greater importance in Buddhist society.especially in south east asian countries.