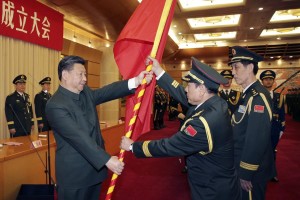 Xi’s push to reform the military coincides with China becoming more assertive in its territorial disputes in the East and South China Seas, and as its navy invests in submarines and aircraft carriers and its air force develops stealth fighters.

The reforms include establishing a joint operational command structure by 2020 and rejigging existing military regions, as well as cutting troop numbers by 300,000, a surprise announcement he made in September.

last year, Xi, the ruling Communist Party chief and also chairman of the Central Military Commission which runs the military, inaugurated a general command unit for the People’s Liberation Army (PLA), a missile force and a strategic support force.

china’s move, which had been flagged in advance by state media, reclassified seven military regions into five — the East, West, South, North and Middle battle zones.

They will constitute what the Defense Ministry said in an online statement was each zone’s “highest-level joint combat command structure”.

Xi said the new zones shoulder the responsibility of responding to their respective “security threats, upholding peace and constraining conflict”.

Defense Ministry spokesman Yang Yujun said in a separate statement posted online that China would maintain its “defensive national defence policy” and that the country’s development and foreign policy would be unchanged.

China has been moving rapidly to upgrade its military hardware, but integration of complex systems across a regionalised command structure has been a major challenge.