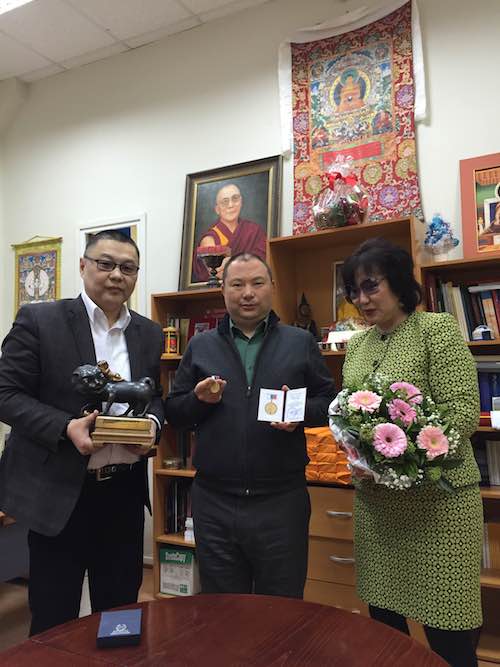 His Holiness the Dalai Lama currently in the US has been honored (in absentia) with an award for ‘outstanding contribution to the development of Tibetan medicine’ by the LLC Green Lotus, a Moscow-based medical center.

The award was received by Telo Tulku Rinpoche, the Representative of His Holiness the Dalai Lama at the Tibet Culture & Information Centre (Office of Tibet), Moscow, and was presented by Dugarov Bilikto, Director General of the Medical Centre.His Holiness was awarded a gold medal adorned with an image of Medicine Buddha (Men-Lha) in the middle and a statue of young child symbolizing the Dalai Lama, riding a snow lion that shows the bond between the exiled Tibetan leader and the land of the snow. The world-renowned Buryat sculptor, Dashi Namdakov, made the statue titled, ‘The Little Buddha’.

“As we celebrate the Dalai Lama’s 80th year, we are grateful towards his contribution and hard work for the preservation of Tibetan Medicine not only in India but beyond as well. Our people share the rich culture in the sphere of Buddhist philosophy, astrology, art and Medicine,” said Dugarov Bilikto.

“We congratulate the Dalai Lama on his accomplishments during his life time and want to wish His Holiness Long, strong and healthy years ahead.”

“Men-Tse-Khang has sent Tibetan doctors to Russia for many years to offer not only consultations for patients but for offering lecture, workshops and seminars as well in the Russian Federation” said Telo Tulku Rinpoche.

“The people of Tibet and Russia share many centuries’ link through Buddhism in the field of religion, science and philosophy and we are glad to be part of Russia’s revival, restoration and reintroduction to the Rich cultural heritage which was destroyed during the Communist regime,” he said.

He also mentioned that Russia have ‘moral responsibility’ to help the Tibetans since Tibet is going through difficult situation at the moment is the same suffering the Russian people went through in mid-20th century.