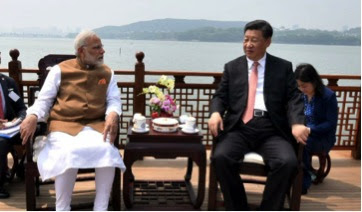 Wuhan, the capital city of Hubei province in China, was in the limelight when an informal summit was held between President Xi Jinping and Prime Minster Narendra Modi. The Wuhan Summit is significant, fruitful and unprecedented as a milestone in the history of bilateral relations

The informal summit between Prime Minister Shri Narendra Modi and President Xi Jinping in Wuhan on the 27th and 28th April, 2018. Many commentators and thought leaders around the world have given their thoughts on the ups and downs of the summit.

Exactly, 30 years ago, the official visit of Prime Minister Shri Rajiv Gandhi to China was heralded as a major event, breaking 34 years of stalemate between the two Asian giants. This visit also resulted in a Joint Communiqué, which stressed the need to restore friendly relations on the basis of the Five Principles of Peaceful Coexistence. The Communiqué also expressed China’s concern about the agitations by Tibetans in India and reiterated the People’s Republic of China’s position that Tibet was an integral part of China. However, unlike the earlier visit, this summit didn’t yield a Joint Communiqué.

Before the Wuhan Summit, the Chinese Ambassador to India Luo Zhaohui shared his thoughts on India-China relations in the Indian daily newspaper, Hindustan Times. In the article, the Ambassador said “…It is natural for neighbours to have differences. When differences can’t be solved for now, we should properly manage them and focus on cooperation…” However, one must recall that the source of the differences is not natural. In fact, it is a handiwork of Chinese Communist Party (CCP) after the invasion of Tibet.

In 2017, the Doklam standoff defined India-China relations. This standoff became one of the factors that triggered the Informal Wuhan Summit. However, it is from the Chumbi Valley, located in the Dromo region of Tibet that the People’s Liberation Army arrived and started upgrading the motorable road, which later became the immediate cause of the Doklam standoff.

Tibet: One of China’s core interests and six sensitivities

Among its core interests, China time and again affirms that Tibet is an integral part of China. The Hotel Marriott incident of January, 2018 further validated China’s hyper-sensitivities towards anything related to Tibet. Even during a conversation with the Times of India, on January 31, 2017, Michael Pillsbury, the then Senior Advisor to the US president described the top six “sensitivities” tabled by senior Chinese officials for the new Donald Trump administration. Among the six sensitivities are the Dalai Lama and the Tibetan government in exile. According to the Chinese ambassador to India Luo Zhaohui, Modi and Xi spent nine hours together in seven events and had four one-on-one meetings.

Hence, this writer assumes that Tibet could be one of the topics during their informal discussions.

Tibet: A Source of Rivers and Genuine resolution

One of the major highlights of the informal Wuhan summit was Prime Minister Shri Narendra Modi’s and President Xi Jinping’s boat ride on the East Lake of Wuhan. However, the East Lake originally owes its origins from Drichu (Yangtze) River flowing from the Tibetan Plateau. Like Drichu River, most of the rivers in India and China, including Brahmaputra and Drichu originates from the Tibetan Plateau. For centuries, Tibet has been a source of major rivers in India and China, supplying fresh water to all downstream Asian countries.

In the coming days, like the major rivers of Asia, the source of solution for India and China differences, may flow from the Tibetan Plateau as well.

Wuhan Summit is not a talk shop and we have a lot of work to do in the future such as trade deficit mitigation, acceleration of BCIM process, cooperation in Afghanistan and establishment of high-level people-to-people exchange mechanism. Building on these efforts, we can accumulate more consensus for the following summits such as SCO Summit in Qingdao, BRICS Summit in South Africa and G20 Summit in Argentina this year where two leaders are likely expected to meet again.