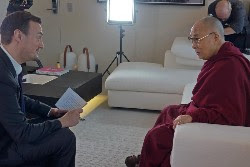 DHARAMSHALA, Sept 9: In an exclusive interview with Belgian media agency RTBF, the Tibetan leader His Holiness the Dalai Lama reiterated his long maintained stand regarding his reincarnation, saying he will be born where he can contribute the most to humanity and to create a more peaceful and compassionate world, in his next life.

The current Dalai Lama, 14th in the lineage, has earlier mentioned that the purpose of reincarnating is to fulfill any incomplete task of the previous life. The Nobel laureate views his three major commitments being promotion of basic human values, promotion of harmony between religious traditions of the world and preservation Tibet’s Buddhist culture.

RTGB’s Editor in Chief, François Mazure asked the Tibetan leader if the next Dalai Lama could be a woman to which he replied that Women leaders can contribute significantly to a better world. He said that if women leaders would lead the over 200 countries in the world, the possibility of a more peaceful and less terror related incidents could become a reality.

The 81 year old also said that for a more compassionate world, the ground work has to be laid in education of children in basic human values of tolerance, compassion and forgiveness among others.

The Dalai Lama yesterday inaugurated the 7th Tibet Support Group meet in the Belgian capital of Brussels where 250 delegates from over 50 countries have congregated for the 3 day meet. Currently on an 18 day European schedule, the Dalai Lama will have events (September 15-19) in the largest city of the Grand Est region of France, Strasbourg where he is scheduled to visit the European Parliament. He will also address students at an event organized by the Mayor of Strasbourg and attend the Body & Mind Conference there.

For the last two days in Strasbourg, His Holiness will give a one-day teaching on Nagarjuna’s Commentary on Bodhicitta (jangchup semdrel) and confer an Avalokiteshvera empowerment (chenresig wang)organized by the Federation of Tibetan Buddhism. The Tibetan leader will leave for Poland on Sept. 19.