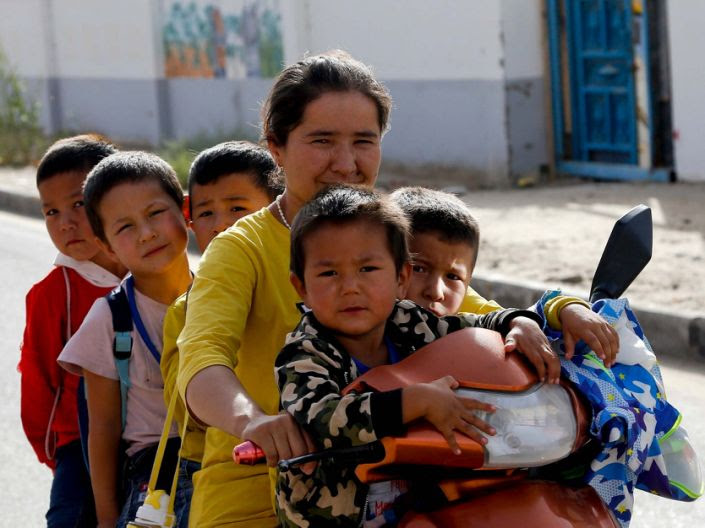 A Uighur woman with her children at the Unity New Village in western China’s Xinjiang region: APChina is facing mounting global criticism over its treatment of the Uighur population in Xinjiang province – with claims of forced labour camps and mass sterilisation.

So who are the Uighurs? And what sort of evidence lies behind these claims? The Independent took a closer look at a group largely forgotten by the world until recent weeks.

Who are the Uighur people?

The Uighur are an ethnic minority group of Muslims living in China’s north-west region of Xinjiang. There are an estimated 11 million Uighurs in the region – almost half of its total population.

Uighur Muslims have been there for hundreds of years and speak a language related to Turkish. It is believed their ancestors may have come from a previous homeland of the Turks in the northern part of central Asia.

Some Uighurs don’t accept that Xinjiang – officially an “autonomous region” – is part of China, citing evidence that their ancestors lived in the area before Chinese Han and Tang dynasties established their dominion in the area.

What sort of abuse is thought to be taking place?

There is credible evidence that up to one million Uighurs and other Muslim minorities are being held in “re-education” detention centres in Xinjiang, according to a report by the United Nations Committee on the Elimination of Racial Discrimination.

Beijing has denied any mistreatment – claiming that these camps are “vocational training centres” which help stamp out extremism by Islamist separatists, as well as giving people new skills.

A man driving a vehicle in an Uighur neighbourhood in Aksu, Xinjiang province (AFP via Getty Images)However, a 2018 report by Amnesty International report found that arbitrary detention of Uighur Muslims across the province was widespread. The exile group World Uyghur Congress claims detainees are held without charge, and forced to undergo attempted indoctrination by shouting Chinese Communist Party slogans.

When recently confronted with disturbing video footage showing blindfolded men kneeling and waiting to be led onto trains in Xinjiang, China’s ambassador to the UK told the BBC the video could be “fake”. The video was authenticated by the Australian security services.

What’s behind the claims of ‘mass sterilisation’?

There is evidence Chinese government is taking draconian measures to slash birth rates among Uighurs as part of a sweeping campaign to curb its Muslim population.

A report released in June by China scholar Adrian Zenz claimed the Chinese authorities were forcing Uighur women to be sterilised or fitted with contraceptive devices across Xinjiang.

A recent Associated Press investigation discovered women in the province have faced fines and threats of detention for breaching limits on having babies. It also found the authorities force intrauterine devices (IUDs), sterilisation and even abortion on Uighur women.

Protesters attend a rally in Hong Kong to show support for the Uighur minority in China (AFP/Getty)What political action has been taken?

The US has imposed sanctions on Chinese officials, companies and institutions linked to China’s treatment of Uighurs in the Xinjiang region. On 20 July, the US Commerce Department added 11 Chinese companies to the US economic blacklist.

France also condemned the treatment of the ethnic group. French finance minister Bruno Le Maire said it was “revolting and unacceptable” – and called for “international independent observers” to be allowed to inspect conditions in Xinjiang.

More than 180 human rights groups have urged brands from Adidas to Amazon to end sourcing of cotton and clothing from the Xinjiang region and cut ties with any suppliers in China that benefit from what they claim to be “forced labour”.

While most fashion brands do not source from factories in Xinjiang, many of their supply chains are likely to be tainted by cotton picked by Uighurs that is exported across China and used by other suppliers, a coalition of organisations said in a letter.

More than 80 per cent of China’s cotton comes from Xinjiang. “Brands and retailers recognise there is a massive problem in the region, and that their supply chains are exposed to a grave risk of forced labour,” said Scott Nova, head of the US-based Worker Rights Consortium (WRC).