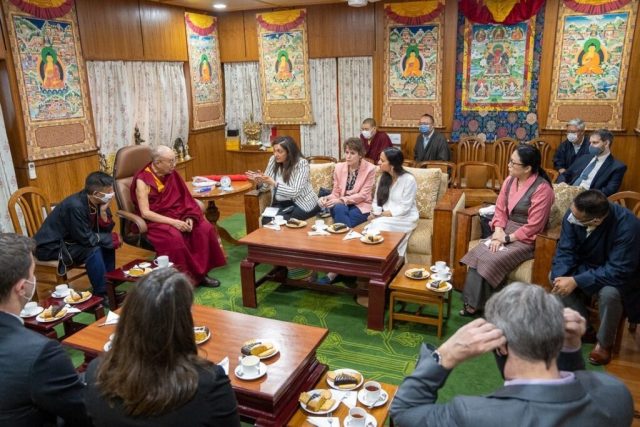 The US Special Coordinator for Tibetan Issues Uzra Zeya met with Tibetan leader His Holiness the Dalai Lama at his residence in Dharamshala on Thursday. “It is quite clear that changing Tibetan minds [has] completely failed by the Chinese Communist [Party]. Meanwhile, China themselves thinking [is] rapidly changing; now socialism, Marxism [has] gone,” the exiled leader told the dignitaries. The US official’s two-day visit to Dharamshala comes weeks after the Washington visit of CTA President Penpa Tsering last month.

“Your Holiness, it is my great honour to have this audience with you. I am Uzra Zeya; I am President Biden’s Special Coordinator for Tibetan Issues and it is my greatest honour to be received by you. I bring greetings from our President and the American people. Best wishes to your good health and our gratitude for your message of peace for the world,” Zeya said, emphasizing the US’ support for the Tibetan cause.

The octogenarian leader also said that both the United States of America and India are great nations where “democracy ensures complete freedom” for the people. The Dalai Lama noted that India is a noted example of flourishing democracy since all religious traditions live together in India. “That’s unity,” he remarked.

ICT Interim Vice-President Tencho Gyatso, who also accompanied the delegation, in a report prior to the visit said, “We believe this trip can and must translate President Biden’s statements of support into proactive initiatives needed to build on global support for Tibet, including lifting the veil that the CCP’s 70-year occupation is an ‘internal matter’. Negotiations between Chinese and Tibetan representatives must be started.” The State Department announced Monday that she will “travel May 17- 22 to India and Nepal to deepen cooperation on human rights and democratic governance goals, and to advance humanitarian priorities.”

US diplomat Zeya presented the religious leader with a Native American dream catcher, as a mark of solidarity among oppressed groups across borders. As an Under Secretary of State, she is a higher-ranking official than the former Special Coordinator Robert Destro who served in the Trump administration.

On Wednesday, Zeya visited the offices of the CTA including the Kashag secretariat, Supreme Justice Commission, Tibet Museum and Library of Tibetan Works and Archives, after she was welcomed by hundreds of Tibetans.

The CTA official spokesperson Tenzin Lekshay told the press that Under Secretary Zeya’s official visit to Dharamshala is of utmost significance to the cause, “Biden administration’s swift appointment of the position of Special coordinator for Tibet was in itself a notable move. Her visit ensures her will to support the cause, as it is evident by her planned interaction with His Holiness the Dalai Lama and meeting with the CTA official staff. This is indeed the first step through which the coordinator would pave the way for the US government to help the Tibetan cause.”

The US President Joe Biden had earlier promised to appoint a Special Coordinator for Tibet and meet with the revered Dalai Lama. “I’ll work with our allies in pressing Beijing to return to direct dialogue with the representatives of the Tibetan people to achieve meaningful autonomy, respect for human rights, and the preservation of Tibet’s environment as well as its unique cultural, linguistic and religious traditions,” US President Biden had said in September 2020 during his election campaign.