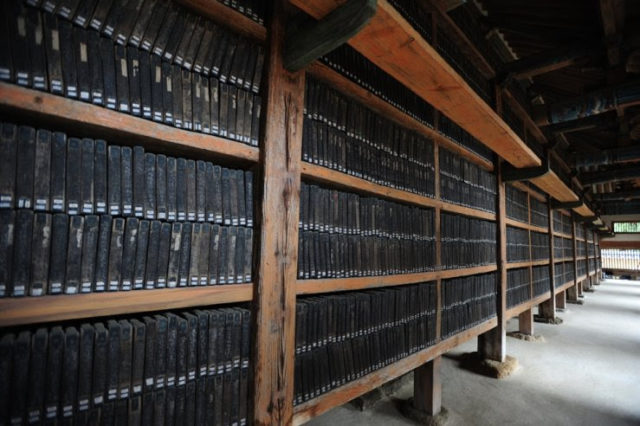 Tripiṭaka  meaning “Triple Basket” is the traditional term for ancient collections of Buddhist scriptures.
Tripiṭaka , also called Tipiṭaka (Pali), means Three Volumes. It is a compound Sanskrit word of tri (त्रि) meaning three, and piṭaka (पिटक) or piṭa (पिट), meaning “book”.The ‘three baskets’ were originally the receptacles of the palm-leaf manuscripts on which were preserved the Sutta Piṭaka, the Vinaya Piṭaka and the Abhidhamma Piṭaka, the three divisions that constitute the Pali Canon.
The Tripiṭaka is composed of three main categories of texts that collectively constitute the Buddhist canon: the Sutra Piṭaka, the Vinaya Piṭaka, and the Abhidhamma Piṭaka.The Sūtra Piṭaka is older than the Vinaya Piṭaka, and the Abhidharma Piṭaka represents a later tradition of scholastic analysis and systematization of the contents of the Sutta Piṭaka originating at least two centuries after the other two parts of the canon.

The Vinaya focuses on the rules and regulations, or the morals and ethics,of monastic life that range from dress code and dietary rules to prohibitions of certain personal conducts.

Sutras were the doctrinal teachings in aphoristic or narrative format. The Buddha delivered all of his sermons in Magadhan. These sermons were rehearsed orally during the meeting of the First Buddhist council just after the Parinibbana of the Buddha. The teachings continued to be transmitted orally and written down in the first century BCE.The Abhidharma collections focus on philosophical and psychological analysis and interpretation of Buddhist doctrine.

The Tripitaka Koreana, known as the world’s most comprehensive and oldest surviving version of Buddhist canon housed in the UNESCO-designated Haein Temple in South Gyeongsang Province, will soon be available for public viewing every weekend starting June 19.

This is the first time in its 770-year history, since its creation, that the ancient relic will be accessible to the public after appearing in a series of limited showcases at special Buddhist ceremonies and festivals.

A “tour” of the work, designed to introduce and spread the values of Buddhist cultural assets, will take place at 10 a.m. and 2 p.m. every Saturday and Sunday.

“As it was created with a yearning to overcome national crises of the past, we decided that the same message of hope could be applied to our current national plight posed by the COVID-19 pandemic,” Haein Temple’s Jingak Sunim stated at a press conference held in Jogye Temple in Seoul, Thursday.

The Tripitaka Koreana is a set of 81,352 wooden printing blocks engraved with more than 52 million characters describing Buddhist scripture. Work on it began in 1237 (during the Goryeo Kingdom) and took 12 years to complete. It was believed its production would aid in the protection of the territory following the loss of the original Tripitaka which was lost in a fire during the Mongolian invasion of Goryeo in 1232.

The epitome of an immense national commitment of manpower and resources, the artifact was designated as National Treasure of Korea No. 32 in 1962 and included in the UNESCO Memory of the World Register in 2007.

Those who wish to take the tour around the Buddhist temple and the artifact depository can visit the official website of the Haein Temple and make an online reservation, which will close every Monday at noon.

Each visit will last from 40 to 50 minutes. For preservation and safety reasons, each tour will be limited to a maximum number of 20 visitors ― preschoolers are not eligible to participate.