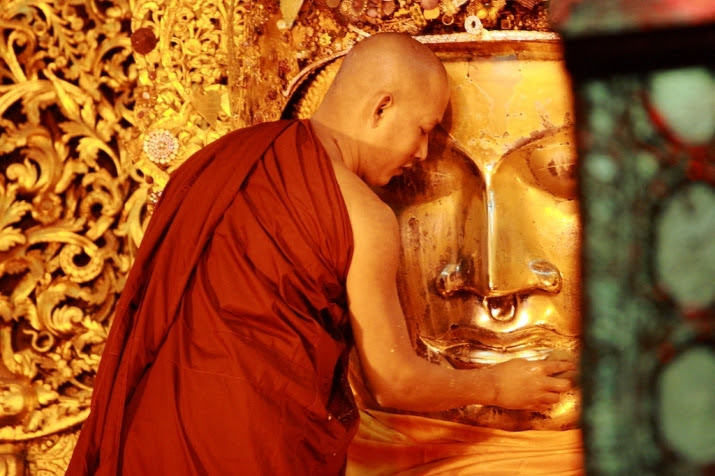 The fault lines of conflict are often spiritual, one religion chafing against another and kindling bloodletting contrary to the values girding each faith.

U Sandi Marbhivamsa, general secretary of the State Sangha Maha Nayaka Committee (SSMNC), made the comments just days after criticizing Buddhists who insult and denigrate other religions. The SSMNC is a government-appointed body of senior monastics that oversees and regulates Buddhist clergy in the country. On 3 June, he told the Myanmar Times that, “Some of Ma Ba Tha’s ideas are aligned partially with those of Mahana [the Sangha] because they are under our guidance. But some Ma Ba Tha members are intense on religion and race and go against the committee’s stance.”

U Sandi also said, “Some Ma Ba Tha members are fiercely against Muslims and don’t follow the former leader’s guidance. Actually they do not represent the whole committee.”

On 30 May, U Sandi, following a trip to Indonesia to attend an interfaith conference, told theMyanmar Times that while the Buddha never attacked other ethnic groups or races, some monks were becoming overtly political with their opinions. “Some monks court political popularity with such views. That kind of provocation is not conducive to peace in the country,” he said. “We in Myanmar can protect Buddhism without insulting other religions. People of different religions can work together in a peaceful way. There is no need for religious extremism. We can learn from Indonesia in that respect.”

He continued: “Buddhism is fundamentally about loving kindness, though other religious [sic] also teach compassion. If we can accept each other’s ideas, there can be peace both in Myanmar and throughout the world.”

This seems to indicate that high-ranking circles within the Burmese Buddhist leadership feel ready to make public statements and gestures of similar weight to when the SSMNC effectively banned the anti-Muslim group 969 in August 2013. This was reported in The Irrawaddy on 10 September 2013, which noted that the committee’s directive declared that the tenets of 969 “were not [in] accordance with the rules and regulations set by the SSMNC. The order, dated Aug. 14, states that it is illegal to form monk networks organized around the principles of the 969.” The SSMNC also prohibited using the emblem of 969 as a Buddhist symbol.

969 was also led by Ashin Wirathu and featured prominently during the troubled years of 2012 and 2013, when 140,000 people, mostly Rohingya, were displaced by violence between Muslims and Buddhists.

This tension between nationalist, anti-Muslim monks and the governing sangha reflects political difficulties on the ground. While the National League for Democracy’s (NLD) Aung San Suu Kyi hasn’t done enough to help the effectively stateless Rohingya, The Diplomat argues that Suu Kyi may be feeling restricted by the grim realities and compromises that characterize statecraft. Tej Parikh argues: “Suu Kyi inherits an inefficient, unskilled, and corrupt bureaucracy, alongside a promise to deliver economic development. Elevating the strife of an estimated 800,000 to 1.3 million minority may pale in comparison, particularly when factoring in a likely lengthy reconciliation process, financial resources, and potential for social instability. . . . Forging peace between Buddhist and minority communities is likely to be more delicate, iterative, and convoluted than external observers can appreciate.”

With the State Sangha Maha Nayaka Committee starting to move, perhaps a long-term game is being prepared by monks and politicians (who appreciate the political realities of anti-Muslim sentiments but do not see a future in such religious, ethnic, and social division) against Ma Ba Tha.

will Buddhists draw inspiration from their faith’s sutras of compassion and peace to counter religious chauvinism? Or will they succumb to the hate speech of radical monks like Burma’s Wirathu, who goads his followers to “rise up” against Islam? The world’s judgment awaits.