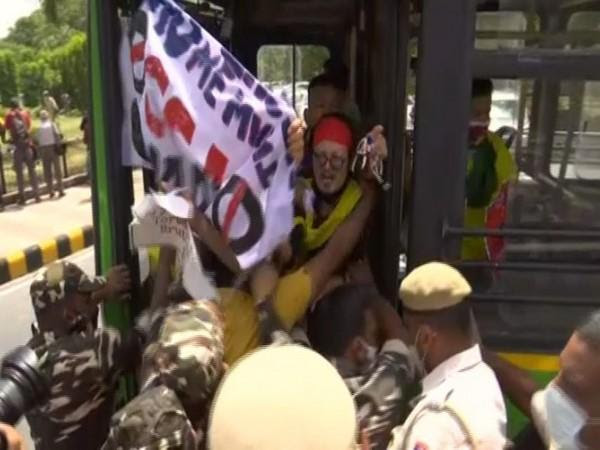 Tibetan Youth Congress (TYC) members on Thursday staged a protest in front of the Chinese Embassy in New Delhi against the centenary celebrations of the Chinese Communist Party (CCP).

Dozens of Tibetans gathered at the Chinese Embassy to protest the cruelty and brutality of the CCP and to send the message that they were putting up an united front against it.

One of the protestors said, “Remember 1950, we are protesting against the centenary celebration of CCP. We want freedom, hail Tibet, while the world is witnessing a river of blood flowing, China is celebrating the 100 years of CCP.”

“We condemn CCP. The very existence of the party is a threat to global peace and harmony. They are the murderers, they are the killers”, said another protestor.

As China marks the 100th founding anniversary of its Communist Party, Tibetan Youth Congress strongly condemned and criticised the very existence of CCP and its establishment at the cost of countless innocent lives and its notorious history of human rights violations said a statement of TYC.

“The painful memories of annexation and occupation of Tibet and killings of more than a million courageous countrymen continue to stay in us and we will strengthen our freedom movement to fulfill their aspirations,” added the statement.

The invasion of Tibet by the CCP in 1959 led 14th Dalai Lama along with 50,000 Tibetan to escape to India and later spread across the globe.

The CCP continues to impose severe restrictions and use brutal measures to suppress and imprison any form of dissent inside Tibet. Due to such aggressive policies, Tibetans inside Tibet have resorted to measures like self-immolation.

Since 2009, 157 Tibetans inside Tibet have set themselves on fire to protest against China’s illegal occupation. Most of the self-immolators called for the return of His Holiness the Dalai Lama and independence in Tibet, read the statement.

Tibetan Buddhism under Communist China went through a dark phase from demolishing more than 5,000 monasteries to the disrobing of 99.9 per cent monks and nuns.

Today in Tibet, the Chinese authorities are gearing up for increased control over Tibetan Buddhism, where monasteries are forbidden to give traditional monastic education which forms an integral part of Tibetan Buddhism, read the TYC statement.

Monks and nuns are, instead, subjected to regular “patriotic education” and other political campaigns that are fundamentally against the basic tenets of Tibetan Buddhism.

Political indoctrination has replaced Buddhist education in monastic institutions where monks are drawn to serve the interest of the Beijing government and are forced to follow CCP’s strict guidelines.

CCP’s authorities are empowered with direct supervision over managing and running the monasteries and nunneries, the statement added.

Apart from that, under China’s occupation, Tibet’s environment has been destroyed, the resources have been illegally mined and transported and the rivers have been polluted.

Their occupation has led the Tibetans devoid of their basic rights and the human rights situation inside Tibet continues to deteriorate and worsen each passing year under the Chinese Communist Party’s oppressive and repressive hardliner policies.

Owing to which Tibet has for the past six years only scored 1/100 and ranked as the least free place in the world for civil rights and political freedoms, TYC statement added.

Genocide and crimes against humanity are becoming a daily occurrence in Tibet, and CCP continues to aggressively pursue assimilation policies in Tibet, Xinjiang, and Inner Mongolia.

Chinese authorities have tightened surveillance ahead of their centenary celebration and continue to detain Tibetans arbitrarily.

“The very existence of CCP is not only a threat to the survival of Tibetan culture and identity, but it poses a grave security threat to the rest of the world. Therefore, it’s high time to scale up the cooperation amongst the democratic countries and strengthen its position against the atrocities committed by the CCP,” said the statement.