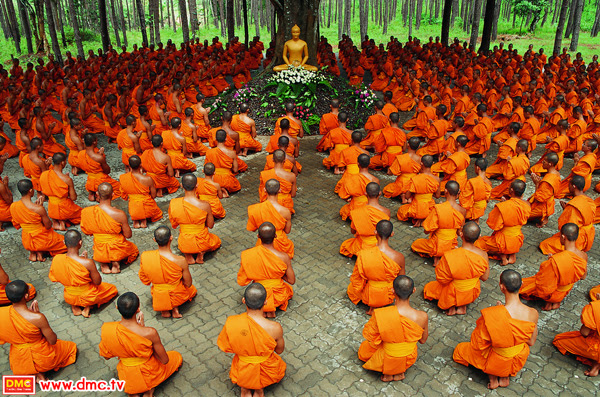 From dmc.tvBuddhists around the world celebrated the beginning of the three-month rains retreat (Vassavasa) on 13 July.

The tradition that monks—who ordinarily would be mendicant wanderers—gather in monasteries during the rainy season for a time of study and religious discourse may derive from the ancient custom among South Asian ascetics of retreating to a forest grove, usually near a village, during the monsoon when travel was difficult. Residing in their retreat during the rains, they continued to pursue their meditative quest and begged alms from local townspeople. The practice was well known in India by the time of the Buddha (6th century BCE), who, after his enlightenment, is said to have spent the rainy season in a sheltered spot in the forest near Banaras (Varanasi).

The Buddha’s followers assumed the same practice and after his death continued to gather during the monsoon to recite the rules of Buddhist discipline and to reaffirm their commitment to the Buddha’s vision of dharma. As the monastic community (the sangha) became wealthier by virtue of larger and more frequent contributions from the laity, more permanent centres, or viharas, were constructed to house the members of the monastic groups during their annual retreats. With the ascendency of the powerful Mauryan king Ashoka (3rd century BCE), who admired and followed the Buddha’s teachings, these viharas flourished throughout northeast India. The viharas are the institutional precursors of both the great Buddhist monastic centres, or Mahaviharas, of South and Southeast Asia and of the custom of the annual religious retreat still practiced in Theravada Buddhist countries today. The vassa has been largely forgotten by Mahayana Buddhists, especially those in China and Japan.

According to Buddhist lore, it was on this day that the historical Buddha, Shakyamuni, famously gave his first teaching at Sarnath after attaining enlightenment. The Buddha gave his first discourse on the Middle Way to five ascetics, former companions during his search for wisdom, who became his first disciples.

“It’s a day that is supposed to commemorate the first sermon preached by the Buddha after he became awakened,” said Dr. Stephen C. Berkwitz, department head of religious studies at Missouri State University. “Because of that, it’s also colloquially called Dharma Day, the day of the Buddha’s teaching. It certainly has special resonance with the exposition of what the Buddha discovered and then taught to his followers. It’s a significant day in the Buddhist calendar.” (Woman’s Day) From theravadacouncil.wordpress.comWhile all monks and nuns are expected to observe the rains retreat, dispensation of up to seven days can be granted under certain circumstances, such as attending to sangha business, giving a Dhamma teaching, or visiting a sick relative.

In the present day, the rains-retreat practice is not limited to the monastic sangha; lay Buddhists can also be found observing the period in Bangladesh, Myanmar, Sri Lanka, Thailand, and elsewhere. During rains retreat, lay followers undertake to observe certain vows and the eight precepts rigorously, engaging in activities such as providing alms to monastics, giving up smoking and intoxicants, practicing meditation, chanting Buddhist suttas, and listening to Dhamma talks.

The end of the rains retreat is marked by the Pavarana ceremony, during which monastic members have an opportunity to admonish one another for any misdeeds during the retreat. This is followed by the Kathina or robe-offering festival, which continues for a further month.

Rains retreat and Pavarana are the most significant religious festivals in Thailand. Both are national holidays, during which it is against the law to sell alcoholic beverages. Bars and entertainment places are therefore closed.