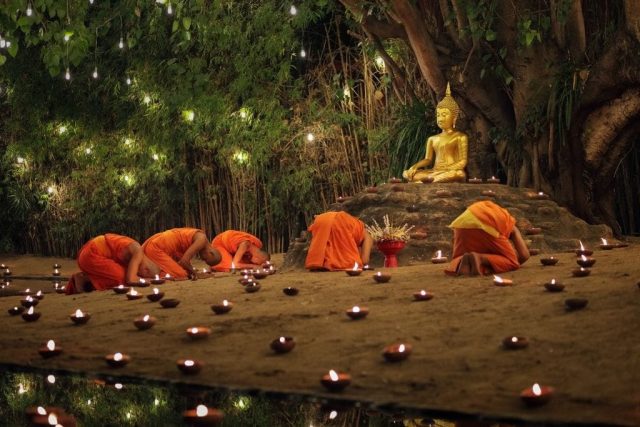 From expique.com
Theravada Buddhism (“doctrine of the elders”) is the oldest and most orthodox of Buddhism’s three major sects. Regarded as the belief closest to the one taught by The Buddha himself, it is based on the recollections of The Buddha’s teachings amassed by the Elders—the elder monks who were Buddha’s companions. Theravada Buddhism is strongest in Sri Lanka, Cambodia, Thailand, Laos, Myanmar (Burma) and the Mekong Delta areas of Vietnam. It is sometimes called ‘Southern Buddhism’.

Theravada Buddhism stresses spirituality, the enlightenment of the individual, self-discipline, the importance or pure thought and deed, the importance of the monastic life and the strict observance of the ancient Vinaya code It has distinct roles for monks and lay people, emphasizes that each individual is responsible for his or her salvation and takes the position that only monks are capable of reaching nirvana. Theravada Buddhism believes that it has remained closest to the original teachings of the Buddha. However, it does not necessarily over-emphasize these teachings in a conservative, fundamentalist way, rather they are viewed as tools to help people understand the truth, and not as having merit of their own.

Theravada Buddhists across the world are celebrating Magha Puja Day, one of the most important Buddhist festivals that extends across many cultures and beliefs. The festival takes place on the full moon of the third month of the lunar calendar, which falls around the last week of February or in early March. This year, the festival is being celebrated on 16 February.

“Every Purnima [full moon] is important for . . . Buddhists, including . . . Maghi Purnima; this is when the grihostho [general public] pray for their salvation and enquire the bhikkhus [monks] for a better life in this world,” explained Sugata Chakma Nanadhan, a former tribal cultural-committee administrator in Bangladesh. “This is also when they pray to achieve the panchasheel (the five precepts) of morality training.” (The Daily Star)

According to tradition, Magha Puja commemorates several important events in the life of the historical Buddha when he was staying at Veluvana, a bamboo grove near Rajagaha in the present-day Indian state of Bihar. On an auspicious day some 10 months after the Buddha’s enlightenment, four things occurred: 1,250 men from various places assembled before him without prior appointment; the Buddha ordained them as monks by saying “ehi bhikkhu” (come, monk); they all became arahats; and the Buddha gave them special instructions, called the Ovada Patimokkha (the Patimokkha Exhortation), laying down the fundamental rules of his teachings.

As these things took place on the day of the full moon, it is also known as Sangha Day (Assembly Day).

The Buddha also announced his demise on Magha Puja Day. It is said that as soon as the Buddha took the decision, a great earthquake was felt. When asked for the reason, the Buddha replied that it was due to his announcement of his great demise. The monks were saddened to hear the announcement, and the Buddha advised them that his death was inevitable, and it was therefore not proper to grieve. From dhammakaya.netMagha Puja Day is especially important in the religious and social lives of the Buddhist community in Bangladesh. Buddhist fairs are organized in many villages, especially in the Buddhist-inhabited villages and monasteries of Chittagong.

“Maghi Purnima is celebrated on a large scale because this month specifically marks the end of the winter season, when the weather is suitable to make any sort of festivity out in the open,” Nanadhan noted. (The Daily Star)

Magha Puja Day is also one of the most important holidays in several Southeast Asian countries, including Cambodia, Laos, and Thailand. There it is celebrated with a series of religious activities such as chanting, making offerings, holding grand parades, and candle-bearing.

Buddhists accumulate merit by going to temples for this special occasion, observing the eight precepts, and participate in many other Buddhist activities. Meanwhile, bars, pubs, nightclubs, and similar venues are banned on Magha Puja Day, along with the serving of alcohol.

Theravada Buddhism mixed with indigenous beliefs (particularly the belief in spirits called nats) and was spread with the help of rich patrons who supported the monasteries and established new monasteries across country that educated the people. In the process, Mahayana Buddhism disappeared.