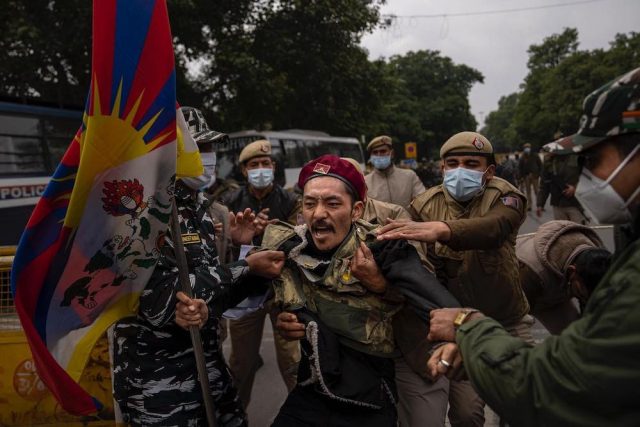 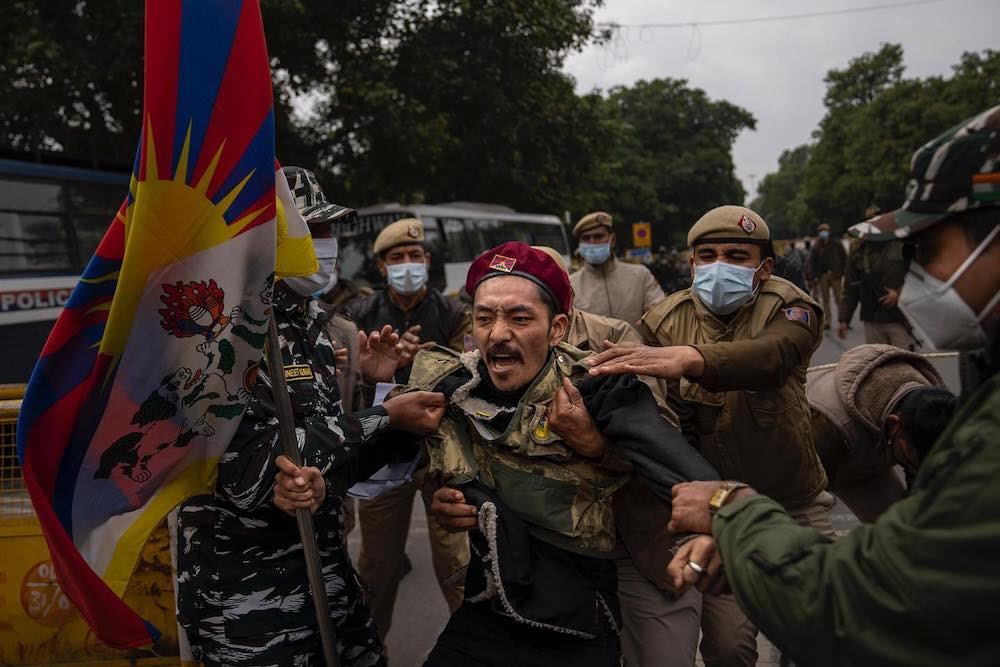 Beijing is the first city to host both the Summer and Winter Olympics. It held the Summer Games back in 2008 and won the host bid for the 2022 Winter Games in 2015.

As the Opening Ceremony draws to its conclusion, the Olympic flag arrives inside the Bird’s Nest stadium.

Six athletes take their time in walking the flag across the floor to the flagpoles at one end. They walk between the motto “Faster, Higher, Stronger – Together” which is beamed all over the stadium floor.

A group of 40 children sing the Olympic anthem as the flag is raised slowly in front of the crowd.

The commencement of the winter Olympics in Beijing on Friday was marked by protests worldwide by Tibetans who accused the International Olympics Committee (IOC) for their complicity in covering up mass human rights abuses by China in Tibet, East Turkestan, Hong Kong, Southern Mongolia and more.

Tibetans in India, UK, Germany, Australia, New Zealand and Europe are collectively holding parallel protests against the opening ceremony of the Winter Games, to be held from February 4 to 20, following up to months of campaigns calling on the international community to boycott or postpone the Olympics over human rights concerns. The five prominent Dharamshala-based NGOs held a press conference, condemning China for going forward with the international Games without confronting the genocide happening inside the occupied regions. Ten activists in Dharamshala participated in a day-long hunger strike protest, marking February 4 as a ‘black day’.

Hundreds of Tibetans in the Indian capital New Delhi also demonstrated against the Beijing government with banners and slogans carrying messages, “No Rights, No Games” and “Say No To Genocide Games” at the site. Three Tibetan activists including poet Tenzin Tsundue were detained in prison for several hours after their protest outside the Chinese embassy in Delhi. Moreover, a few Tibetans and supporters also staged a demonstration outside the Chinese embassy in Mexico to amplify the voices of Tibetans inside Tibet. 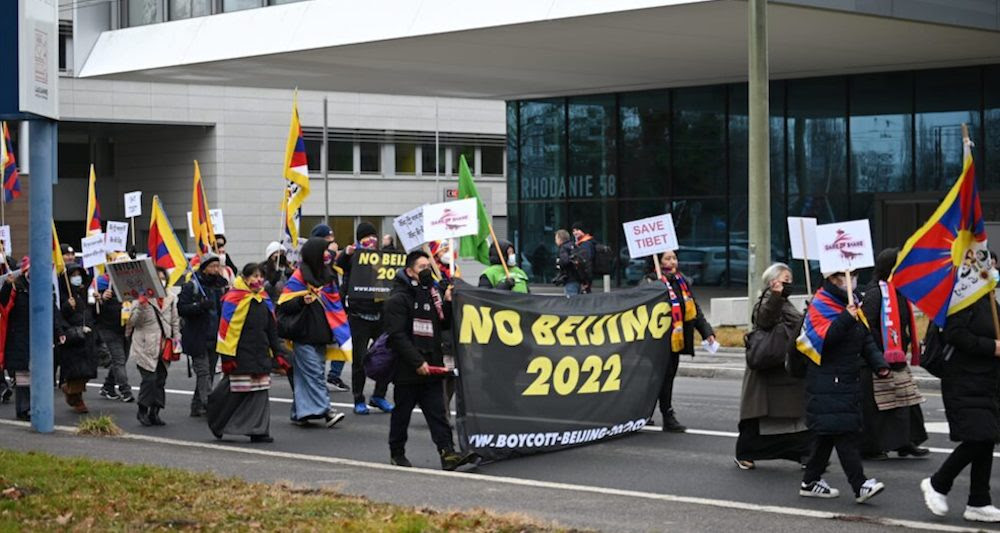 Tibetans in Europe staged a mass protest against the Beijing Olympics at IOC headquarters in Lausanne, Switzerland (Photo/CTA)Around 500 Tibetans marched outside the IOC headquarters at Lausanne, Switzerland on Thursday, led by singer and activist Loten Namling who marched on skis dragging the Chinese flag behind him. Thupten Wangchen, a member of the Tibetan parliament-in-exile, told the Hong Kong Free Press that they were not against the Olympics but by their choice of host, “IOC: please, from now on, in future Olympics, choose a country which has human rights and freedom of religion.”

The ongoing Olympics is one of the most divided sporting events in decades with China not only facing international rebuke and diplomatic boycotts for its poor human rights record but also backlash for scrutiny on visiting athletes. Last week, China warned athletes participating in the event against displaying any “behavior or speeches against Chinese laws and regulations” and said that such conducts would be subject to punishment.

The 2008 political uprising during the Summer Olympics saw widespread protests inside Tibet that resulted in over a thousand arrests of ordinary Tibetans by the Chinese authorities.

Chinese artist Ai Weiwei is once again criticizing China‘s ruling Communist Party — and the International Olympic Committee (IOC), which he said is “ignoring” the safety of the country’s athletes by prioritizing business and “standing next to the authoritarians.”

The IOC “never remained as a neutral position. They’re always standing next to the authoritarians, or business – business is the first target for them,” he told CNN’s Christiane Amanpour. “Since the 2008 Olympics, they have been working with the government’s propaganda, and this time they’re even more. They are, you know, ignoring the top athletes’ from China’s safety and wellbeing, but rather to be part of a state of propaganda, which is, it’s pretty sad.”