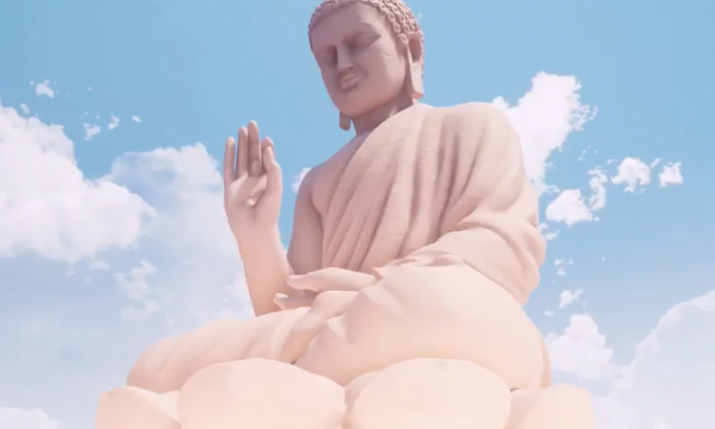 Lumbinī  is a Buddhist pilgrimage site in the Rupandehi District of Province No. 5 in Nepal. It is the place where, according to Buddhist tradition, Queen Mahamayadevi gave birth to Siddhartha Gautama in 563 BCE. Gautama, who achieved Enlightenment some time around 528 BCE,became the Buddha and founded Buddhism. Lumbini is one of many magnets for pilgrimage that sprang up in places pivotal to the life of the Buddha.

Lumbini has a number of older temples, including the Mayadevi Temple, and various new temples, funded by Buddhist organisations from various countries, have been completed or are still under construction. Many monuments, monasteries and a museum, and the Lumbini International Research Institute are also within the holy site. Also, there is the Puskarini, or Holy Pond, where the Buddha’s mother took the ritual dip prior to his birth and where he had his first bath. At other sites near Lumbini, earlier Buddhas were, according to tradition, born, then achieved ultimate Enlightenment and finally relinquished their earthly forms.

Lumbini was made a World Heritage Site by UNESCO in 1997.

In cooperation with Lumbini, Nepal, recognized as the birthplace of the historical Buddha, plans are afoot to make the Spanish city of Cáceres home to a Buddhist complex that features a giant statue of the Buddha, intended to stand as a monument to world peace.

The complex, which will include a garden, a Buddhist monastery, and a stupa, along with a library, relics of the Buddha, and accommodation for up to 20 monks, will be funded by the privately owned Lumbini Garden Foundation. The centerpiece of the new Buddhist complex will be a 40-meter statue of a seated Buddha.

Earlier in January in Lumbini, the mayors of Cáceres and Lumbini, both of which are home to UNESCO World Heritage Sites, signed a memorandum of understanding that twins the two towns.

Lumbini Sanskritik Municipality mayor Manmohan Chaudhary said the project’s aim was “to broadcast the philosophy of peace, which is the message of the Buddha, throughout the world.” (TTG Asia)

The project, which was announced in the Spanish capital Madrid on 22 January, during the first day of the FITUR International Tourism Trade Fair of Madrid 2020, is also expected to provide a tourism boost for Cáceres, especially among Asian visitors.

The mayor of Cáceres, Luis Salaya Julián, observed that the planned Buddhist complex, for which work is expected to get underway later this year, would provide an opportunity for more Asian travelers to become acquainted with Spain and with Cáceres: “It’s an important international business leap for the region, establishing direct relations with the Asian market, one that is so relevant today.” (TTG AsiaCáceres, some 300 kilometers southeast of Madrid, was founded in 25 BCE and is the capital city of Cáceres Province in the Spanish autonomous region of Extremadura. With a population of close to 100,000 people, Cáceres is home to a medieval walled city, the Monumental City of Cáceres, which was listed as a UNESCO World Heritage Site in 1986. The city also lies on the ancient Vía de la Plata (“Silver Way”) of the Camino de Santiago network of pilgrimage trails.

Cáceres will provide a site for the Buddhist complex of some 20–30 hectares, while the Lumbini Garden Foundation is expected finance the construction costs, which have been estimated at €25 million (US$27.5 million), with funding reportedly received from various countries and private donors.

The Lumbini Garden Foundation was established in Madrid in May 2019, with the participation of the municipality of Lumbini. Its stated mission is to promote the Buddhist principles of peace, fraternity, and integration; to coordinate the creation of the Buddhist center in Spain; and to facilitate cooperation and development programs in cultural, social, artistic, educational, tourism, and business areas that complement the activities of the Buddhist complex. The mayors of Cáceres and Lumbini sign a memorandum of understanding twinning the two towns. From khabarhub.com
Share this...