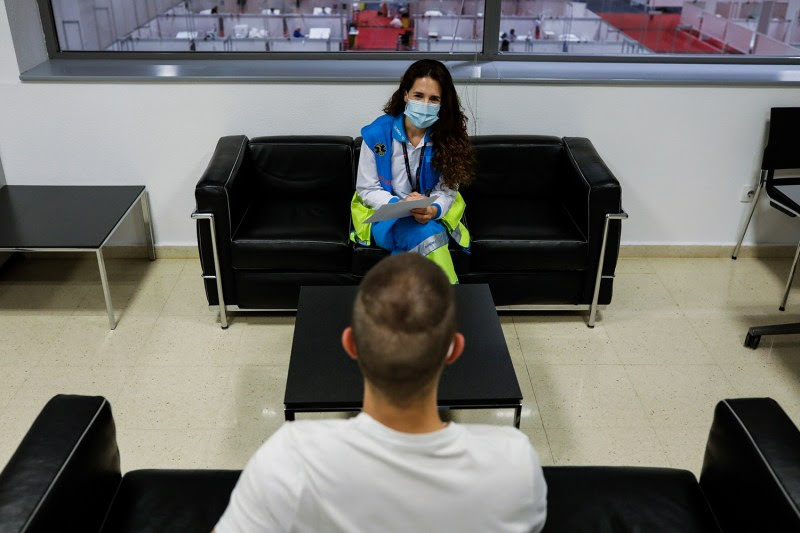 A health psychologist works at a temporary hospital in Madrid on April 25 to provide better support to patients and families who are suffering from the impact of COVID-19. JESÚS HELLÍN/EUROPA PRESS VIA GETTY IMAGES

Lois has bipolar disorder and a 16-month-old baby. In normal circumstances, her condition is manageable. Under the United Kingdom’s lockdown, in which trips outside are tightly limited and seeing family or friends impossible, her mental health has deteriorated. No one is picking up the phone in her National Health Service (NHS) recovery team, part of a branch of mental health services for people with long-term mental health conditions, and the soonest appointment she can get with them is two months away.

Lois, as a young mother with a serious mental health condition, is at particularly high risk. But as lockdowns across the world continue because of the global coronavirus crisis, people with preexisting mental health conditions are seeing symptoms worsen. As Mental Health Awareness week begins in the UK, tens of thousands of people there are already painfully aware of the damage being done, even as the government overlooks psychological costs in favor of economic calculations. According to research from the charity Rethink Mental Illness, 80 percent of people living with serious mental illnesses such as borderline personality disorder and psychosis thought that their mental health was worse because of the impact of coronavirus. Twenty-eight percent described their symptoms as much worse.

I have seen my own mental health fluctuate under lockdown conditions, with the difficulties of loneliness and lack of routine. I have struggled with intrusive thoughts about suicide and depressive days where doing basic tasks to care for myself are near impossible.

Although there is some evidence that lockdown measures have allowed anxiety in some people with generalized anxiety disorder and obsessive-compulsive disorder to lessen, the lockdown is cutting people off from vital treatment, important daily routines, and regular coping mechanisms. Kirsten, who suffers from complex post-traumatic stress disorder, cannot visit the gym or be hugged by her family members. “It’s nigh on impossible to get any help at the best of times, let alone just now,” she said. “So many services aren’t available.”

Spike is in alcoholism recovery and has borderline personality disorder, attention deficit hyperactivity disorder, and body dysmorphia. Even before the pandemic, he was going through a painful recovery process. Spike spent the first three weeks of lockdown “in darkness,” drinking again, frightened and feeling utterly alone. Without face-to-face meetings, Spike’s recovery has stalled.

The lockdown has stripped away most of the routines and mechanisms needed to manage mental health conditions.

The lockdown has stripped away most of the routines and mechanisms needed to manage mental health conditions.

People cannot visit their friends or family, attend in-person therapy sessions or other mental-health appointments, go to groups or classes, or even leave their home as many times a day as they wish to. Regular routines, a critical part of well-being, have been disrupted and replaced with an anxious and uncertain future.Other aspects of the coronavirus crisis are putting huge pressure on mental health. Loss of livelihood and fears about money and where the next meal is coming from are hitting vulnerable families hard. The Trussell Trust, the United Kingdom’s leading network of food banks, reported distributing more food parcels in the first two weeks of the COVID-19 lockdown than ever before, an 81 percent increase on the same period last year.

Around the world, coronavirus has seen a rise in domestic violence and the mental and physical harm that comes with it. Financial insecurity and domestic violence are force multipliers for the impact of mental-health problems, turning manageable problems into crises. So is the isolation of lockdown.

A possible and tragic outcome for sufferers who feel that they cannot continue in pain is suicide. British police have recorded “early signs” of an increase in suicides and attempted suicides, but say it is too soon to describe this as a trend.

However, Fraser Nelson, editor of the Spectator and political columnist for the Daily Telegraph, has said that there could be 150,000 avoidable deaths caused by the U.K.’s lockdown measures, a figure that seems to come from his own speculation. Australian scientists have calculated that the likely deaths from suicide caused by loneliness, isolation, and a lack of access to mental health would be massively outweighed by the lives saved by the lockdown measures—but all such models rely on uncertain assumptions in an unprecedented time. As countries build up experience, the costs may become more apparent.

When asked about the potential spike in suicide rates caused by lockdown measures at his daily briefing, British Prime Minister Boris Johnson replied with the assurance that more money would be directed towards mental-health charities.

While charities do undeniably important work in Britain and around the world, prioritizing them over the mental-health arm of the NHS is a dubious choice. As a department, mental health has been chronically underfunded after a decade of Conservative Party rule in the U.K., while austerity has stripped away other sources of protection and aid. A mental-health nurse, Cara, told Foreign Policy: “Not enough is being done to ensure mental-health services remain accessible but I’m most worried about how services cope when we start to reemerge from this crisis. I can foresee how services are just going to collapse—they’re already stretched and I don’t know how they’re going to cope with the collective trauma and grief that’s going to come out of this.”A spokesperson from Samaritans, which operates the U.K.’s best-known suicide hotline, told Foreign Policy: “Samaritans is a critical service, needed now more than ever. There’s no doubt that these uncertain and challenging times can affect our mental health and wellbeing.

“Our volunteers are as busy as ever providing emotional support to people who are struggling. Currently, one in three calls for help to Samaritans are about coronavirus and we are continuing to hear about struggles with mental health, access to services as well as the impact on basic needs such as food, housing and employment.”

The NHS urgently needs parity of esteem between mental and physical health, which means that both are treated and funded equally. Mental health problems account for 23 percent of the burden of disease in the U.K., but only 11 percent of the NHS budget is spent on supporting people who are struggling with mental illness.

Routine appointments such as mental-health reviews and individual therapy sessions should go ahead for all patients, over the phone or via apps such as Zoom, along with consistent and clear messaging about lockdown measures to prevent further confusion.

Governments worldwide need to treat this growing crisis with the same seriousness that they apply to economic matters—and realize that, in the absence of strong measures such as universal income that alleviate fears, financial stresses will inevitably become mental health issues, and vice versa. Mental ill health will cost Britain and other countries dearly in the future if it is not treated and managed during lockdown. Lives are at stake.