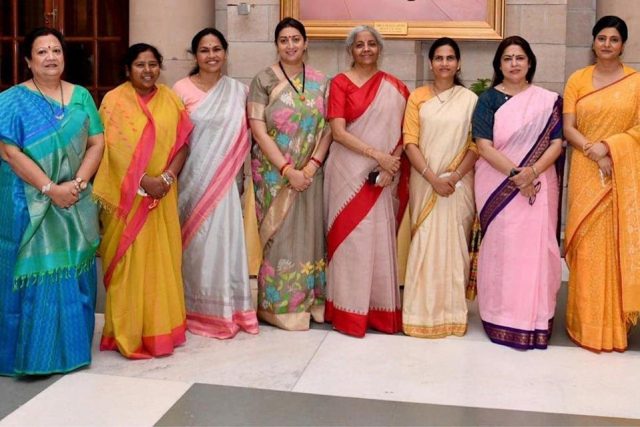 Displaying India’s women power, nine leaders from Prime Minister Narendra Modi‘s council of ministers were seen donning handloom sarees in different styles. While some were spotted in ‘ulta pallu’ saree, some others draped the ‘palla’ over both shoulders.

In the photo, Darshana Jardosh, Lok Sabha MP from Surat, Gujarat, could be seen donning an ‘ulta pallu’ blue and teal coloured sari paired with a brown and golden watch. Next to her was Pratima Bhoumik, who chose a simple look by wearing a yellow saree with a red border.

Next was Shobha Karandlaje donning a silk saree, which was grey in colour with a pink border. Smriti Irani, who was shifted from Textile Ministry on Wednesday, was seen in a stunning embroidered Chanderi handloom saree with floral patterns and a bronze border.

Last year, on National Handloom Day, Irani had urged people to be ‘vocal for local’ and request them to choose clothes made by local brands. Bharati Pravin Pawar wore a plain cream coloured saree paired with a pendant.

Meenakshi Lekhi looked gracious in a pink Gadhwal saree that had a striking blue border with embroidery on it. Lekhi is the second-term MP of Bharatiya Janata Party from Delhi.

Sitharaman caught everyone’s attention with her simple cotton saree. Her sartorial choices have made headlines on many occasions – from donning beautiful handloom sarees to sporting silk sarees.

For the unversed, she likes wearing subtle yet classy handloom and silk sarees to work and it is safe to say that it is her wardrobe arithmetic that gives her appearance a distinct stamp. Seven women MPs took oath as union ministers on Wednesday in the expansion of the council of ministers.

The women MPs who took the oath of office on Wednesday are Anupriya Patel, Shobha Karandlaje, Darshana Vikram Jardosh, Meenakshi Lekhi, Annpurna Devi, Pratima Bhoumik and Bharati Pravin Pawar. The swearing-in ceremony, which took place at Rashtrapati Bhavan amid COVID-19 protocols, came days ahead of the Monsoon Session of Parliament. It was the first expansion of the union council of ministers by PM Modi in his second term.

(with inputs from ANI)