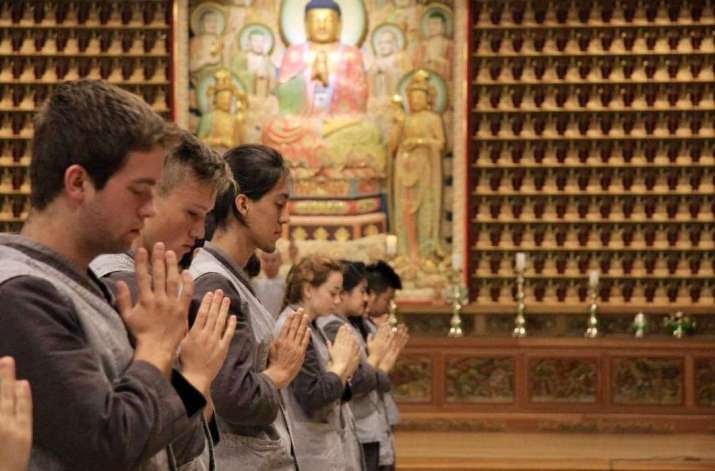 Temple-stay programs are currently limited to individual participants and frontline medical staff. Woljeongsa. From templestay.com
The Jogye Order, officially the Jogye Order of Korean Buddhism  is the representative order of traditional Korean Buddhism with roots that date back 1200 years to the Later Silla National Master Doui, who brought Seon (known as Zen in the West) and the practice taught by the Sixth Patriarch, Huineng, from China about 820 CE.

The Cultural Corps of Korean Buddhism (CCKB), an affiliate of the Jogye Order of Korean Buddhism, South Korea’s largest Buddhist order, said on Monday that it has resumed some temple-stay programs after the Korean government relaxed some social-distancing restrictions following a decline in the number of new COVID-19 infections.

After new daily confirmed COVID-19 cases in South Korea remained below 20 for the past several days, the government recently announced that social distancing would be extended for two weeks, although it has eased some rules, stating on Sunday that temples, churches, bars, gyms, and cram schools could resume operating under strict conditions.

“Due to the prolonged virus pandemic, many people are depressed and tired. To assist the public in overcoming the ‘corona blues,’ we have decided to resume our Templestay program,” Ven. Wonkyung, senior monastic at the CCKB, said in a statement. “Our decision came after the government decided to ease its social-distancing guidelines.” (The Korea Herald)

The CCKB is also offering free temple stays for up to 2,000 frontline medical staff at 16 of its temples before 31 October.

The Cultural Corps of Korean Buddhism was established in 2004 to promote Korean Buddhism and traditional Buddhist culture through cultural experience and education programs, exhibitions, and campaigns. In 2019, 70,520 foreigners were reported to have participated in the program. The Jogye Order has also announced plans to resume some prayer meetings and other public events at temples across the country, in line with social-distancing rules. Participants will be required to undergo temperature checks before being admitted, and seating will be separated by at least one meter. The Jogye Order had postponed all public events since 23 February, including celebrations for the birth of the Buddha slated for April 30.

Other religious communities in South Korea have also announced plans to resume some public services after moving all public gatherings online.* Of the 16 dioceses of the Catholic Church in South Korea, four, including Seoul and Jeju Island, announced on Monday that they would resume holding onsite Masses alongside those held online, with participants required to wear face masks. According to the Christianity Media Forum of Korea, more than 60 per cent of Protestant churches in the country held onsite services last Sunday, and the number is expected to increase this week.

After experiencing an early surge in COVID-19 infections when the novel coronavirus first began spreading from China, South Korea, has since become one of the most successful countries in its efforts to contain the outbreak within its borders. While the pandemic continues to spread exponentially in some parts of the world, Korea has reported a decline in the growth of new cases since early March, a success the government has attributed to a strategy dubbed TRUST: transparency, robust screening and quarantine, unique but universally applicable testing, and strict control and treatment.

Within weeks of the first confirmed case being reported in the country, the Korean government acted quickly to develop a test kit for COVID-19. Since then, some 100,000 test kits per day have been produced, and 600 testing sites set up—including drive-through centers, where people can be tested without leaving their cars. Patients are typically informed of their test results by text message within hours. As a result, the fatality rate in Korea has been relatively low, businesses have largely been able to continue operating, and no cities have been locked down. on 22 nd April, global SARS-CoV-2 coronavirus infections were reported to total 2.57 million, with 177,501 deaths so far confirmed, and 686,634 people recovered.** The World Health Organization in March estimated the mortality rate from the virus at 3.4 per cent, based on incomplete and preliminary data, with the elderly and people with underlying health conditions considered most at risk. South Korea has to date reported 10,694 confirmed infections, with 238 deaths and 8,277 recovered.

The virus that causes COVID-19 is mainly transmitted through droplets generated when an infected person coughs, sneezes, or exhales. These droplets are too heavy to hang in the air, and quickly fall on floors or surfaces.
You can be infected by breathing in the virus if you are within close proximity of someone who has COVID-19, or by touching a contaminated surface and then your eyes, nose or mouth.
Share this...