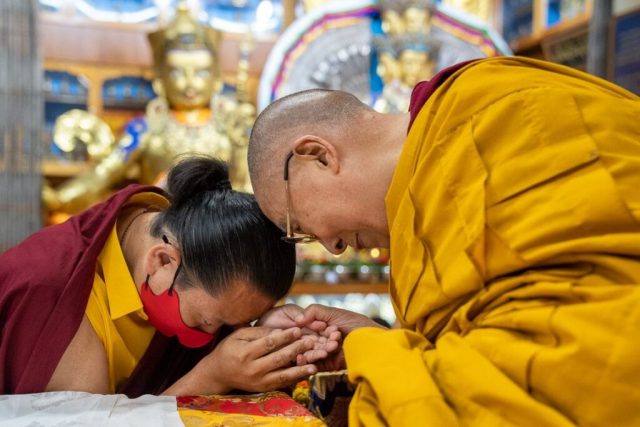 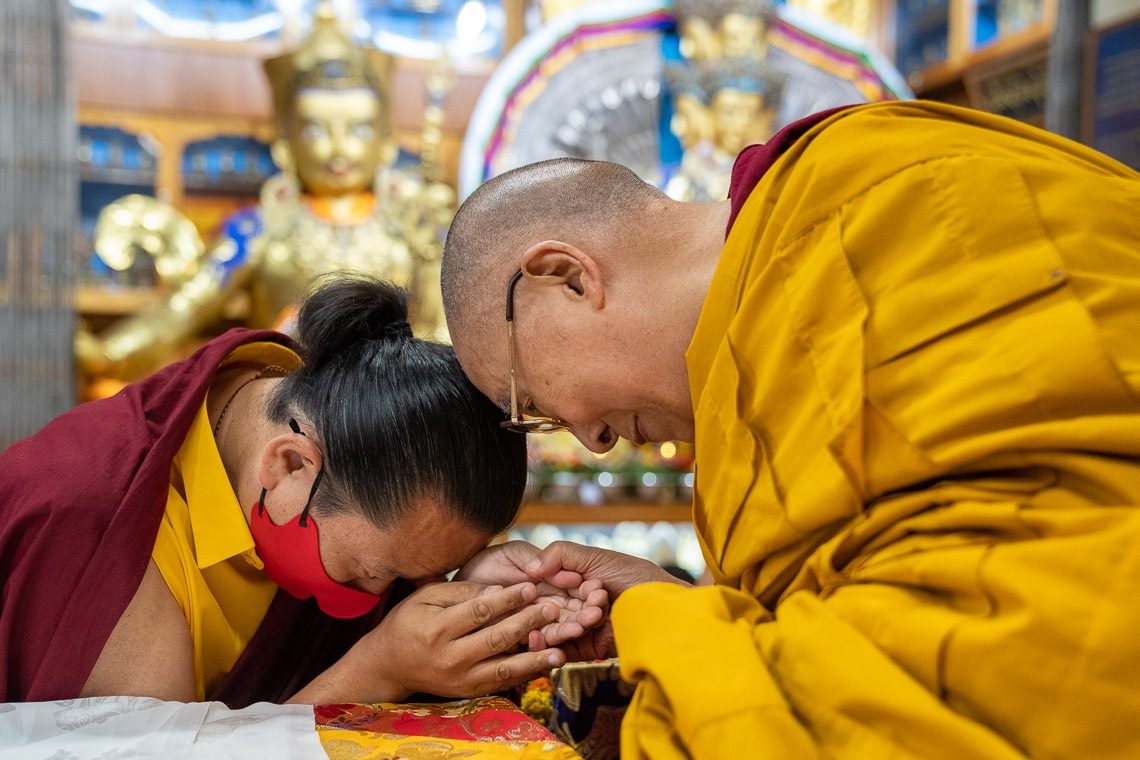 His Holiness the Dalai Lama greeting the 43rd Sakya Trizin Gyana Vajra Rinpoche on his arrival at the main Tibetan temple to attend a long life offering ceremony in Dharamshala. Photo/Tenzin Choejor/OHHDL

This morning a Long Life Offering was presented to His Holiness the Dalai Lama by members of the Sakya Tradition of Tibetan Buddhism at the Tsuglagkhang, the Main Tibetan Temple in Dharamsala. Hierarchs of both palaces, the Dolma Phodrang and Phuntsok Phodrang, headed by Sakya Dagtri Rinpoché, led the ceremonies.

Sakya Dagtri Rinpoché greeted His Holiness as he stepped out of his car just inside the gate to his residence. The two of them walked steadily through the gate and into the garden, where they were welcomed by a group of dancing drummers. Walking through the garden, His Holiness smiled and waved to members of the public, stopping occasionally to greet young children. He rode the recently installed lift up to the temple veranda and continued to engage with the public on his way round to the temple door.

Once His Holiness was seated on the throne, the Sakya Lamas offered scarves in welcome and the ceremony began. Tea and sweet rice were distributed while the congregation recited the mantra of White Tara.

After the text of the long life prayer had been recited, statues of the deities of longevity, White Tara, Amitayus and Ushnishavijaya, were presented to His Holiness. Sakya Dagtri Rinpoché then offered him a bowl full of long life pills. His Holiness took one for himself and gave another back to Sakya Dagtri Rinpoché, a process he repeated when he was given a spoonful of long life nectar.

Avikrita Vajra Rinpoché offered a mandala and representations of the enlightened body, speech and mind in thanks to His Holiness for agreeing to remain. 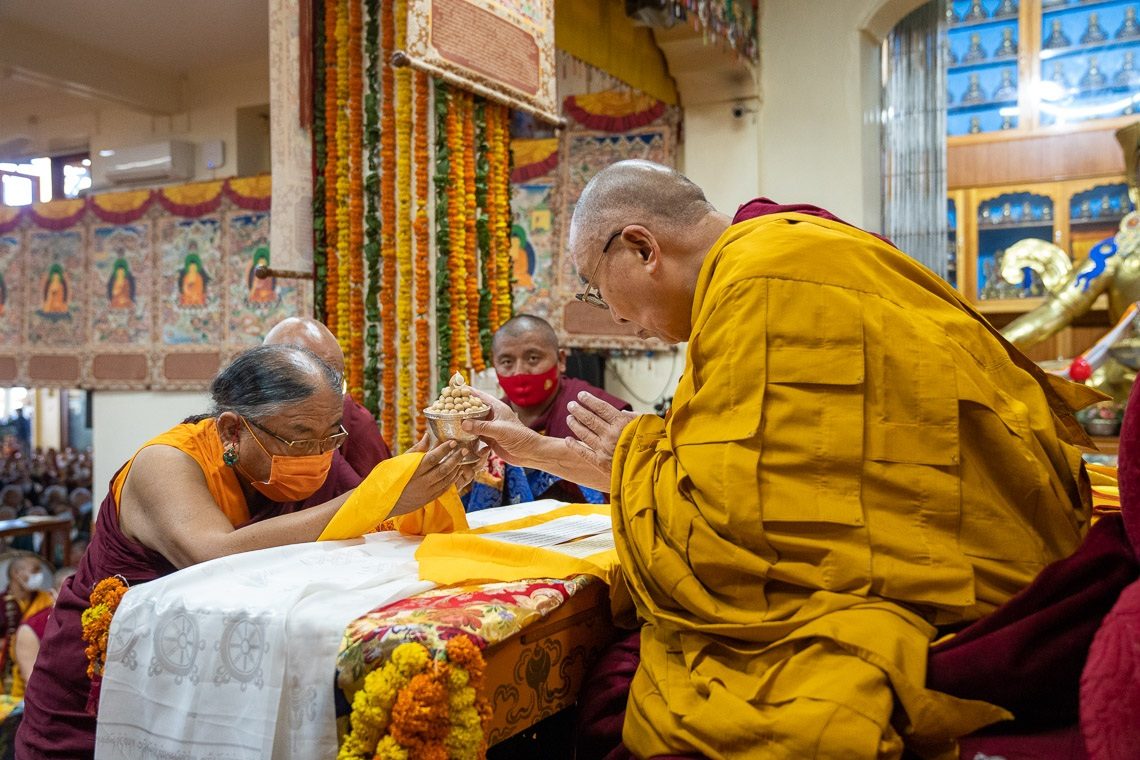 His Eminence Sakya Trichen presenting traditional offerings to His Holiness the Dalai Lama during the Long Life offering ceremony at the Main Tibetan Temple in Dharamshala. Photo/ Tenzin Choejor/OHHDL

Meanwhile, a procession of members of the Sakya community, monastics and laypeople carrying a variety of offerings to His Holiness, made its way through the temple. The line ended with an elderly white-haired man and someone carrying the flag of Tibet.

Another Sakya hierarch, a monk, Abhaya Vajra Sakya, offered the three robes of a monk and a khakkhara, a Buddhist monk’s staff. These were followed by silver emblems representing the eight auspicious symbols. His Holiness again put on the Sakya hat as he received a plateful of Tsog. Another young hierarch from the Phuntsok Phodrang, Asanga Vajra Sakya, concluded the offerings with a presentation of silver symbols representing the eight auspicious substances. When each of the Sakya hierarchs had played his part in the ceremony His Holiness offered him a white scarf and red ‘protection thread’ in gratitude.

“Led by Sakya Dagtri Rinpoché,” His Holiness told the congregation, “members of the Dolma and Phuntsok Phodrangs have today made this long life offering based on the Wish-fulfilling Wheel of White Tara.

“I’ve received the Hévajra and Lam-dré—Path and Result—teachings from Chopgyé Trichen Rinpoché. Each Tibetan Buddhist tradition has its own unique teaching and these are the teachings unique to the Sakyas. I do the Hévajra practice every day, so I may be counted as among the line of Sakya practitioners.

“Thank you for this long life offering. If I don’t live long, there’s a chance the Tibetan people’s wishes and aspirations will not be fulfilled. For this reason I pray that I will live to be more than a hundred and I ask you too to make the same prayer.

“Tibet is our own land and Sakya is a place characterized by the grey earth of the Ponpori Hills. We Tibetans are upholders of Buddhist traditions including the Vajrayana. You too preserve teachings of both Sutra and Tantra. I request you to keep these traditions alive.

“I’ve known Sakya Dagtri Rinpoché since he was very young. That’s all I have to say just now.”

As dedication prayers were said, flower petals were tossed into the air. 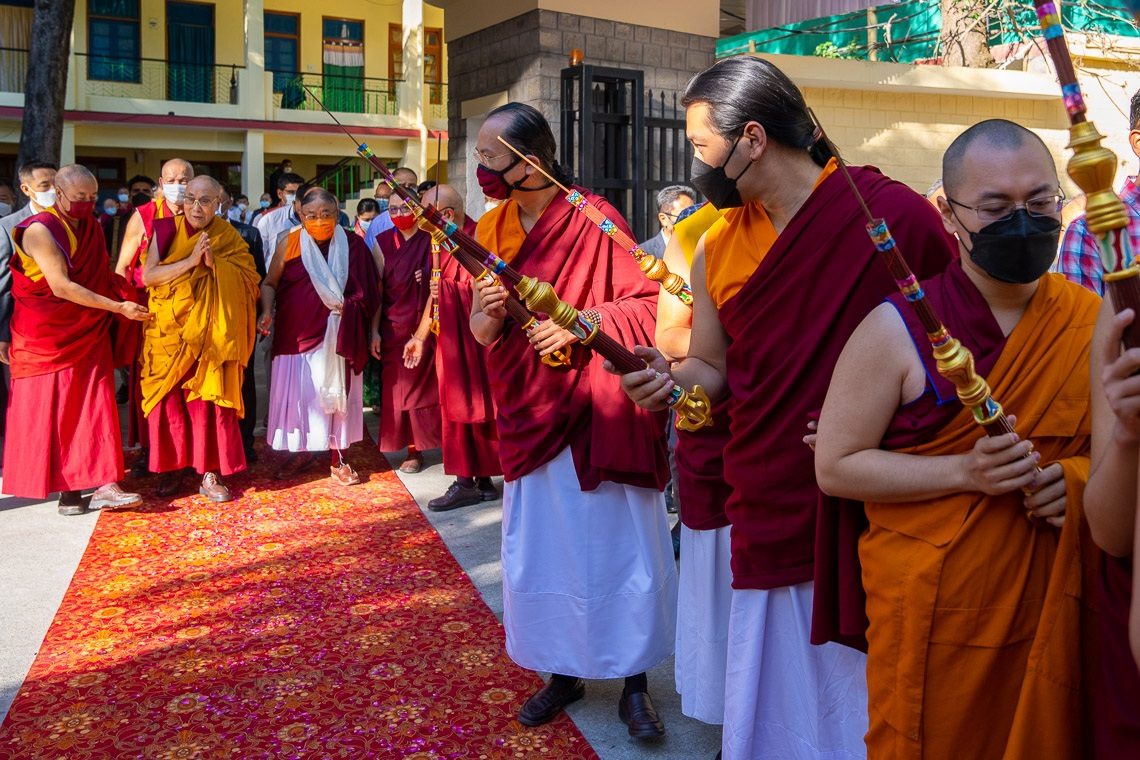 Senior monks of the Sakya Buddhist Tradition leading His Holiness the Dalai Lama to the Main Tibetan Temple for a long life offering ceremony. Photo/Tenzin Choejor/OHHDL

His Holiness stepped down from the throne and mentioned that he had been reminded of Tagdrag Rinpoché, one of his root lamas, who would recite a verse that said, ‘May the Lamas and disciples not be separated’ and would look teasingly at His Holiness on the throne when he repeated the lines, ‘May they enjoy tea and liquor continually, and may there be happiness and auspiciousness forever.’ 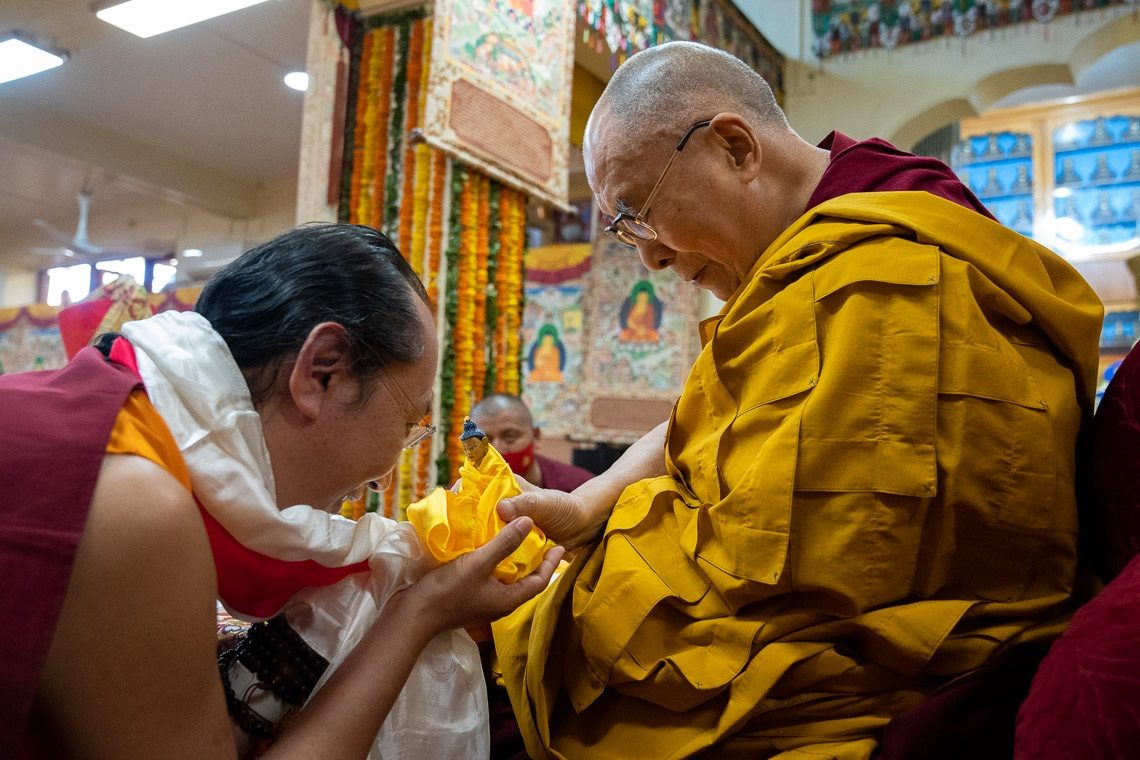