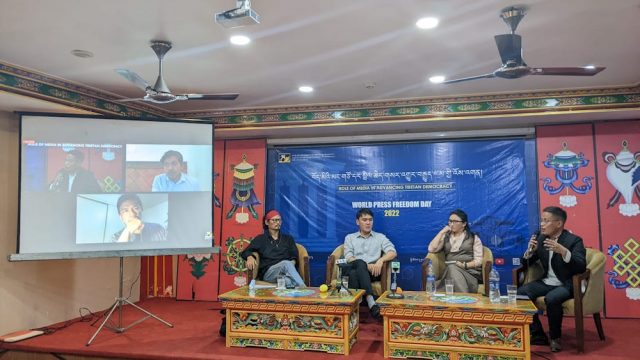 DHARAMSHALA, May 3: On the occasion of World Press Freedom Day, a roundtable with a diverse panel discussed the role of media in strengthening democracy on Tuesday, hosted by the research organization Tibetan Centre for Human Rights and Democracy in Dharamshala. The panel discussed the challenges and the drawbacks faced by the media community in exile, by noting risks and opportunities that could help further strengthen the novice democracy.

MP Pema Tso noted how social messaging apps have become sources of information from inside Tibet, which then presents both opportunity and risk to report on certain news. “We cannot possibly go to a sensitive region in Tibet to gather information. But what we can do is work with a sense of duty for both the struggle and the people inside Tibet,” she told the gathering.

The emergence of social media has made possible both rapid flow of information and platform for hate speech against a community or an individual in the last decade. Deputy Program Director at Tibet Fund Sherab Woeser listed down his experiences to explain certain rigidities that stem from being in the exile setup whilst also criticising CCP and its policies. “My work in the field of media mostly focussed on news inside Tibet and that should still be the primary subject of concern for the Tibetan public. However, we need to be more resilient in choosing the right kind of material for our readers, and weigh different consequences whether it is in the context of foreign media or to curb online disinformation in exile,” he said while responding to a query from the crowd.

Parliamentarian Lobsang Gyatso highlighted the risks of digital security in the age of social media. “In the past decade, with the growing online presence, more platforms are created for the public to engage in producing news content. So there needs to be a fundamental change in the structure of news media,” he said in his opening remarks, adding that the media has an added responsibility of indulging in “aggressive” reporting when it comes to issues of justice.

The question of assertive reporting was also raised by former TCHRD researcher Tenzin Nyinjey with regards to holding people in positions of power accountable even in the Tibetan diaspora. “Issues faced by the ordinary public must be at the forefront of discussion in the media. Holding accountable the elected government, organizations and individuals in power that can use their positions for personal gain; that is the work of a journalist,” he said noting that journalists should indulge in research to report on pertinent issues.

The question of reviving media in the changing world of online news production was also posed by the poet Tenzin Tsundue. He pointed out that coverage of the CTA-run Tibet TV and Tibet.net tends to focus on events more than pressing issues. “The news from CTA mostly focuses on reporting visits by Tibetan leaders or about undertaken initiatives. It sometimes seems that the elected head is more important than the public. Here, I am talking about both the current and previous Sikyong[s],” he further said.