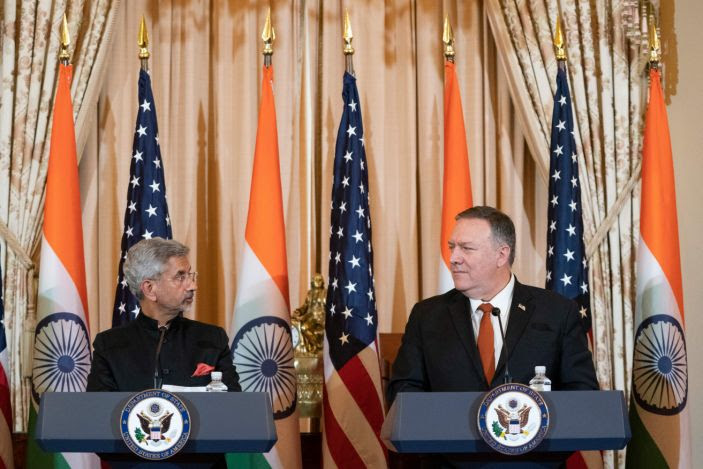 Indian and Chinese troops were engaged in a bitter standoff in several areas along the Line of Actual Control in mountainous eastern Ladakh for close to four weeks. Both the countries are holding talks at military and diplomatic levels to resolve the dispute.

On May 5, the Indian and the Chinese army personnel clashed with iron rods, sticks, and even resorted to stone-pelting in the Pangong Tso lake area in which soldiers on both sides sustained injuries

In a separate incident, nearly 150 Indian and Chinese military personnel were engaged in a face-off near Naku La Pass in the Sikkim sector on May 9.

‘We see even today increasing forces of China moved up to the north of India on the Line of Actual Control there on the Indian border,’ Pompeo told Marc Thiessen and Danielle Pletka of AEI’s ‘What The Hell Is Going On’ Podcast on Monday.

The Communist Party of China continues to hide and obfuscate and delay the global response to the coronavirus pandemic that began in Wuhan. It has taken actions destroying the amazing freedoms of the people of Hong Kong, he said, referring to a controversial law under which China can establish the presence of its security forces in Hong Kong.

‘Those are just two pieces of the behaviour of this regime of the Chinese Communist Party. The nature and the activity that they’re undertaking, the continued efforts to steal intellectual property, to advance in the South China Sea,’ he said.

Globally more than 375,000 people have died and over 6.2 million tested positive. In the United States, more than 100,000 Americans have died due to COVID 19. The pandemic further fuelled tensions between China and the US, which claims the virus came from a bio-lab in Wuhan.

China has been fast expanding military and economic influence in the Indo-Pacific region, triggering concern in various countries of the region and beyond.

China is engaged in hotly contested territorial disputes in both the South China Sea and the East China Sea. Beijing has built up and militarised many of the islands and reefs it controls in the region. Both areas are stated to be rich in minerals, oil and other natural resources and are vital to global trade.

Pompeo said that these are the kinds of actions that the authoritarian regimes take, and they have a real impact not only on the Chinese people there in China and Hong Kongers in Hong Kong, but a real impact on people all around the world.

‘The United States has a responsibility and the capability to push back against that, ensure that the American people are properly served by a foreign policy that recognises the threats that emanate from China today,’ he said.

Responding to a question, Pompeo said that the recent Chinese actions, be it on the India border, or Hong Kong or the South China Sea, have been part of the Chinese behaviour in the recent past.

‘It’s not just over the past six months. We’ve seen over the past number of years continued Chinese build out of their military capabilities, and then continually more aggressive action. I mentioned India. You’ve mentioned the South China Sea.

‘We see these same kind of things with them attempting to build ports around the world as part of their Belt and Road Initiative, places where they can move the People’s Liberation Army Navy. We’ve seen their continued efforts to expand militarily,’ Pompeo said.

China claims almost all of the South China Sea. Vietnam, the Philippines, Malaysia, Brunei and Taiwan have counter claims over the area.

The Belt and Road Initiative is a multi-billion-dollar initiative launched by Chinese President Xi Jinping when he came to power in 2013. It aims to link Southeast Asia, Central Asia, the Gulf region, Africa and Europe with a network of land and sea route.

For the past 20 years, the US has not responded to these things in a real way, Pompeo said.

‘We’ve viewed the 1.5 billion people in the Chinese market as so important to the American economy, and the risk that the Chinese would respond by closing us out for the favour of some other nation – I think people have just been too worried about that to actually take the responses that we take to every other country that behaves in the way that China has done,’ Pompeo said.

President Donald Trump has not done that, he asserted.

‘Trump’s made it very clear whether it’s the signature issue on trade… reciprocal trade… and now beginning to move to all the other elements of power that the Chinese Communist Party is trying to expand,’ he added.

China’s Foreign Minister Wang Yi has accused the US of pushing the bilateral ties to the brink of a ‘new Cold War’ by spreading ‘lies’ about the coronavirus and said it was open to international efforts to identify the source of the deadly virus.

“It is the most regrettable that while the coronavirus is still out there, a ‘political virus’ is also spreading in the US and jumping at any opportunity to attack and slander China,’ Wang said during his annual press conference on the sidelines of China’s annual session of the National People’s Conference last week.