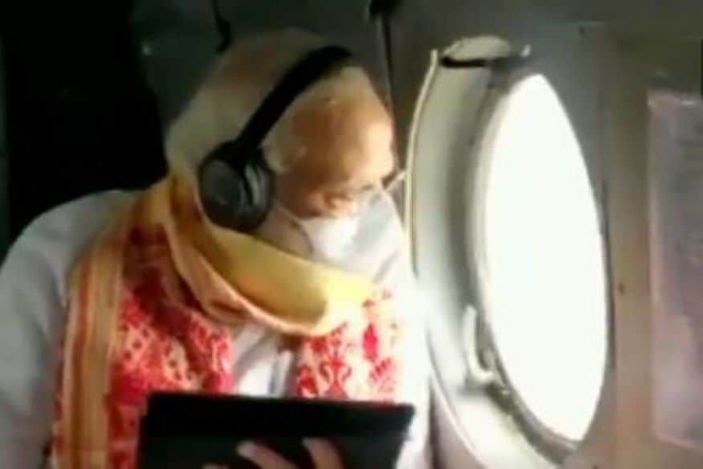 people have taken serious note of the benefits of yoga amid the coronavirus health crisis, Prime Minister Narendra Modi said on Sunday, noting that it is good for “community, immunity and unity”.

In his monthly “Mann ki Baat” radio address, the prime minister also urged people to participate in an online yoga competition being organised by the Ayush Ministry.

He said during the ongoing health crisis, he spoke with many world leaders. “I would like to share a secret today- I’ve observed that during deliberations between world leaders, a lot of interest is evinced in yoga and Ayurveda. Many leaders asked me if yog and Ayurved could be of help in this calamitous period of coronavirus,” he said.

Ayurveda is an ancient Indian medicine, the philosophy of which is based on a comprehensive study of the man’s individuality, his characteristics and connection with the entire world.

In Ayurveda the health, mind and spirituality have to go along and develop together. Because it is not enough just to be alive, you have to have higher goals and aspirations that will make your life meaningful and valuable. Ayurveda defines wellbeing as harmony of the body, mind and higher Self. And exactly this drive to the Self  connects this science to Yoga.

Yoga relates to our consciousness as our main center. This is a science, the main goal of which is man to reach pure consciousness, internal harmony and bliss.

The term „yoga” also comes from sanskrit and means „union”, „unity”. Yoga is not only a path from the physical to the spiritual, but it is a union between the individual and universal consciousness. It balances the mind and body by gradually allowing the person to rediscover his full potential at all levels – psychological, physical and spiritual.

Referring to the ‘International Yoga Day’ on June 21, he said as yoga is getting integrated with people’s lives, the awareness about their health is also continuously on the rise.

“During the present Covid-19 pandemic, it is being observed from Hollywood to Haridwar that, while staying at home, people are paying serious attention to yoga. People everywhere want to know more about yoga and along with it Ayurveda and adopt it as a way of life,” he said.

Many people who had never practiced yoga, have either joined online yoga classes or are also learning it through online videos, he said.

“Truly, yoga is good for community, immunity and unity,” he said. He said during the present health crisis, yoga has become all the more important as the novel coronavirus affects respiratory system.

Yoga has various “pranayams” that strengthen the respiratory system, he pointed out. The Ayush Ministry has started its International Video Blog competition titled ‘My Life, My Yoga’ in which people from across the globe can participate.

To participate, people will have to make a three-minute video and upload it. “In this video, you have to perform yoga or asana, that you usually do and also tell about the changes that have taken place in your life through yoga,” he said.

The prime minister also referred to the World Environment Day being observed on June 5. The theme this year is Biodiversity.

“This theme is especially pertinent in the current circumstances. During lockdown in the last few weeks the pace of life may have slowed down a bit but it has also given us an opportunity to introspect upon the rich diversity of nature or biodiversity around us. Much of the avian fauna had sort of disappeared due to sound and air pollution, and now after years people can once again listen to their melodic chirping in their homes,” he said.

He also pitched for saving rain water, saying the traditional conservation methods are in the form of very simple remedies, and employing these “we can tap the water”.

“If the water is retained for five days or a week, not only will it quench the thirst of mother earth, it will seep into the ground, and the same percolated water will become endowed with the power of life and therefore, in this rainy season, all of us should strive to save water, conserve water,” he suggested.

He also urged people to plant trees and make resolutions so that a daily relationship with nature can be forged. Temperature is on the rise, so do not forget to “facilitate water for the birds,” he said.

The goal of Yoga, as well of Ayurveda is to help the man and to take care of his wellbeing.

Ayurveda provides the basis for the health and wellbeing of the body and mind by reccommending the right diet, herbs, exercises, massages and lifestyle. Yoga, on its part, teaches us how to develop higher consciousness through various methods, asanas, pranayama and meditation.