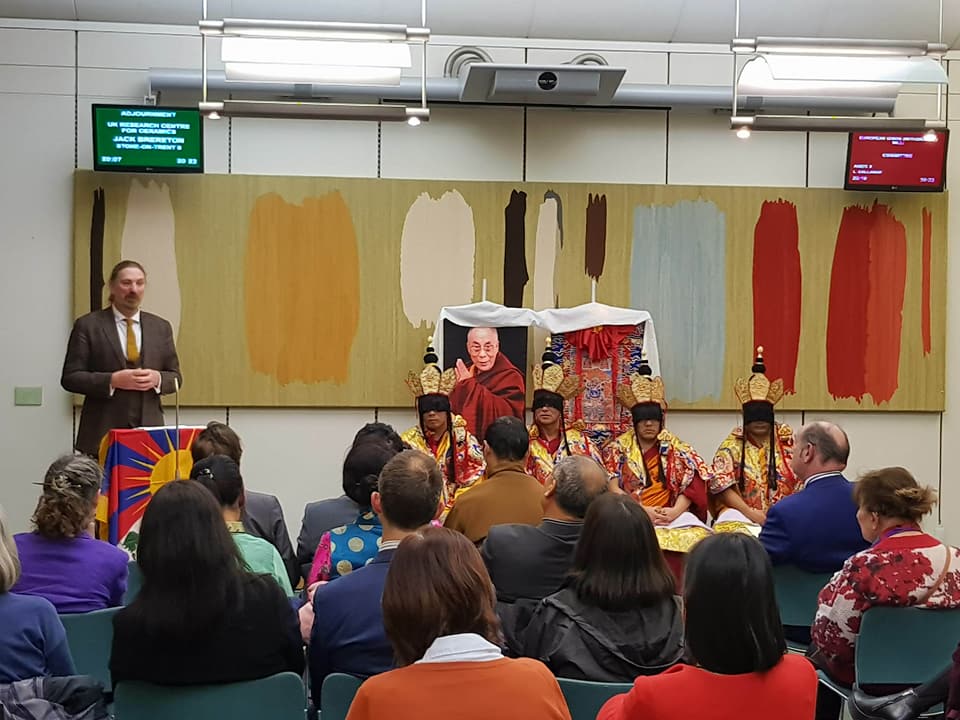 2018 Losar Festival is also Tibetan New Year festival. In ancient times when the peach tree would blossom, it was considered the start of a new year. Since the systematization of the Tibetan calendar in 1027 A.D. the first day of the first month is fixed as the beginning of the New Year. On New Year’s Day, families unite and ‘auspicious dipper’ is offered, and the words ‘Tashi Delek’ are used for people to greet one another. This day is an occasion when Tibetan families reunite to expect fortune in the coming New Year and is known as Losar.

Tibet Society, UK and the All-Party Parliamentary Group for Tibet (APPGT) hosted a joint reception to celebrate the Tibetan New Year (Losar) in the UK Parliament on 21 February.

The reception included a performance by monks from the Gyuto Monastery in India who are world renown for their deep harmonic chanting of traditional Tibetan prayer as well as a performance by members of the Tibetan Community in Britain, Jamyang Dorjee and Tenzin Samphel.

The Gyuto order was originally based in Lhasa, Tibet but following the Chinese invasion in 1950, thousands of men, women and children were massacred. Only 59 Gyuto monks were able to escape and followed His Holiness the Dalai Lama into exile in India.

Speaking at the reception, Tsering Tashi, vice-chair of Tibet Society said, “Today, there are over 500 monks living in the Gyuto monastery in India and through their hard work and dedication, they have been able to keep alive the Gyuto’s unique tradition of overtone prayer chanting dating back more than 600 years.” He also added that the Gyuto monks “are and have been the most wonderful ambassadors for the just cause of Tibet, Tibetan culture and world peace.”

During the event, the Gyuto monks expressed their concern at the ongoing human rights situation in Tibet: “We are deeply concerned at the lack of religious freedom in Tibet, which is currently occupied by China. We would like to take this opportunity to urge all the parliamentarians as well as the UK government to press China to respect the right to freedom of religion and belief for all peoples in China and in our Tibetan homeland.”

Co-Chair of the APPGT, The Rt Hon Chris Law MP, encouraged his fellow MPs to join the group in promoting and protecting human rights in Tibet and reiterated his firm belief in the right of the Tibetan people to self-determination.

The reception ended with President of Tibet Society, The Rt Hon Norman Baker, handing out Khatas (a Tibetan scarf offering) and certificates to MPs, diplomatic staff and highly valued supporters of the Tibetan cause.

This was the first ever Parliamentary Losar reception, hosted by Chris Law MP, Co-Chair of the APPGT and compered by Rt. Hon. Norman Baker, President of Tibet Society and we hope this to be an annual event going forward.

Others in attendance were MPs, Representatives of various diplomatic embassies, International Campaign for Tibet, Free Tibet, Tibetan Community of Britain, Lelung Dharma Centre and members of the Tibet Society.