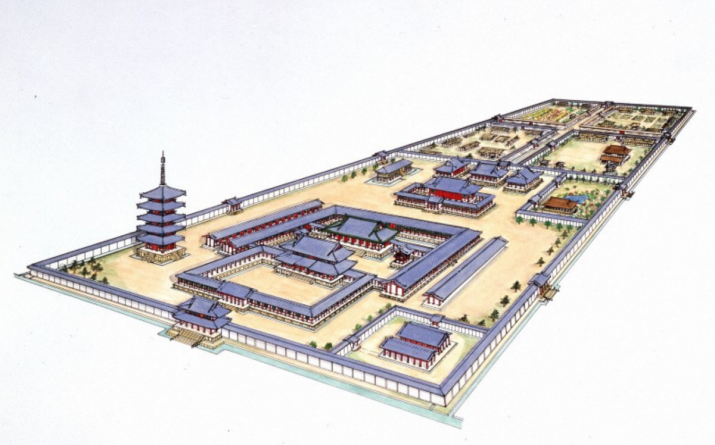 Artist’s impression of how the Sai-ji complex appeared during the Heian period. The lecture hall is the largest of the four buildings in the center. From mainichi.jp

The stone foundations for a ninth century Buddhist teaching hall and a five-story pagoda have been uncovered at the site of a long-vanished Buddhist temple in Kyoto, city officials announced on Friday.

The structures would have been part of the ancient temple of Sai-ji, which was founded in 796 CE together with its still-extant sister temple To-ji, now a listed UNESCO World Heritage site as part of the Historic Monuments of Ancient Kyoto. The construction of the temples followed the relocation of the Japanese capital to Heian-kyo (one of several former names for what is now Kyoto) in 794 from the former capital Nagaoka-kyo, marking the beginning of Japan’s Heian period (794–1185).

“These are very valuable findings to know about what it was really like at Sai-ji . . . a major temple which along with its counterpart To-ji . . . was one of Heian-kyo’s signature structures,” city officials said on Friday. (The Mainichi)

According to the city of Kyoto’s department for the protection of cultural assets, the finds mark the first-ever discovery of structural remains from Sai-ji. Records indicate that most of Sai-ji was destroyed by fire in 990, and the remaining five-story pagoda burned down in 1233, during the Kamakura period (1185–1333). The foundations of what is believed to have been a five-story pagoda at the Sai-ji excavation site in Kyoto. Photo by Masateru Sawaki. From mainichi.jp Platform stones for a Buddhist lecture hall at the Sai-ji temple excavation site. Photo by Masateru Sawaki. From mainichi.jp

“I was surprised that structural elements of Sai-ji . . . remain in such good condition,” said Kindai University archaeology professor Nobuya Ami. “It is an epochal find for understanding Heian period buildings.” (The Mainichi)

Sai-ji and To-ji (the “sai” in Sai-ji means “west,” and the “to” in To-ji means east) were two of only three Buddhist temples permitted in the capital at the time, together with Shingon-in housed in the imperial palace.

Based on the location, size, and estimated date of construction, researchers posit that the recently discovered architectural ruins include the base of a five-story pagoda at Sai-ji. According to historical records, Sai-ji was home to a pagoda similar to the five-story wooden example that still stands at To-ji. The historical document Nihon Sandai Jitsuroku (True History of Three Reigns of Japan), excavation survey records, and other sources indicate that Sai-ji and To-ji were built symmetrically on either side of Heian-kyo’s city gate known Rajomon.

Artist’s impression of the original layouts of Sai-ji and To-ji in Heian-kyo. From asahi.com

“The pagoda in Saiji temple is thought to be at a location directly opposite the five-story pagoda in To-ji temple, so the remains are highly likely to be it,” said Prof. Ami. (The Asahi Shimbun)

Earthenware artifacts excavated at the site provide further evidence that the Sai-ji pagoda was built in the mid-to-late ninth century, corresponding with historical records, which state that construction began in 882. The layout and distance between the pillar bases at 3–3.5 meters are almost identical to the pagoda at To-ji.

Buddhism, Taoism and other Chinese influences reached their height in Japan during the Heian period, with Buddhism spreading primarily through the Tendai and Shingon schools, which evolved from the Tiantai and Chen Yen schools of Chinese Buddhism, respectively. The Heian period is also considered the peak of the Japanese imperial court and is particularly noted for the art, poetry, and literature produced during the era. A view of the To-ji complex in Kyoto. From wikipedia.org

Buddhism and Shinto are the two most widespread religious traditions in modern Japan, with 79.2 per cent of the population identifying as practicing Shinto and 66.8 per cent identifying as Buddhists, indicating a high level of overlap between the two traditions, although, somewhat paradoxically, a majority of Japanese also identify as atheists for a number of cultural reasons. Christians represent 1.5 per cent of the population, while other religions make up a combined 7.1 per cent, according to data for 2017. The most popular schools of Buddhism are Nichiren, Pure Land, Shingon, and Zen.