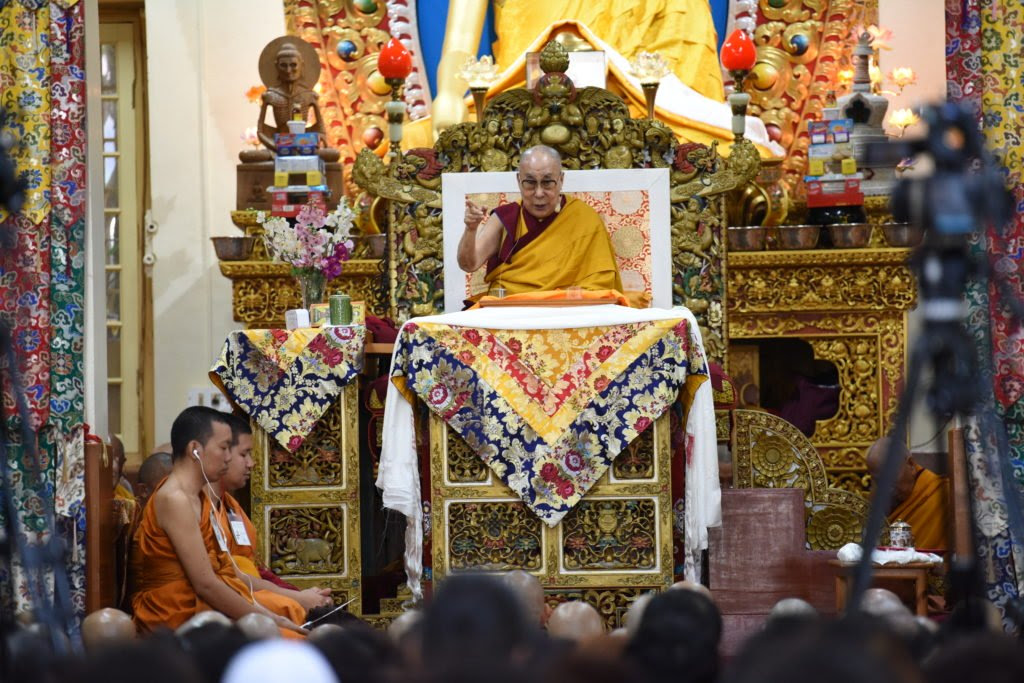 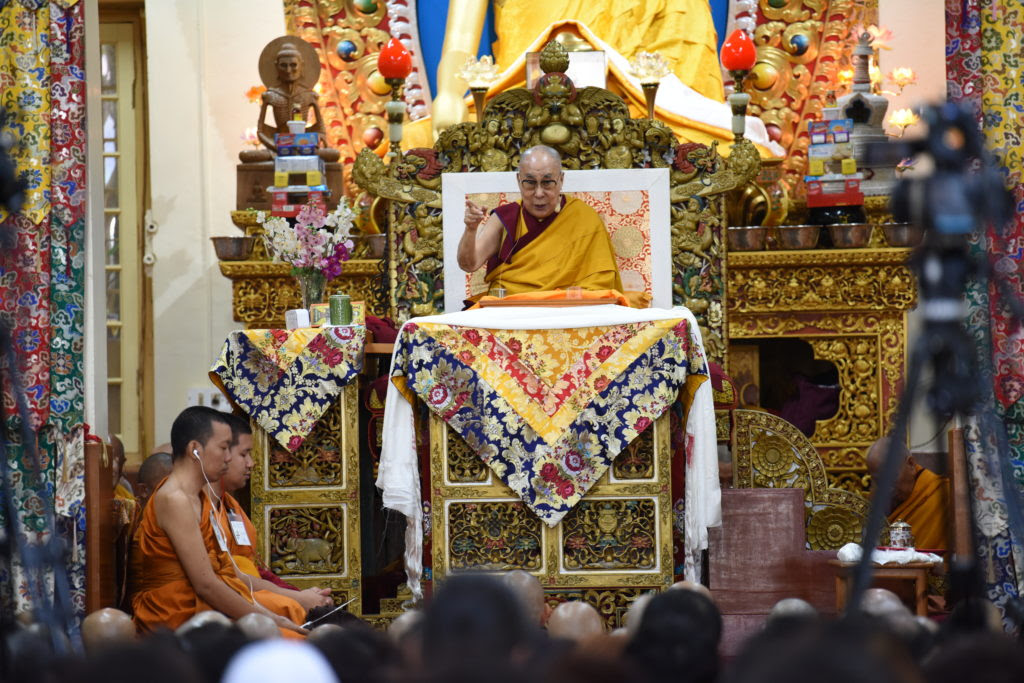 His Holiness the Dalai Lama giving teaching on ‘Heart Sutra’ at the request of Koreans on 4 November 2019 at the main temple, Dharamshala. Photo/Tenzin Jigme/CTA

More than 6000 people had gathered to listen to him, of whom more than 2000 had come from 60 countries around the world.

“You Koreans have come again to listen to teachings and I thought we could look at the ‘Heart Sutra’, which is both simple and difficult,” His Holiness began. “Today, since we have three days, I’ll give an introduction to the teachings and I’ll see if we can begin the ‘Heart Sutra’. Tomorrow, I’ll also explain the ‘Three Principal Aspects of the Path’, which is short and has been translated into Korean.

“Here in the 21st century we’ve made great material progress, so we might ask ourselves what is the benefit of religion today? There are some traditions whose message of love and compassion is based on their belief in a compassionate creator God. Since followers of such traditions believe that all beings are creations of such a god, making them brothers and sisters, you might ask how they could fight and kill each other?

“In India, there are traditions, like some of the Samkhya, Jains and Buddhists, who don’t assert a creator. Instead, they consider the pain and pleasure we experience to be a consequence of our own actions. Therefore, they teach that what happens to us is in our hands. Some recognise the existence of a self separate from our body and mind. They say that it is this self that goes on from life to life. Buddhists, however, declare that it is the continuity of subtle consciousness that goes on from life to life.

“We may experience pain and pleasure physically, but the feelings such episodes entail take place in the mind. Despite this, there are people who have little appreciation of the function of the mind. In ancient Indian tradition, mind was explained in detail. Although records of this are found in religious texts, such knowledge need not be restricted to the religious sphere. It can be examined in an academic, secular context.

“If you want to avoid suffering, you should seek out its causes and examine whether they can be eliminated. Similarly, once you recognise the causes of happiness you should cultivate them, much as we plant seeds in the earth and nurture them with water and manure until they bear fruit.

“The Buddha advised his followers not to accept what he taught blindly, but to examine and test it. He said if it is not corroborated by reason, don’t accept it, but look again. Because of Buddhism’s use of logic and its profound philosophical approach, Buddhist students can have constructive conversations with modern scientists. Many of them appreciate the Buddhist notion of dependent arising. Others are struck by Buddhist understanding of the workings of mind and the emotions.”

His Holiness discussed the mind’s different levels of subtlety. He observed that when we fall asleep and dream a subtler consciousness manifests that is not dominated by sensory experience. He noted that it is mental afflictions that disturb our peace of mind. Due to anger and attachment we bring suffering on ourselves and others. Since peace of mind entails an end to mental restlessness it is worth learning about different states of mind and discovering antidotes to mental afflictions like attachment and anger.

Despite technological advancement, we can only transform our minds by engaging with mind. This can be done in an entirely secular way. India’s precious traditions of non-violence and compassion— ‘ahimsa’ and ‘karuna’—remain relevant today. Compassion brings peace of mind. Anger and attachment bring fear and suspicion. It’s natural for us to respond with compassion because we are social animals.

“In teaching about selflessness, the Buddha demonstrated that nothing exists independently from its own side. When you hold yourself dear, it intensifies inappropriate thinking. We not only hold onto the way things appear, we hold onto the qualities of goodness or beauty in those objects. However, the Middle Way School declares that nothing exists independently, despite appearing to do so, and that things have no objective existence. This corresponds to the thought that underlies quantum physics’ appraisal of phenomena.

“When Nagarjuna writes in his ‘Fundamental Wisdom of the Middle Way’,

Through the elimination of karma and afflictive emotions there is liberation;
Karma and mental afflictions come from conceptual constructs;
These come about from mental fabrication;
Fabrication ceases through emptiness.

he means that ignorance is ended when you understand emptiness. If the profound knowledge of ancient India could be combined with modern education it could be very helpful. While the practice of altruism counters self-centredness, the idea that things don’t exist intrinsically as they appear to counters our misconception that thing inherently exist. Such a combination can bring about a powerful transformation.”

His Holiness took up the text of the ‘Heart Sutra’. He explained that the Buddha gave three rounds of teaching, referred to as turnings of the wheel of dharma. The Pali tradition is based on the first round and includes the three scriptural collections, as well as the strict observance of Vinaya—monastic discipline.

In his second round of teachings, at Rajgir, the Buddha explained the perfection of wisdom. Texts recording these teachings are extensive, medium and short in length. The shortest being the syllable ‘ah’, which is a term of negation. The ‘Heart Sutra’ is also known as the perfection of wisdom in 25 stanzas. There are several Indian commentaries to it in the Tengyur such as Jnanamitra’s ‘Essence of the Exalted Perfection of Wisdom’.

His Holiness clarified that the term ‘exalted’ here refers to the status of someone who has attained the path of seeing. He added that such attainment is achieved through learning, reflection and meditation. Such practice involves cultivating a calmly abiding mind and insight into reality—shamatha and vipashyana.

“The first round of the Buddha’s teachings laid the foundation. The second, the explanation of the perfection of wisdom, to which the Nalanda Tradition pays special attention, leads to making progress on the spiritual path. The third round revealed the subtlest consciousness, the mind of clear light.

“Soon after his enlightenment the Buddha is said to have expressed these thoughts—’Profound and peaceful, free from elaboration, uncompounded clear light, I have found a nectar-like Dharma. Yet if I were to teach it, there is no-one who would understand what I said; therefore, I shall remain silent here in the forest.’ We can understand this verse as anticipating the teachings he would eventually give. ‘Profound and peaceful’ refers to the first round of his teachings; ‘free from complexity’ refers to content of the second round, while ‘uncompounded luminosity’ refers to the third round.”

His Holiness explained the first lines of the ‘Heart Sutra’, ‘Thus have I heard at one time… the Blessed One had entered into meditative absorption on the varieties of phenomena called the appearance of the profound.’ The word appearance refers to conventional existence, while profound indicates ultimate existence. Although things are empty of intrinsic, independent existence, they still have a conventional appearance. This, His Holiness suggested, also alludes to dependent arising.

When the bodhisattva saw ‘that even the five aggregates are empty of intrinsic existence’, it revealed the selflessness not just of persons, but of phenomena too.

His Holiness told the congregation that Samdhong Rinpoché would conduct a review of the day’s instruction.

The teaching will resume tomorrow. 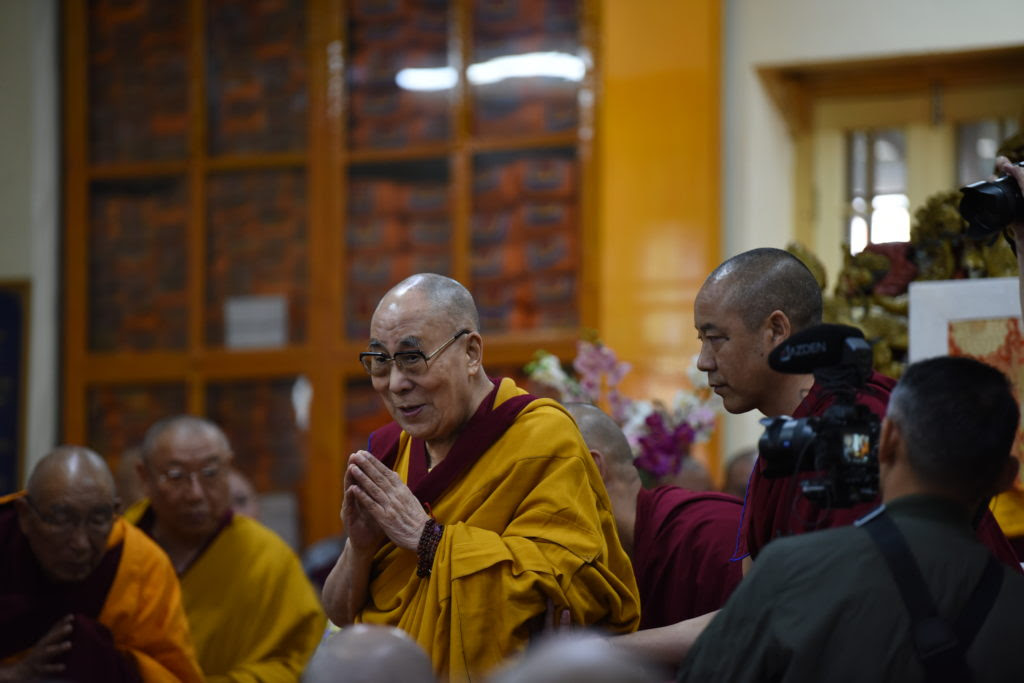 His Holiness the Dalai Lama greeting the audience as he arrives in the main temple on the first day of the teaching on 4 November 2019. Photo/Tenzin Jigme/CTA 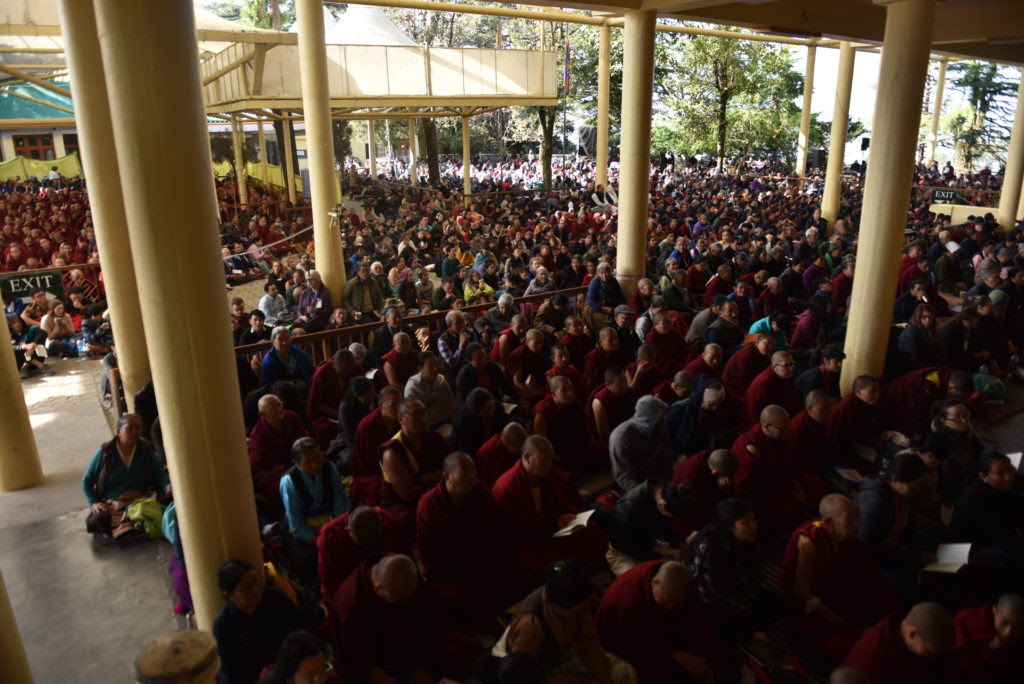 Large Number of audience gathered in the courtyard of the main temple to receive the teaching of His Holiness the Dalai Lama. Photo/Tenzin Jigme/CTA 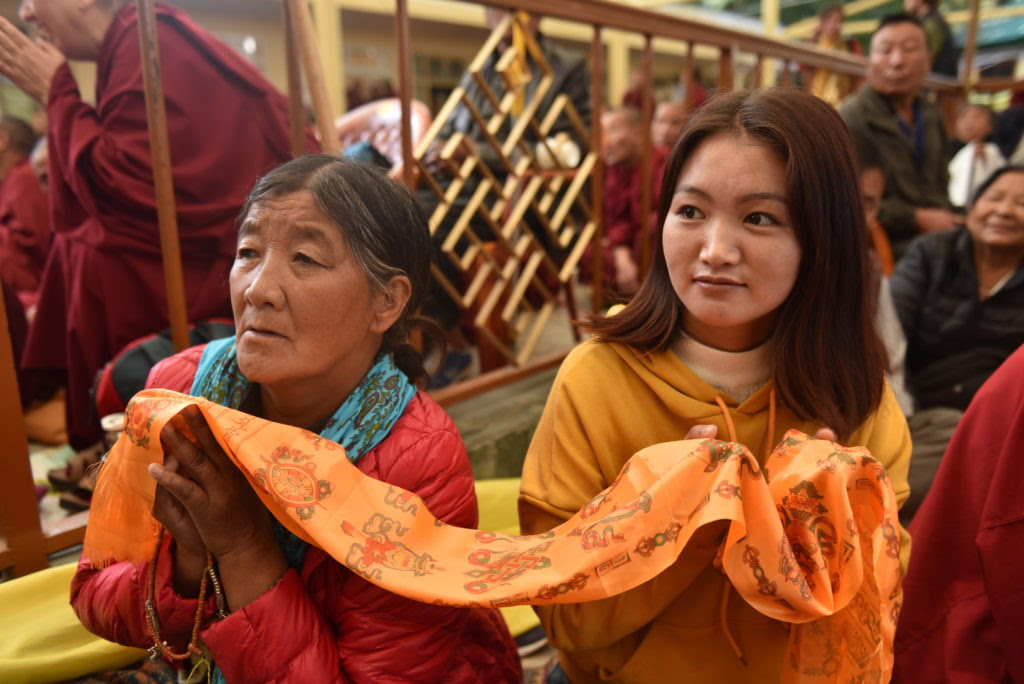 Members of audience awaiting for His Holiness the Dalai Lama’s arrival at the main temple. Photo/Tenzin Jigme/CTA 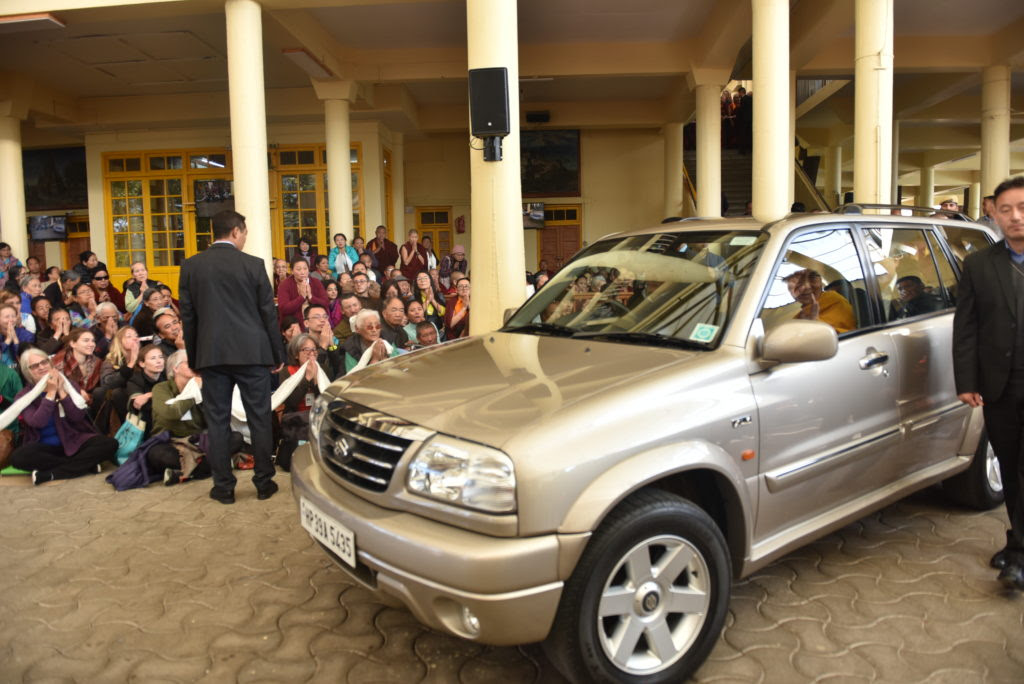 His Holiness the Dalai Lama departs from the teaching venue toward his residence. Photo/Tenzin Jigme/CTA