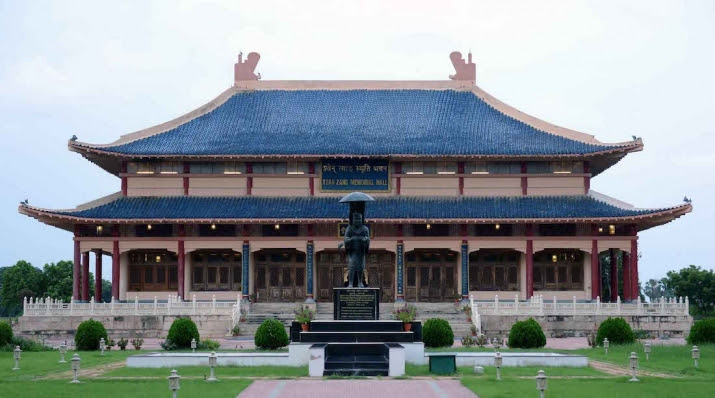 Nava Nalanda Mahavihara, a Nalanda-based deemed university* in the north Indian state of Bihar, observed the 1,352nd anniversary of the death of the renowned Chinese Buddhist monk and scholar Xuanzang on 19 March at the institution’s Xuanzang Memorial Hall. The event was attended by Master Ji Jing, a prominent Chinese monk, along with 250 disciples.

Xuanzang (c. 602–64) is one of the most illustrious figures in Buddhist history, noted for translating Buddhist scriptures from Sanskrit into Chinese and for making a 17-year overland journey from China to India, where he stayed for more than 13 years. His time in India included five years at the monastery and university of Nalanda, a great center of Buddhist learning, where he acquired knowledge of Sanskrit, Buddhist philosophy, and Indian thought.

According to Nava Nalanda Mahavihara director Dr. Ravindra Panth, the memorial hall was constructed for two purposes: to commemorate the visit of Xuanzang to ancient Nalanda and to establish an institute that would propagate the works of the Chinese scholar. The establishment of the hall was initiated in January 1957, funded by an endowment from the government of China, which also donated relics of Xuanzang and Chinese Buddhist texts. Panth added that the exploration and identification of historical Buddhist sites in India, including Nalanda, which Xuanzang recorded in his detailed travel journals, was initiated by explorers such as British army engineer Alexander Cunningham (1814–93), British barrister and author Alexander Broadley (1847–1916), and Hungarian-British archaeologist Aurel Stein (1862–1943).

Nava Nalanda Mahavihara released brochures titled “Revival of Ancient Buddhist Pilgrimage in Bihar,” based on information from Buddhist literature and the travel documents of Xuanzang, and organized an exhibition, The Pilgrimage Legacy of Xuanzang, to commemorate the occasion and to promote the theme of walking pilgrimages.

“The brochures highlight various thematic ‘Walking Pilgrimage trails,’ like ‘The Day of Exchange of Robes,’ a 10km [six-mile] trail connecting Silao and Rajgriha, based on the historic event of exchange of robes between Buddha and Mahakassapa,” said Deepak Anand, a senior researcher at Nava Nalanda Mahavihara. (The Times of India)

Another walk, dubbed “The Day of Design of Robes,” a 15-mile route connecting Rajagriha and Parwati, is based on the story of the Buddha Shakyamuni and his disciple Ananda, who, while walking on this route, discussed how the robes of monks should resemble the lattice pattern of the surrounding paddy fields. Two more pilgrimage trails, “Day of Enlightenment,” connecting Bakraur, Pragbodhi, and Bodh Gaya, and “Day of Delivering the Fire-Sermon,” which extends from Bodh Gaya to Brahmayoni, were being promoted in the Bodh Gaya area.

More than 2,000 people participated in the second such walk held on 13 December last year.  It would enable local communities to interact with Buddhist pilgrims.