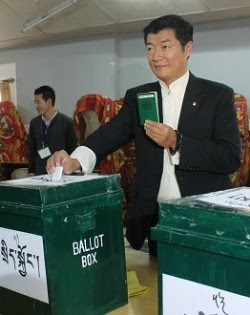 Prime Minister (Sikyong) and a candidate for the 2016 Sikyong elections Dr. Lobsang Sangay today said that the Middle Way policy and resumption of dialogue with China would be his main priority if he retains his office.

“Chinese President Xi Jinping in his 2nd term will relook at the Tibet issue. If you look at the past history, when Deng Xiaoping fully consolidated his position in the late 70s and early 80s, he initiated the dialogue. Under Jiang Zemin, he touched the Tibet issue late in his 2nd term and hence our envoys went to China. So hopefully Xi Jinping will take the initiative but the ground reality is repression still continue,” said the Harvard graduate who won 20,000 more votes than his opponent in the preliminary elections.

He also said that it is time the Chinese government learned from the democratic set up initiated by His Holiness here for over 50 years since its establishment. “It is possible for China to embrace democracy. Kindly see our good example of Democracy. If implemented, it will benefit both China and Tibet.”

On the importance of Tibet in Indo-China relationship, he said, “I am glad to see that in the 2016-17 period, there will be around 10 books on India China relations. In the past, whenever a book on the India China relations come out, Tibet hardly figured or gets a paragraph or two. But I recently received a book where there are two chapters on Tibet. I am sure that in those other books, a chapter or two or a major portion will be on Tibet,” said Sangay.

He added that all these show that Tibet is considered as an important issue by the academia and that the media also is recognizing Tibet as an important issue. With the recent receding Brahmaputra and the new railway line in Tibet, he said that Indian government sees Tibet as an issue, not just on human rights front but also from geopolitical, environmental and climate change point of view.

On his future plans, he said apart from the existing policies and programs, his government will allocate more funds in promoting entrepreneurship among Tibetans. He also said that he will boost up primary education which he called ‘long term investment’.