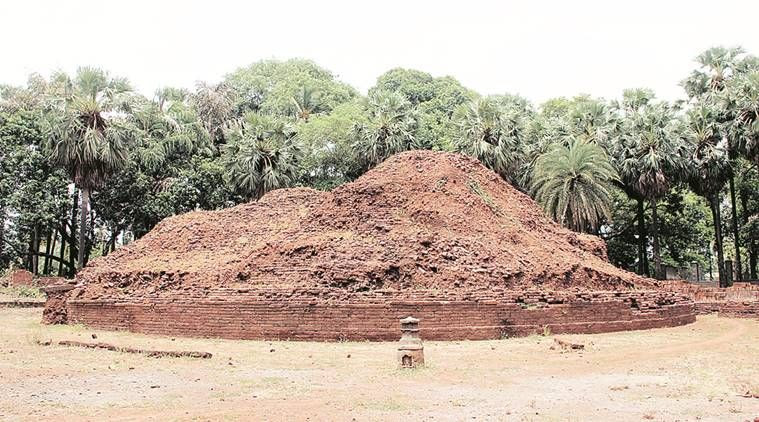 The nomenclature of this place probably was after the name of Boddhisat Suparaka, said to be the former birth of Gautama Buddha. But unfortunately, no signs lead you to the historical sight.

Legend has it that the stupa, supposedly constructed 2,500 years ago by a trader named Poorna, was inaugurated by Gautam Buddha himself.

In April 1882, Pandit Bhagwandas Indraji began excavations at this site. Along with the Stupa, he discovered a stone coffer, caskets, gold figures, seals and eight metal sculptures of Buddhist deities that are now preserved in the museum of Asiatic Society of Mumbai.

According to the local caretaker of the stupa, the mound is locally know as ‘Burud Rajacha Kot’ or the ‘Fort of the Basket-making King’.

The stupa, adorned with sandalwood carvings, is strikingly similar to the stupa in Sanchi, Madhya Pradesh. The mound, which is about 65 yards round the base, rises about 17 feet with steps from the eastern side.

Round the mound the foundation of a brick and stone wall can be clearly traced about 56 feet to the north and south and about 96 feet to the east-west of the mound.

The main entrance has an altar of sorts, with an ancient idol of Buddha placed in a stone compartment.

A relatively new statue of Buddha is also placed on the altar. Out of Ashoka’s 14 edicts, the 8th and 9th edict were found close to the stupa site, confirming speculations that Sopara was indeed a significant Buddhist site in the ancient times.

According to the board, when King Ashoka’s son Dharmendra and daughter Sanghamitra were travelling to Sri Lanka from Bodh Gaya carrying branches of the Bodhi tree, they had passed through Sopara.

A gateway adorned with Buddhist inscriptions and carvings stands tall at a road junction, close to the stupa site.

”Every evening, few locals come and sit on the benches bordering the stupa to enjoy a whiff of the evening air. In the past few years, the number of pilgrims have steadily been increasing but infrastructure remains the same,” one of the locals living in a hut close to the stupa said.