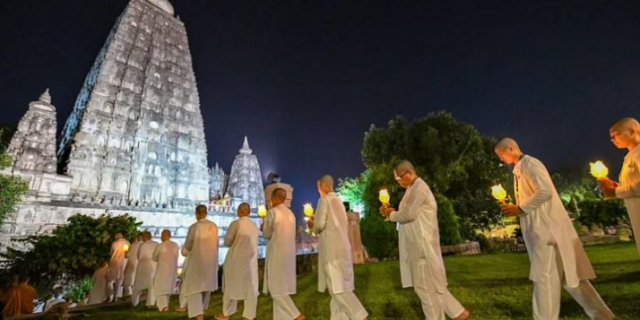 From newindianexpress.com
The Mahabodhi Temple or the Mahabodhi Mahavihar, a UNESCO World Heritage Site, is an ancient, but much rebuilt and restored, Buddhist temple in Bodh Gaya, marking the location where the Buddha is said to have attained enlightenment.

Mahabodhi Temple, one of the holiest sites of Buddhism, marking the spot of the Buddha’s Enlightenment (Bodhi). It is located in Bodh Gaya (in central Bihar state, northeastern India) on the banks of the Niranjana River.

The Mahabodhi Temple is one of the oldest brick temples in India. The original structure, later replaced, was built by the Mauryan emperor Ashoka (died c. 238 BCE), one of Buddhism’s most important proselytes, to commemorate the Buddha’s Enlightenment. The temple is 55 metres (180 feet) in height. Its pyramidal shikhara (tower) comprises several layers of niches, arch motifs, and fine engravings. Four towers, each identical to its central counterpart but smaller in size and topped with an umbrella-like dome, adorn the corners of the two-story structure. A shrine inside the temple holds a yellow sandstone statue of the Buddha encased in glass.

A descendant of the Bodhi tree under which the Buddha is said to have sat until he attained enlightenment stands adjacent to the temple. Ashoka’s stone slab purporting to mark the exact position where the Buddha sat is traditionally called the Buddha’s vajrasana (literally “diamond throne” or “thunder seat”). Stone railings surround the temple as well as the Bodhi tree. One of the most famous of Ashoka’s many pillars (on which he had engraved his edicts and his understanding of religious doctrine) stands at the southeast corner of the temple.

The Mahabodhi Temple in Bodh Gaya, India, one of the most sacred of all Buddhist sites in the world, reopened to the public on 27 August after being closed for five months when a deadly second wave of COVID-19 infections began sweeping across the country.

“We had to, unfortunately, keep the [Mahabodhi] temple closed since around last April for everyone’s safety,” Bodhgaya Temple Management Committee secretary, Nangzey Dorjee told local media. “The good thing is that from today [27 August] the temple has been reopened at normal timings from 5am to 9pm . . . so we did proper preparations and it was reopened.” (WION)

The Mahabodhi Temple was closed to the public on 10 April to curb the rapid spread of the novel coronavirus. A subsequent state-wide lockdown was imposed in Bihar on 5 May after a local surge in COVID-19 infections was recorded. According to the Bodhgaya Temple Management Committee, a total of 3,400 devotees and tourists visited the temple on the first day of its reopening.

“It feels really good that today we came here for the first time, on the first day as [the Mahabodhi Temple] reopened. We came here to visit and it feels really good,” a local resident of Bodh Gaya named Anurag was quoted as saying. “The temple was closed for many days so the devotees and the tourists who wanted to come could not come. It is good that it reopened now so people will come here to visit and the local who make their livelihood from here can earn well.” (WION)

“The state government has given permission to reopen the shrine with strict instructions to follow the standard operating procedure [for the pandemic],” Dorjee explained. “The shrine campus is being sanitized thrice [daily]—in the morning, afternoon, and evening. Masks are mandatory for everyone to enter the campus. Physical distancing is being maintained. We have kept sanitizer at the entry point for everyone. Everyone visiting the shrine has to undergo thermal screening.” (The Times of India)

Only 10 people at a time are currently permitted to enter the  temple’s inner sanctum and all visitors to the temple complex are required to wear masks. No religious functions or ceremonies can be organized without permission of the district magistrate.