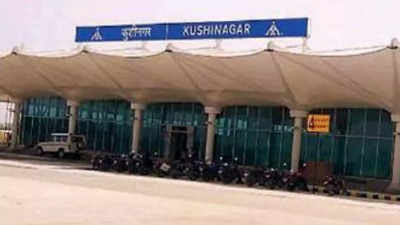 Airline plans to operate a flight between Kushinagar and Bhairahawa in Lumbini province of Nepal
By  —  Shyamal Sinha
The Ministry of Civil Aviation launched the ‘Regional Connectivity Scheme (RCS) UDAN—- Ude Desh Ka Aam Naagrik’ on 21 October 2016 with the twin objectives of1 : i. Promoting Balanced Regional Growth; and ii. Making Flying Affordable For Masses The scheme is a major step towards making flying a reality for the small town common man. With the launch of UDAN, the Aviation Sector is set to get a big boost and tap huge market of middle class flyers living in Tier-2 and Tier-3 cities2 .
Six months after it got the nod from Directorate General of Civil Aviation (DGCA) to operate international flights, the newly constructed Kushinagar airport has received the first proposal from Nepal-based Buddha Airlines to connect the east UP district with Kathmandu via Lucknow.
Lumbini, Bodhgaya, Sarnath and Kushinagar are the primary pilgrimage places of Buddhist Circuits associated with the life and teachings of the Lord Buddha.

The airline submitted a proposal to Kushinagar airport authorities, which referred it to DGCA for clearance. Deputy general manager, AAI, Kushinagar airport, Sanjay Kumar Narain, confirmed the carrier has submitted a proposal to operate flights to and from Kushinagar.
“The authority has asked the company to get DGCA nod. Flight operations are currently suspended till September 30 and the airline will be allowed to operate after due approval,” Narain told TOI. Sources said, the airline also plans to operate a flight between Kushinagar and Bhairahawa in Lumbini province of Nepal.
Kushinagar Airport likely to be inaugurated before UP polls

Air connectivity with Nepal is expected to boost the Buddhist circuit, which the UP government seeks to push on the global map. Tourists and pilgrims from Buddhist nations touch down at Kathmandu airport and then come to Kushinagar by road. Now, tourists will be comfortable with a direct flight from Bhairahawa and Kathmandu to Kushinagar.
Buddha Airlines had experimented with the idea of operating flights from Kathmandu to Lucknow and Varanasi around 10 years ago. The move, however, fell flat in the wake of less footfall. The airline, eventually, had to suspend its operations to India.
The Kushinagar International Airport is likely to be inaugurated months before UP assembly elections. Sources said, AAI has been seeking feedback before making the airport functional. The Kushinagar airport was handed over operations to AAI in October, 2019, and a regional connectivity scheme (RCS) terminal was completed a year later.

Airports Authority of India (AAI) has given Rs 200 crore for Regional Connectivity Scheme in the current fiscal, and is likely to contribute Rs 500 crore in the next fiscal.  The second round of RCS will need Viability Gap Funding of Rs 620 crore, while the first round required Rs 213 crore10 .  The commitments of the States are to make sufficient land available, ensure adequate security, and provide essential services at concessional rates for the airports or air strips.
Share this...