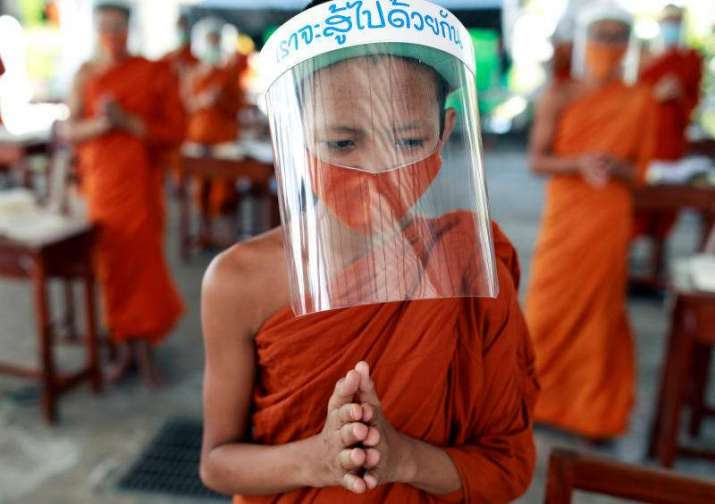 Novice monks wear face shields and protective masks during a lesson at the Wat Molilokkayaram monastic educational institute in Bangkok. From bangkokpost.com
Coronavirus disease (COVID-19) is an infectious disease caused by a newly discovered coronavirus.
Most people who fall sick with COVID-19 will experience mild to moderate symptoms and recover without special treatment.

Although schools in Thailand have been closed while the kingdom works to contain the COVID-19 outbreak, novice monks continue to attend their monastic school for Pali classes at Molilokkayaram Educational Institute (MEI), based at Wat Molilokkayaram, a royal Buddhist monastery in Bangkok.

Reuters news agency reported on 22 April that some 60 novice monks were attending Pali classes, while wearing protective masks and face shields and maintaining social-distancing practices. Speaking about the class, the abbot of Wat Molilokkayaram, Venerable Phra Theppariyattimolee, explained that there was no reason to stop the students’ studies of the ancient scriptural language due to the virus. He noted that the school had set up desks for novices no less than two meters apart to prevent any spread of the virus.

“We check the temperatures of all monks and novices every morning,” said Ven. Theppariyattimolee. “Monks and novices are required to wear face masks when they have activities outside their living quarters. . . . This is to protect all involved.” (Reuters)

“[I] really cannot see why this unnecessary group gathering could not have been postponed until this virus problem is over,” commented “Bilko,” a reader of the Bangkok Post newspaper. “This whole scenario flies in the face of sensibility and does tend to show just how unacceptable potentially dangerous practices are forced through under the name of religion.” (Bangkok Post)

Ven. Theppariyattimolee observed that although religious classes were ongoing, the monastery remained closed to the traditional daily practice of monks receiving alms of food from the public. Instead, food is cooked and distributed inside the temple.

At the time of writing on 28 April, the Thai government had reported a total of 2,938 confirmed cases and 54 deaths from COVID-19, with 2,652 recovered. Globally, the disease has infected more than 3 million people and killed more than 211,170 since first being reported in China.* Novice monks attend a lesson at Wat Molilokayaram. From reuters.com

During early Rattanakosin kingdom (1782–1932), Wat Molilokkayaram served as an elementary school for the many princes of King Rama II (r. 1809–24). It also provided Pali language courses with oral examinations. Wat Molilokkayaram was fully converted into a monastic educational institute in 1991, with the aim of producing highly skilled Buddhist monastics with an in-depth knowledge of both the Pali language and Buddhist religious scriptures.

There are two main schools of Buddhism, the Theravada and the Mahayana. Theravada Buddhism. The word Theravada in the Pali language means the way or vehicle (vada) of the elders (thera). It is the only surviving school of pre-Mahayana, or old Buddhism. Theravada is sometimes called southern Buddhism, because it was traditionally found in southern Asian countries such as Sri Lanka, Thailand, and Burma.

It is also known as Pali Buddhism, because its scriptures, or holy writings, are in the Pali language. These sacred writing are called the Pali Canon or Tripitaka. Tri means three and pitaka means baskets. There are three parts to the scriptures. The scriptures were written sometime between 100 B.C. and 1 B.C. They were written on palm leaves and stored in baskets.