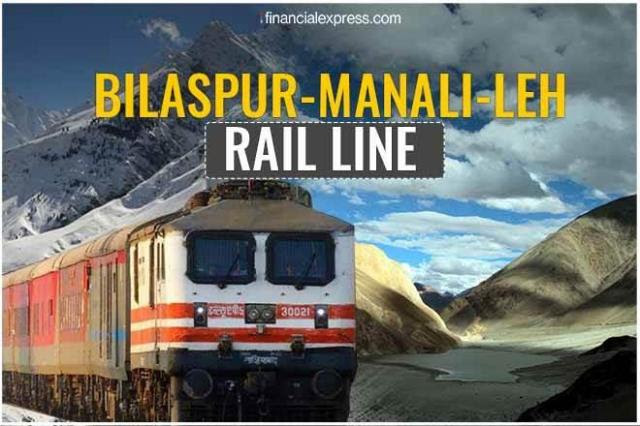 Manali–Leh line is a proposed high-elevation all-weather 1,676 mm (5 ft 6 in) broad gauge railway track that is planned to connect Bilaspur in Himachal Pradesh to Leh in Ladakh region of Jammu and Kashmir state of India. It would link to the Indian railway network via an extension of the Kangra Valley Railway to Mandi, which would be converted to 1,676 mm (5 ft 6 in) broad gauge.

The total expected length of Bilaspur(Himachal Pradesh) –Manali–Leh line is 498 km (309 miles). It would become the highest railway track in the world, overtaking the current record of the Qinghai–Tibet Railway.

The Ladakh region usually remains cut-off from the rest of the country for nearly six months every year due to the closure of the 434-km long Srinagar-Leh national highway during winters. However, the work on the detailed project report (DPR) for the all-weather railway line between Himachal Pradesh to Leh has started. Once the project is completed, it will provide an all-weather surface connectivity to the far flung areas of Ladakh. Here s all you need to know about the upcoming Bilaspur-Manali-Leh railway line and some of its unique features:

1. The Bilaspur-Manali-Leh railway line project is set to be at the highest point of 5,360 metres above the mean sea level. This Indian Railways project is comparable only to the Qinghai-Tibet rail line of China. The 51-km long stretch from Upshi in Himachal Pradesh and Phe in the Leh district will be seamlessly connected with this line.

2. This railway project is of strategic significance as it will lie along the Indo-China border and will not just help the armed forces of the country, but will also boost tourism and overall development of the region. The Ministry of Defence (MOD) has worked on the final location survey (FLS).

3. Presently the railway connectivity in Leh is not easy. Bhanupalli is the nearest rail head, which itself is about 730 km from Leh. Hence, the region requires commuter services to offer smooth travel with other neighbouring regions.

4. On the completion of this railway line, the areas between Bilaspur and Leh such as Manali, Upshi,Mandi, Sundernagar, Koksar, Keylong, Karu, Darcha as well as other important towns of Himachal Pradesh and Jammu and Kashmir will get seamless railway connectivity. 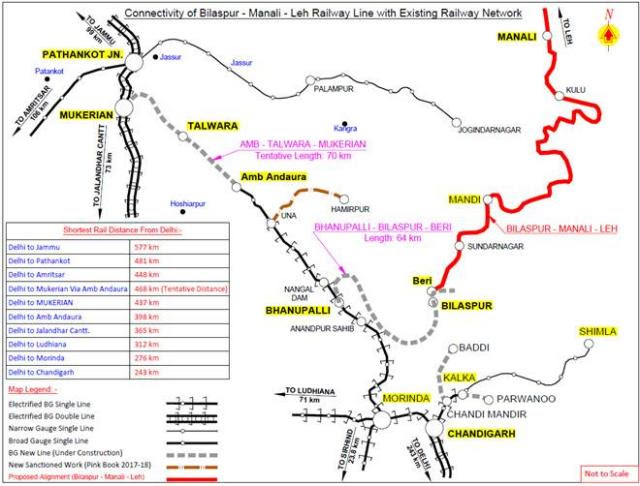 6. This railway line also holds socio-cultural significance as it will boost the tourist inflow and lead to a rise of economic activities in Ladakh. It will also be beneficial for the livelihood of the local population.

7. The Bilaspur-Manali-Leh railway line has been proposed as a single track railway line and the track is expected to have major tunnels, bridges and viaducts. A total of 30 stations will be covered across this entire line.

8. It is said to be the most difficult railway project in the country and much larger than the Udhampur-Srinagar-Baramula railway line.

9. The route of this rail line passes through difficult, treacherous, inaccessible as well as rugged area. It traverse through areas with challenging geology, geography and low oxygen levels due to high altitudes.

10. The train coaches for this particular railway line will be specially built for the higher altitude and oxygen masks are likely to be present for every passenger, given that the cabin pressure in the coaches will have to be maintained at such altitudes.

Taglang La railway station at Taglang La is expected to become the highest railway station in the world at 5,359 m (17,582 ft) above the sea level overtaking the current record of Tanggula Railway Station in Qinghai, China at 5,086 m (16,686 ft).