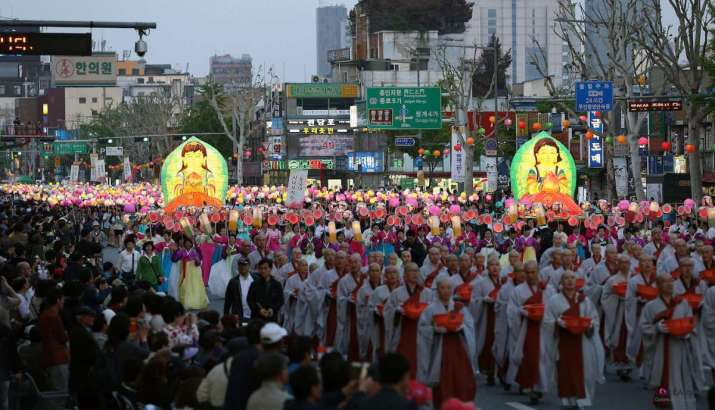 The annual Lotus Lantern Festival is one of the biggest cultural events in the Korean calendar. From wikipedia.org
Established over 1,300 years ago, this annual Buddhist lantern festival brightens the hearts and skies of both Korea and the world  .
Every year, on the weekend before Buddha’s birthday, a phenomenal celebration takes place in South Korea—the Lotus Lantern Festival. All the celebrations last for about a week, but the pre-birthday weekend is the most exciting. Buddha’s Birthday falls on the 8th day of the 4th month of the Lunar calendar. People from all over the world gather together in Seoul for this event and the normally bustling city streets watch the activities at a standstill.

Korea’s Buddhist community on Tuesday announced that the famed annual Lotus Lantern Festival in Seoul, which usually coincides with religious observations marking the birth of the Buddha and was due to be held this weekend, has been canceled as a precautionary measure following a recent cluster of COVID-19 infections in the Korean capital.

The Association of Korean Buddhist Orders, whose members include the Jogye Order of Korean Buddhism, South Korea’s largest Buddhist order, stated during a press conference on 19 May that the popular Buddhist festival would be canceled as a precautionary measure in light of a recent spike in local COVID-19 transmissions. The lantern festival had already been postponed from the end of April due to the pandemic, and was scheduled to begin on 23 May.

The Lotus Lantern Festival (Kor.: Yeon Deung Hoe [연등회]) has a history that stretches back more than 1,200 years to Korea’s ancient Silla (신라) period (c.57 BCE–935 CE) and has been designated by the Korean government as one of the nation’s Intangible Cultural Properties. Described as the largest festival of its kind in the world, visitors to the annual event have been recorded as exceeding 350,000 (including local residents and foreign tourists).

Among a variety cultural events, displays, and performances at Buddhist temples and public venues, the festival includes a famous parade of more than 100,000 lanterns that travels a three-kilometer route through the streets of downtown Seoul. Such is its popularity, that it has become as much a social and cultural event as a religious celebration.

Commemorations for the birthday of Buddha, a public holiday in South Korea, are known as Bucheonim Osin Nal (부처님 오신 날) meaning “the day the Buddha came,” and Seokga Tansinil (석가탄신일) or “the Buddha’s birthday.” The festival is observed on the eighth day of the fourth month of the lunar calendar, which usually falls during May, but this year fell on 30 April. Public events for the Buddhist holiday have been postponed by one month to 30 May, amid strict social distancing guidelines. The lantern festival has been canceled only three times in modern Korean history, including once in 1961, when martial law was proclaimed in Seoul during the April Revolution, and in 1980, during the Seoul Spring pro-democracy movement.

“No one can predict whether new cluster infections will happen again, regarding the recent nightclub-linked cases,” said the Association of Korean Buddhist Orders. “We made the decision after careful consideration and hope that all people will go back to a peaceful life when the pandemic comes to an end as soon as possible.” (Yonhap News Agency)

South Korea recently experienced an unexpected surge in COVID-19 cases in which at least 170 people tested positive for the coronavirus after coming into close contact with nightclubbers in Seoul’s Itaewon, a district known for its multicultural nightlife. From llf.or.kr
Imagine a hundred thousand participants, each with glowing lanterns which represent a commitment to the Buddhist enlightenment teachings. A friendly tip: Tapgol Park has an excellent vantage point to watch the festivities. After the parade, there is dancing followed by thousands of wish lanterns being released into the sky. The festival ends with a parade towards the front of Jogyesa Temple.
Share this...