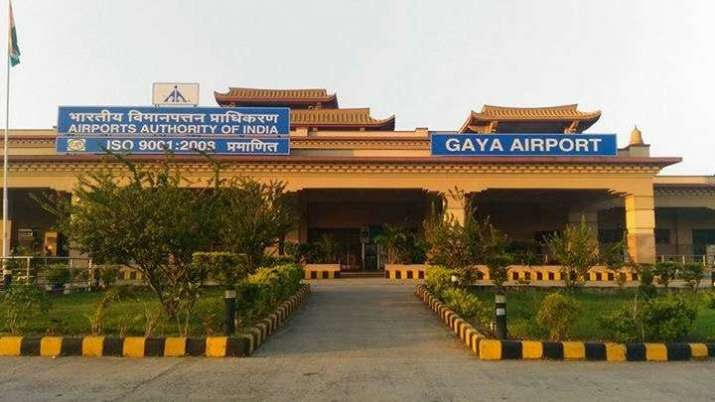 Gaya Airport, also known locally as Bodh Gaya Airport. From wikipedia.org
Bodh Gaya is one of the most sacred places in Buddhist tradition. Bodh Gaya is a religious site of pilgrimage which is associated with Mahabodhi temple and is located in Indian state of Bihar. Mahabodhi Temple, also known as Great Awakening Temple, is one of the sacred sites which is listed on UNESCO World Heritage Site due to its historical importance related with Gautama Buddha Enligtenment.

Buddhists in Bodh Gaya, India, have voiced worries about providing temporary accomodation for Indians who are being flown in from areas of the world hit by the coronavirus pandemic. The International Buddhist Council, the body representing more than 50 Buddhist monasteries in Bodh Gaya and the surrounding area, has issued a statement requesting that proposed quarantine sites—which include temples and monasteries—not be used and that Indians returning from abroad be housed elsewhere.

In a letter to Nitish Kumar, the chief minister of Bihar—the Indian state in which Bodh Gaya is located—the general secretary of the International Buddhist Council, Bhikkhu Pragyadeep, cited possible health hazards for Bodh Gaya locals as well as disruptions to tourists and pilgrims due to the presence of the repatriated Indians.

Pragyadeep also stressed that temple and monastery managers were not equipped to handle possible COVID-19 cases, nor to maintain strict levels of public health conditions. He wrote: “The purity and sanctity of the monasteries will be contaminated if it is made a quarantine center.” (Times of India)

Some 54 hotels, 54 guest houses, and 56 monasteries are to be used as quarantine centers for returnees. During this process, an estimated 8,000 individuals from Bodh Gaya and the surrounding area, along with tourists and other visitors, will be evacuated under the “Vande Bharat Mission” by the Indian government, which is seeking to repatriate Indians from around the world who have been stranded due to travel disruptions caused by the pandemic. Some 4,170 rooms have been set aside specifically to house the returnees during their mandatory 14-day quarantine period. A golden Buddha statue inside Bodh Gaya Airport. From tripadvisor.com

In addition to requesting that returning Indians be sent for home quarantine, Ven. Pragyadeep offered the stern warning that: “If our humble requests are not heard, all the international monks will come out for a peace protest in front of Mahabodhi Temple.” (The Times of India)

The first group of some 41 Indians, who had been stranded in United Kingdom, arrived on Monday evening. The planned return of Indians abroad will be staggered over several weeks to allow time for logistical concerns and to ensure space for those returning. “There is no paucity of rooms as the returnees would not be coming in one go,” said the area district magistrate, Abhishek Singh. (The Times of India)

The returnees who are from Bihar were sent to quarantine facilities in Bodh Gaya, while several who were from neighboring Jharkhand were taken to Jharkhand’s capital, Ranchi. Further flights are scheduled to arrive at Bodh Gaya Airport on 24, 25, and 26 May, and 1, and 3 June, bringing Indians from a number of countries, including Kazakhstan, Oman, Qatar, and Russia.

Bodh Gaya is an international tourist and pilgrimage destination for Buddhists from around the world. The city itself is very poor and is surrounded by a rural populous with limited sanitation and healthcare facilities. The communal nature of the temples and monasteries makes self-quarantining difficult, raising further worries for resident monastics in the city, many of whom are of advanced age.

The city ebbs and flows with devotees throughout the year, yet it remains suspended in time, as monks in saffron and maroon robes walk around the monuments and temples, their chants and prayers enveloping the surroundings in a cocoon of peace. Even the air of this small town seems to be permeated with peace and serenity,