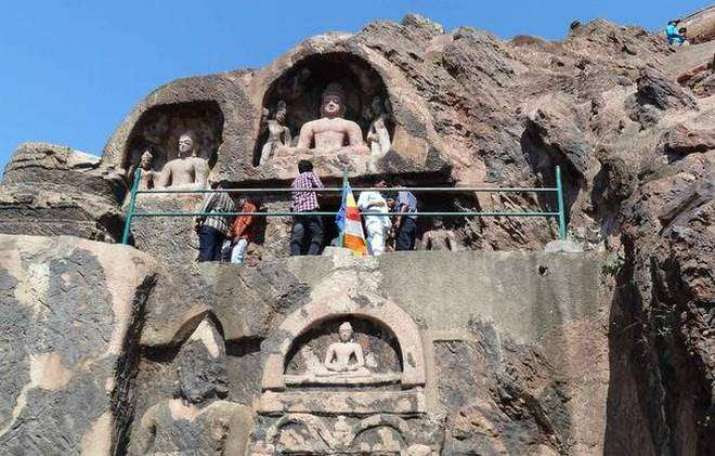 A view of Bojjannakonda, a Buddhist monastery dating to the third century BCE in Visakhapatnam District. From the hindu.co
Makar Sankranti is celebrated across the country in different ways and the cultural significance of the festival varies geographically as we move from one state to another, with every state celebrating and welcoming the new season of harvest in their own indigenous manner.

The festival, Sankranti (మకర సంక్రాంతి), is celebrated for four days in Andhra Pradesh and Telangana:

On the third day, Kanuma (కనుమ) is celebrated. Kanuma is very intimate to the hearts of farmers because it is the day for praying and showcasing their cattle with honor. Cattle are the symbolic indication of prosperity. On the day after Makara Sankranti, the animal kingdom is remembered and, in particular, cows. Girls feed the animals, birds, and fish as a symbol of sharing. Mukkanuma (ముక్కనుమ)

The fourth day is called Mukkanuma (ముక్కనుమ) which is popular among the non-vegetarians of the society. On this day, farmers offer prayers to the elements (like soil, rain, fire for helping the harvest) and the (village) goddesses with their gifts which sometimes (and these days mainly) include animals. People in Andhra and Telangana do not eat any meat (or fish) during the first three days of the festival and do so only on the day of Mukkanuma. Kanuma, Mukkanuma and the day following Mukkanuma call for celebrations with the union of families, friends, relatives. People play with kites and the sky is filled with beautiful kites.

On 16 January, during the observation of Kanuma Day, which is celebrated as part of the Makar Sankranti festival in the southeastern Indian state of Andhra Pradesh, representatives of the Indian Trust for Art and Cultural Heritage (INTACH) requested the local authorities to provide protection against vandalism for the Buddhist archaeological sites of Bojjannakonda and Lingalakonda, which date to the third century BCE.

According to The Hindu newspaper, the villagers practice an annual traditional “stone pelting” ritual on Kanuma Day, typically attended by hundreds of worshippers who visit the site to throw stones at at a “belly-shaped object” at Bojjannakonda, believed by many to be part of a demon. The ritual has begun to cause damage to ancient Buddhist caves and the natural features of the site. INTACH, a nationwide body dedicated to heritage awareness and conservation in India, has made a sustained campaign to stop the stone-pelting ritual.

“Every year, a jatara [village festival] is held wherein thousands of people descend on these two Buddhist sites on Kanuma, most of them in high spirits,” said INTACH’s Visakhapatnam chapter convener Mayank Kumari Deo. “They pull out the bricks and throw them into the caves as well as throw stones onto the stupas. The people also litter these sites with liquor bottles and vast amounts of trash. The stupas have been damaged in the past due to a superstitious ritual of the Vajrayana period that has no relevance anymore.” (The Times of India)

In a letter to district collector V. Vinay Chand, INTACH stated: “Vandalism, or defacing of any order like removing bricks and throwing stones at the heritage site is highly condemnable. We want the administration to provide enough security on the Kanuma day to prevent damage to the archaeologically significant site.” (The Hindu)

Bojjannakonda and Lingalakonda are Buddhist monasteries on adjacent hillocks in Sankaram, in Vishakhapatnam of Andhra Pradesh. Both heritage sites are composed of many monolithic stupas, rock-cut caves, ruins of prayer halls, meditation halls, brick-built structural edifices, and resting places. Many Buddha statues are also carved into the rock faces of the caves. Rock-cut stupas at Bojjannakonda. From ancient-origins.net

“Bojjannakonda and Lingalametta are the twin Buddhist monasteries dating back to the third century BCE,” said Deo. “These sites have seen three forms of Buddhism—the Theravada period when Lord Buddha was considered a teacher, the Mahayana, where Buddhism was more devotional, and Vajrayana, where [the] Buddhist tradition was more practiced as Tantra and esoteric form.” (The Hindu)

Andhra Pradesh is home to numerous Buddhist sites belonging to the Theravada, Mahayana, and Vajrayana Buddhist traditions, which have flourished since the early fifth century BCE. Although Buddhism declined during the latter part of the first millennium, a number of Buddhist sites—including Bojjannakonda and Lingalametta in Visakhapatnam—have become popular tourist destinations.

“These sites, which have been documented in the world heritage encyclopedia, are of vital importance to Visakhapatnam as heritage and tourist attractions. We therefore request the police to provide protection. In the past, district collectors have responded by sending a strong police force to protect the site and this year too we request that these sites be protected,” Deo emphasized. (The Times of India)