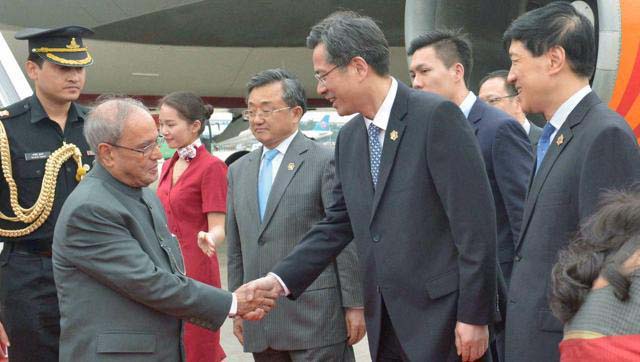 Focusing on ancient Buddhist links is a customary part of India-China cultural diplomacy during high-level visits even if bilateral ties have generally been less-than sacred in modern times.

Indian President Pranab Mukherjee will carry forward that tradition when he will visit the Hualin temple in Guangzhou, the capital of Guangdong province on Wednesday afternoon.

Legends claim that a Buddhist monk from India came to the region in the 6th century and spread the ideas and philosophy of Buddhism.

The monk, Bodhidharma, is also said to be responsible for starting the physical training of the Shaolin monastery monks, leading to the creation of the martial art, Kung Fu.

It is said the temple had a pagoda named after King Ashoka. But it was destroyed during the Cultural Revolution decade of 1966-76. But the repeatedly rebuilt temple remains an example of religious links between the two countries.

To reinforce the link, Mukherjee will officially install a made-in-India bronze statue of Buddha, weighing some 40 kg and four feet in length in the temple.