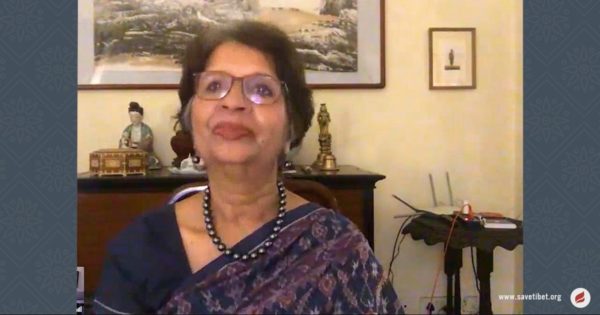 By International Campaign for Tibet

China’s conquest of Tibet caused long-term difficulties for India, but the Indian government can still push for dialogue between Chinese and Tibetan leaders on Tibet’s future, a former high-ranking Indian diplomat says in a new video interview.

“I think that India can do a little more in being an advocate for negotiations and for discussions and for conversations between the Tibetan community in exile and the Chinese,” Nirupama Rao, India’s former ambassador to China (2006-09), foreign secretary (2009-11) and ambassador to the United States (2011-13), says on an episode of the International Campaign for Tibet’s Tibet Talks series that premiered May 26, 2022.

“I think India and the United States, it’s something that we perhaps should look at, not only exchanging ideas but also looking at policy options that we have to ensure the best outcomes for the Tibetan people in these circumstances,” Rao adds.

Rao appeared on Tibet Talks to discuss her book, “The Fractured Himalaya: India, Tibet, China 1949-62,” which untangles the complex early years of the India-China relationship, with the still-unresolved issue of Tibet closely woven in.

“I can say from experience that it is a richly detailed and extremely readable account of a seminal period in relations between China and India, and it also provides a look at the centrality of Tibet and China’s invasion of Tibet to relations between the two countries at the time and since,” International Campaign for Tibet Board Member and Asia expert Ellen Bork, who interviews Rao on the Tibet Talk, says of the book.

“In light of the continuing and escalating tensions along [India and China’s] 2,100-mile border, this book is especially relevant now as the 60th anniversary of the 1962 Sino-Indian War approaches this fall.”

In her conversation with Bork, Rao explains the title of the book.

“The Himalayas are literally what the poet Muhammad Iqbal said before independence. He called it the ‘dīwār-i-Hindustān,’ that is the wall of Hindustan, the wall of India,” Rao recounts. “It was seen as the mountains from which we literally drew our strength and our protection and our sustenance. And once the Chinese entered Tibet in 1950, 1951, in a sense, the Himalaya was fractured.

“One of our diplomats in Lhasa [Tibet’s capital] at that time said, ‘The Chinese have entered Tibet. The Himalayas no longer exist.’” Nirupama Rao, India’s former ambassador to China, foreign secretary and ambassador to the United States, appears on an episode of the International Campaign for Tibet’s Tibet Talks series that premiered May 26, 2022.

With China seizing control of Tibet, India lost the security and the recognition of the borders it once had with Tibet.

“The whole issue, the whole problem of the borders we shared with Tibet essentially became an India-China problem, because we had to deal with China, and China questioned those borders a few years after it was able to consolidate its presence in Tibet,” Rao says.

“I believe our policymakers at that time in our history perhaps didn’t have—and I guess it’s easy for us to say that with the hindsight that we have today—but they weren’t able to look far ahead into the future and anticipate that the whole question of Tibet’s status and the rights and privileges that India under the British had enjoyed in Tibet were being literally given away to the Chinese.”

Border disputes in the Himalayas led to the Sino-Indian War of 1962—which China won—at the end of the period that Rao’s book covers.

Border tension between the two countries has remained high since a deadly clash between Chinese and Indian troops in the Galwan Valley in 2020.

Rao says on the Tibet Talk that Indians feel an “enormous emotional attachment” to Tibet.

India has provided a home for the Dalai Lama since the Chinese government forced him into exile in 1959.

India is also the headquarters of the Central Tibetan Administration, which provides democratic governance for Tibetans living outside China’s occupation of their country.

“We’ve always regarded Tibet as that sacred geography that is in so many ways connected to India,” Rao says. “A place of pilgrimage, a place of religious and spiritual inspiration for many of us who go to the Himalayas and who cross over into places in Tibet, which are sacred to our faith.”

Although China has refused to negotiate with Tibetan leaders on a settlement on Tibet’s future since 2010, Rao believes the Indian government can advocate for dialogue to resume.

“It’s another matter that the Chinese establishment has been so impervious to any moves made on this subject,” she says. “They see it as a sovereignty issue, they see Tibet as an internal matter of China, they refuse to accommodate any ideas that come from outside that speak of reconciliation, that speak of building more common ground between the Tibetan community in exile and the Chinese.

“Unless you have that kind of building of common ground, how are you going to solve this whole issue of the succession of the Dalai Lama and what happens in Tibet in the decades to come?”