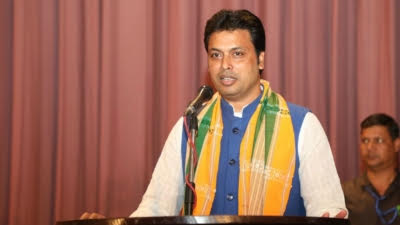 IBC Working towards the inclusion of Buddhist values and principles in the global social and political discourse  .Working with national, state, local governments, global and multilateral bodies and organizations on issues of shared concern.

Dr.Dhammpiya secretary general IBC, gave  proposal for setting up a Buddhist university in this region .The issue was first raised and discussed during the three-day international seminar on ‘India’s North Eastern Region and Buddhist Heritage – Bridge between South Asia and South East Asia.

Members from the International Buddhist Confederation (IBC) met with the Tripura Chief Minister Biplab Kumar Deb and discussed the opening of a Buddhist University in the state.

The two members Buddhist team included Ven. Khemachara Bhikkhu, secretary IBC, and Dr. Dharmapiya, principal of the Dhamma Dipa school beside Sankar Roy, MLA of Sabroom where the proposed university is likely to be set up.

Later speaking with reporters Dr Dharmapiya said that as Buddhist heritage is spread over a larger area and in different national boundaries in this part, it is imperative to create an institutional network by reviving the forgotten relics of a religion there has been a unique initiative to unite India with the South East Asian and the ASEAN nations.

According to him, Buddhism has been a common religion of these nations and that went from India can play a vital role in reviving the heritage and cultural linkages for sub-regional cooperation amongst India, Myanmar, Sri Lanka, Vietnam, Laos and other nations of Southeast Asia.

It was organized by the New Delhi based International Buddhist Confederation (IBC), in collaboration with the Asian Confluence, Shillong and the Dhamma Dipa Foundation and in which around 200 participants from 12 nations including ministers, parliamentarians, heads of spiritual organizations, scholars, writers, policy-makers, diplomats, entrepreneurs and members of the civil society from various countries participated.

The idea was religion need not always be dividing factors and the shared history of the region, as seen through Buddhist heritage and living Buddhist traditions, cultural vestiges, and philosophical richness can form an important element of political and economic engagement amongst the North Eastern states of India and the immediate neighboring countries.

A major cause of our educational problems lies in the “commercialization” of education. The industrial growth model of society, which today extends its tentacles even into the largely agrarian societies of South and Southeast Asia, demands that the educational system prepare students to become productive citizens in an economic order governed by the drive to maximize profits. Such a conception of the aim of education is quite different from that consistent with Buddhist principles. Practical efficiency certainly has its place in Buddhist education, for Buddhism propounds a middle path which recognizes that our loftiest spiritual aspirations depend on a healthy body and a materially secure society. But for Buddhism the practical side of education must be integrated; with other requirements designed to bring the potentialities of human nature to maturity in the way envisioned by the Buddha. Above all, an educational policy guided by Buddhist principles must aim to instill values as much as to impart information. It must be directed, not merely toward developing social and commercial skills, but toward nurturing in the students the seeds of spiritual nobility.