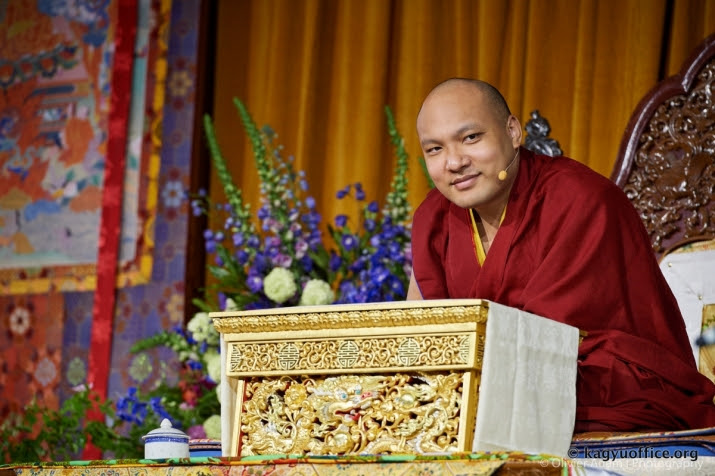 His Holiness the 17th Gyalwang Karmapa Ogyen Trinley Dorje is the head of the 900 year old Karma Kagyu Lineage and guide to millions of Buddhists around the world.

Currently 31 years old, the Karmapa resides in his temporary home at Gyuto Monastery in India after making a dramatic escape from Tibet in the year 2000. Traveling the world, the Karmapa skillfully teaches traditional Tibetan Buddhist Dharma teachings, while also advocating topics such as environmental care, feminism, and more.

The 17th Karmapa Ogyen Trinley Dorje arrived in London last week, marking his first ever visit to the United Kingdom. He was warmly welcomed by throngs of devotees and well-wishers, including senior rinpoches resident in the UK, some 37 years after the last visit by the 16th Karmapa Rangjung Rigpe Dorje (1924–81), who was instrumental in enabling the transmission of Vajrayana Buddhism to the West.

Following his safe arrival on 17 May, public events during the Karmapa’s historic 11-day visit have included a three-part teaching on the “Eight Verses for Training the Mind,” the famous lojong text by Geshe Langri Tangpa (1054–1123), in London’s Battersea Park on 20–21 May, followed by a Chenrezig Empowerment. On 27 May, His Holiness is scheduled to give a Long Life Empowerment in Surrey.

“To begin with, I would like to express my great delight at this opportunity that has come to pass for me to visit London, the capital of the United Kingdom, for the first time,” His Holiness said during his opening address in Battersea Park on Saturday, following a heartfelt introduction by Choje Lama Yeshe Losal Rinpoche, the head of Samye Ling Monastery in Scotland—the first Tibetan Buddhist center in the West.

“Especially, I would like to extend my warmest greetings to all you friends who are gathered here. I have been waiting for a long time to visit the United Kingdom, and now that opportunity has finally arisen and I’m so happy about this,” he continued. “Even though it’s my first visit, still the time allotted for this visit is very short. However, I consider this to be merely the beginning. I think of this opportunity of this short initial visit as a gateway so that I will be able to come again and again in the future.

“Lama Yeshe, in his introduction, mentioned the activities of the great Akong Rinpoche [1939–2013] and in accordance with what he said, for the longest time—while I was waiting and hoping to be able to visit London—I always thought to myself, ‘when I get to London I will see Akong Rinpoche there.’ But of course, now that I have had the opportunity to come here, I wasn’t able to meet with him when I arrived. There is certainly a sadness to this, but nevertheless Lama Yeshe and others are continuing to faithfully uphold the vision and enlightened activities of Akong Rinpoche, and this is very heartening. Furthermore, I am confident that in the future I will be able to visit the very important seat that is Samye Ling.”

The Karmapa then proceeded with his explanation of the lojong mind-training principals contained within the “Eight Verses for Training the Mind.”

His Holiness’ activities in the UK have also included tours of the British Museum, where he viewed highlights of the museum’s renowned collection, including Buddhist artefacts from China, India, and Tibet, and the British library, home to collections of texts from Dunhuang and rare Tibetan and South Asian Buddhist manuscripts, including the 16th Karmapa’s edition of the Derge Kangyur andTengyur.

After concluding his affairs in the UK, His Holiness will embark on his first visit to Canada from 29 May, beginning in Toronto, before traveling to Calgary, and then on to Vancouver in mid-June. Public events scheduled for this visit include numerous teachings and empowerments, among them “Mindfulness and Environmental Responsibility” on 31 May, a Manjushri Empowerment on 3 June, a panel discussion on the environment and social inequality on 21 June, and an Akshobhya Teaching and Empowerment from 23–24 June.

The Karmapa has previously visited the US on two occasions, in 2008 and 2011, and has made three official visits to Europe, the most recent of which took place in 2016. In 2010, the Karmapa founded the Karmapa Foundation Europe, headquartered in Brussels, to serve as his representative in Europe. The 16th Gyalwang Karmapa visited the UK and Canada twice, in 1974 and 1977 as part of larger tours of Western cities, visiting Samye Ling Monastery in Scotland on both occasions. His final private visit to the UK was in 1980.

The Karmapa is the head of the Karma Kagyu, the largest lineage of the Kagyu, one of the four major schools of Tibetan Buddhism, the others being Gelug, Nyingma, and Sakya. The institution of the Karmapa is the oldest tulku lineage in Tibetan Buddhism, predating the Dalai Lama lineage by more than two decades. His Holiness was born in 1985 in the Lhathok region of Kham in eastern Tibet and received his initial education at Tsurphu Monastery. In January 2000, at the age of 14, he fled to India and currently resides near Dharamsala.
Share this...