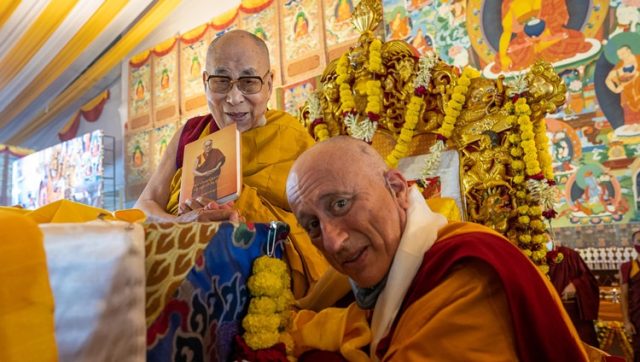 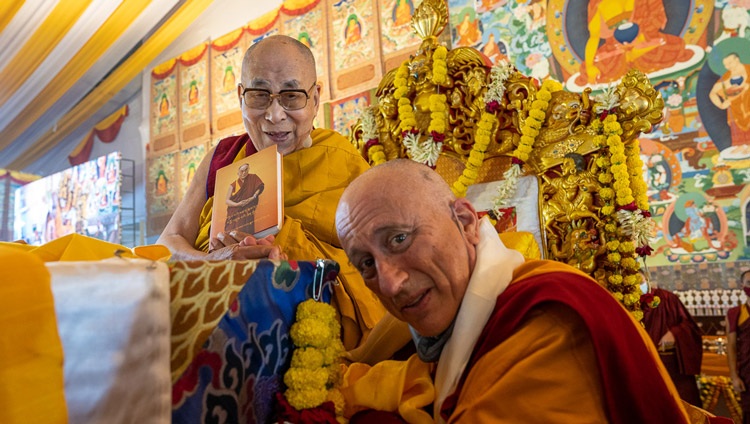 Ratö Khensur, Nicholas Vreeland, presenting His Holiness the Dalai Lama with the first copy of a newly published book that contains His Holiness’s spiritual biography composed by the late Ratö Khyongla Rinpoché at the start of the second day of teachings in Bodhgaya, Bihar, India on December 30, 2022. Photo by Tenzin Choejor

Bodhgaya —  This morning, His Holiness the Dalai Lama returned to the Kalachakra Ground for a second round of teachings. The ground, filled to capacity, was packed with 50,000 people while there were another 15,000 outside following proceedings on large screens. Of these 65,000 people, 3000 were foreigners from 80 countries.

After he had waved to the crowd and saluted the senior lamas, His Holiness took his seat on the throne. A group of children, students of the Root Institute school, sat down before him and fervently recited the ‘Heart Sutra’ in Sanskrit. Meanwhile, Ratö Khensur, Nicholas Vreeland, presented His Holiness with the first copy of a newly published book that contains His Holiness’s spiritual biography composed by the late Ratö Khyongla Rinpoché.

Next, eight representatives—five from Japan and one each from Austria, Israel and the USA—of the project ‘Flame of Hope’ presented a lantern to His Holiness, the flame of which had been lit from the flame of peace in Hiroshima. ‘Flame of Hope’ wishes to change the world by lighting the spark of hope for peace in children’s hearts. Working hand in hand with spiritual leaders and other concerned persons, Flame of Hope aims to spread this wish around the world. Their slogan is One Earth—One Prayer—One Flame.

After tea and bread had been distributed, blessed by being offered to the Three Jewels, and enjoyed, His Holiness spoke. 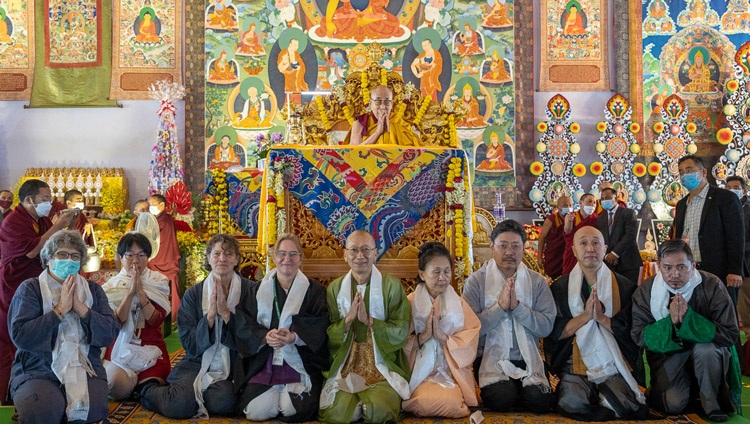 Representatives of the project ‘Flame of Hope’ posing for a photo with His Holiness the Dalai Lama after presenting him with a lantern which had been lit from the flame of peace in Hiroshima on the second day of teachings in Bodhgaya, Bihar, India on December 30, 2022. Photo by Tenzin Choejor

“Today, we have a second opportunity to hold a discourse in this sacred place, which is most fortunate. Buddha Shakyamuni came, walked this land, and attained enlightenment here.

“I’ve been given this flame from Hiroshima, which was the first place on which an atomic bomb was dropped and so very many people perished. I’ve been there, heard about those who died and met survivors whose health was frail. Thinking of them all I felt immensely sad. I thought how good it would be if the world were free from nuclear weapons, which is something I have deeply prayed for.

“Even now war goes on and weapons are being used by one side against others. Although nuclear weapons have not been employed since the bombing of Japan, too many countries wish to possess them. Today, in this sacred place of Vajra-asana, we have here a flame of hope and an opportunity to pray for lasting peace in the world.

“There may be no immediate danger of a wider war breaking out, but we all face the threat of the Covid pandemic. This is a serious risk and we should all pray for the pandemic to subside. As human beings we are all subject to the sufferings of birth, aging, sickness and death. Let’s pray together that as far as the pandemic is concerned, we may soon find relief.”

His Holiness led the congregation in reciting the mantras of Avalokiteshvara and Arya Tara together for several minutes. He remarked that having the opportunity to gather merit and purify negativity for a second day, being in such a sacred place makes a difference. Doing practice here with a positive motivation evokes the blessings of the Buddha and other great masters who have practised here in the past. 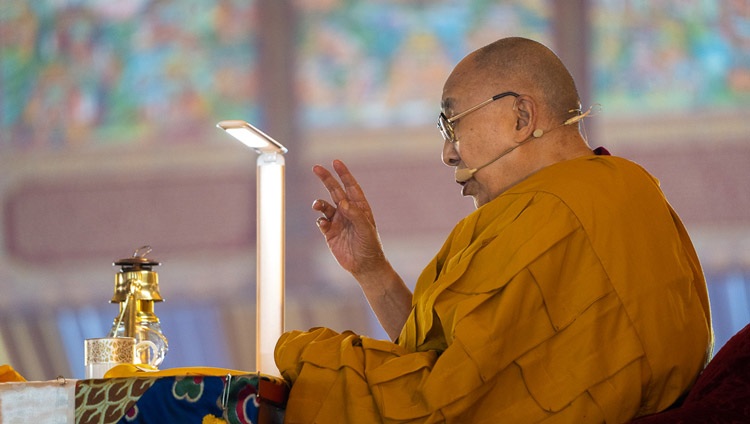 His Holiness the Dalai Lama addressing the crowd on the second day of teachings at the Kalachakra Teaching Ground in Bodhgaya, Bihar, India on December 30, 2022. Photo by Tenzin Choejor

“This is why I remind you to find the time to cultivate bodhichitta and an understanding of emptiness while you are here. And if you can continue to cultivate these qualities through calm abiding and analytical meditation in your day-to-day life, after some time you’ll notice that you can bring about change in your mind. You may not yet have experience of these qualities, but if you focus your mind on them, it will come.

“All the flaws within us arise because we cling to the inherent existence of people and things. We can reduce this misconception by meditating on emptiness and combining that meditation with the awakening mind of bodhichitta. If you do this, you will feel some effect. This is just what the Buddhas of the past have done.

“Although Tibet and its surrounding regions come under the care of Avalokiteshvara, where I was born in Amdo, I had no role model to follow. Having come to Central Tibet, I began to study the classic philosophical books with my two tutors, Kyabjé Ling Rinpoché in particular. Then, in exile, I had the opportunity to become better acquainted with the practice of bodhichitta, so I have personal experience of the change it can bring. If you meditate on bodhichitta and emptiness you’ll be helping yourself and others in this and future lives.

“Study, reflect and meditate on what you’ve understood. If you practise in this way, over days, months and years, you’ll see a change come about in your mind. This is what I wanted to tell you.”

His Holiness resumed his reading of Nagarjuna’s ‘Commentary on the Awakening Mind’ with verse 57 that tells us that just as sweetness is the nature of molasses and heat is the nature of fire, the nature of all phenomena is emptiness. He noted that we all have Buddha-nature. We are human beings who have encountered the Buddha’s teachings and have the opportunity and resources to tame our minds by expanding our understanding. 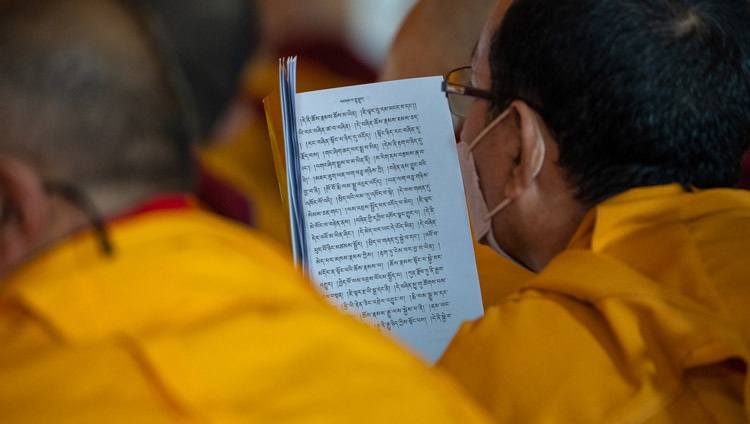 Monks in the audience following the Nagarjuna’s ‘Commentary on the Awakening Mind’ being taught by His Holiness the Dalai Lama on the second day of teachings in Bodhgaya, Bihar, India on December 30, 2022. Photo by Tenzin Choejor

His Holiness mentioned that Buddhist tradition entails scripture and realization and it is kept alive through study and practice, which involves the three higher trainings in ethics, concentration and wisdom. Besides philosophical assertions, realization also requires a knowledge of the workings of the mind. Through daily acquaintance with the minds of whitish appearance, reddish increase and black near attainment, as well as the three empties that presage the subtle clarity and awareness of the clear light of death, we hope ultimately to reach the state of ‘all-empty’ giving rise to the illusory body.

His Holiness concluded: “All suffering comes from ignorance; that is what is to be eliminated. And we can do that by coming to understand dependent arising, the king of reasons. This is what I wanted to say.”

As he left the stage His Holiness saluted several senior Lamas in the traditional Tibetan manner of mutually touching brows. Young tulkus he acknowledged with a pat on the head. Smiling broadly, he waved to the crowd, then rode back to his monastery by golfcart.

After lunch, the Chief Minister of Bihar, the Hon’ble Nitish Kumar paid His Holiness a visit and the two of them discussed the importance of ancient Indian wisdom and the value of culture. 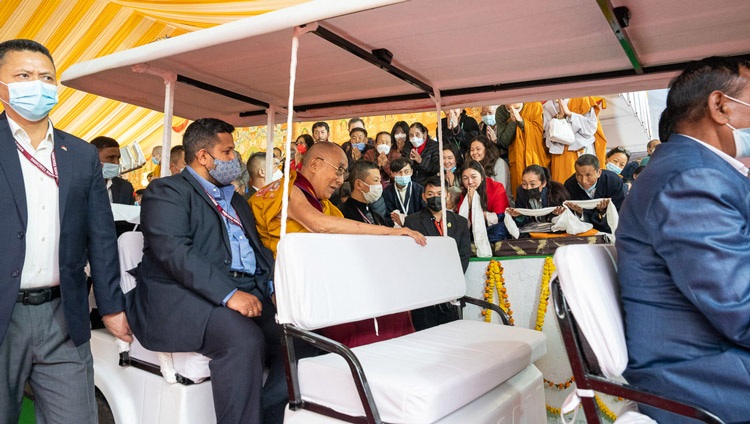 His Holiness the Dalai Lama returning to his residence at the Tibetan Monastery at the end of the second day of teachings at the Kalachakra Teaching Ground in Bodhgaya, Bihar, India on December 30, 2022. Photo by Tenzin Choejor 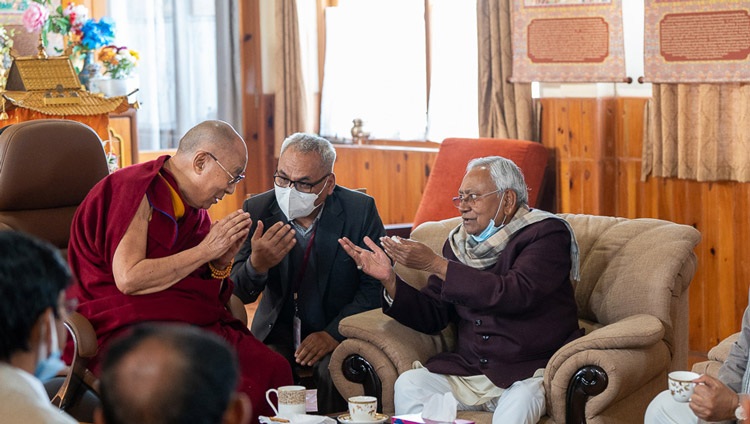 His Holiness the Dalai Lama in conversation with Bihar Chief Minister Nitish Kumar at His Holiness’s residence at the Tibetan Monastery in Bodhgaya, Bihar, India on December 30, 2022. Photo by Tenzin Choejor