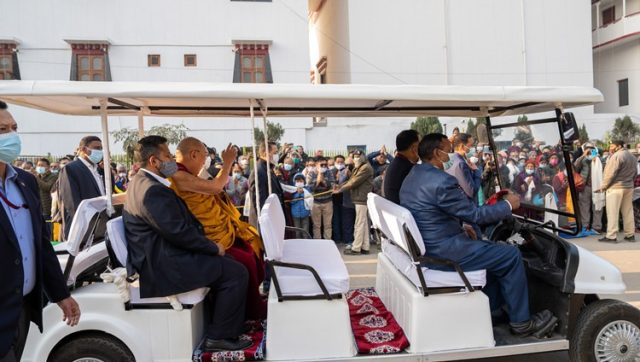 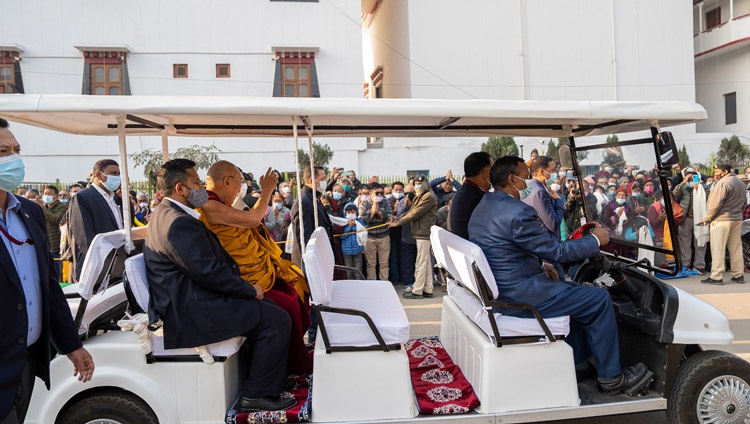 His Holiness the Dalai Lama waving to well-wishers gathered on road to the Kalachakra Teaching Ground in Bodhgaya, Bihar, India on December 29, 2022. Photo by Tenzin Choejor

Bodhgaya — This morning, under a clear blue sky, His Holiness the Dalai Lama drove the short distance to the Kalachakra Ground, smiling and waving to well-wishers who had gathered on either side of the road. Climbing down from the golf cart at the front of the stage, he made a point of waving to the crowd in front and to his right and left as is his custom. Then he turned and greeted the Sakya Gongma Trichen, the Gaden Tri Rinpoché, as well as the Sharpa and Jangtsé Chöjés, following which he also saluted the Sakya Trizins before taking his seat on the throne.

Theravada monks, mostly from two Thai monasteries, chanted the ‘Karuniya Metta Sutta’ in Pali—the Buddha’s words on loving kindness, which was followed by a recitation of ‘The Three Continuous Practices’ in Tibetan. Tea and bread were distributed.

“Today, in this special place where the Buddha attained enlightenment, I would like to hold a ceremony for generating the awakening mind of bodhichitta and taking the Bodhisattva Vows,” His Holiness declared. “This, the Seat of Enlightenment, is the most sacred of the sites associated with the Buddha. Elsewhere he taught the Four Noble Truths and the Thirty-seven Harmonies of Enlightenment, but here we are reminded of the essence of all his teachings, which is to discipline the mind for the benefit of sentient beings extensive as space.

“I generate bodhichitta every day, cultivating a concern for the welfare of others. The more you become acquainted with such motivation, the more you’ll find you hold others dearer than yourself. In this way you’ll realize self and others are interdependent. 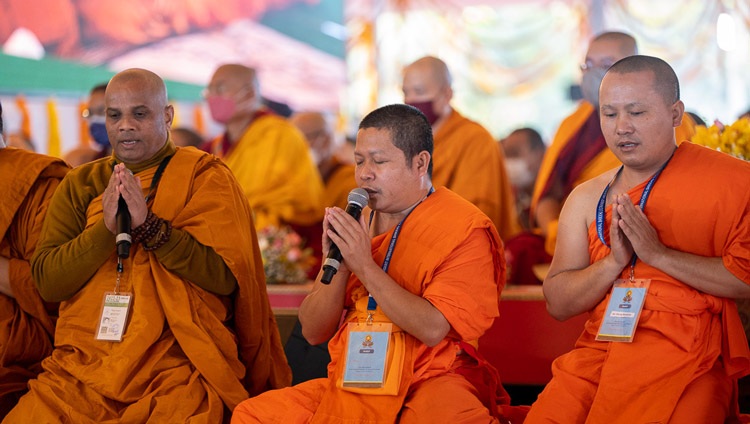 Theravada monks chanting the ‘Karuniya Metta Sutta’ in Pali at the start of the first day of His Holiness the Dalai Lama’s teaching at the Kalachakra Teaching Ground in Bodhgaya, Bihar, India on December 29, 2022. Photo by Tenzin Choejor

“Since I received the transmission of ‘Entering the Way of the Bodhisattva’ (Bodhicharyavatara) I have engaged in the practice of equalizing and exchanging self and others every day. Doing so is a source of true happiness. The practice of bodhichitta is the essence of all the Buddha’s teachings. With this in mind we need to remember that all 8 billion human beings alive today wish to be happy and to avoid suffering. As far as this is concerned, we’re all the same. Once you’ve developed bodhichitta, you’ll find unfavourable circumstances become favourable.”

His Holiness began to describe how to visualize the Buddha in front and was reminded that a couple of days ago, at the Wat-pa Thai Temple, he gazed at a painting of the Buddha on the wall. He revealed that during the inauguration of a program that will see monks belonging to the Pali and Sanskrit Buddhist traditions exchanging experiences and getting to know each other’s traditions better, he felt as if the Buddha was stroking his head in approval and rewarding him with a chocolate. He added that if we carry out the practice of what the Buddha taught it’s reasonable to feel he will be pleased.

“It’s through practice that you taste the real flavour of the teaching. The Buddha himself cultivated bodhichitta, engaged in the practices of a bodhisattva and became a fully awakened being. We should think, ‘Just as the Buddha has done before me, I will achieve this goal.’ The Buddha will not fail us. He has taught the Four Noble Truths as well as the Perfection of Wisdom. The crucial point is for us to transform our unruly minds into the mind of a Buddha.

“Listen to and study the Buddha’s teachings. Reflect on them over and over again, then meditate on what you’ve understood. Be determined to work for the welfare of others. This is how you will reach the domain of the enlightened ones. If you have bodhichitta within, you’ll be at peace.”

His Holiness again advised his listeners to visualize the Buddha accompanied by the great Buddhist masters of India and Tibet before them.

“We’re all human beings, we’ve met with the teachings, wherever we are we can determine to work for all sentient beings.” 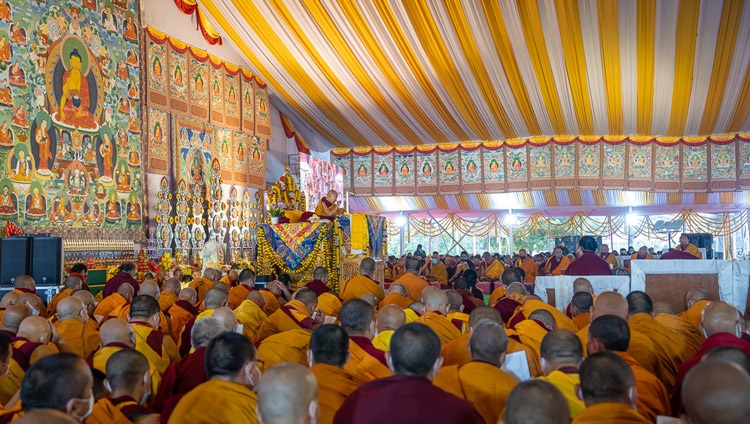 His Hoiness the Dalai Lama speaking on the first day of teachings at the Kalachakra Teaching Ground in Bodhgaya, Bihar, India on December 29, 2022. Photo by Tenzin Choejor

His Holiness then led the congregation in reciting the verses that are at the core of the ceremony:

I seek refuge in the Three Jewels;
Each and every wrongdoing I confess.
I rejoice in the virtues of all beings.
I take to heart the state of Buddhahood.

I go for refuge until I am enlightened
To the Buddha, the Dharma, and the Supreme Assembly,
In order to fulfil the aims of myself and others
I develop the awakening mind.

“I feel fortunate to have had this opportunity to give the Bodhisattva Vows,” His Holiness remarked, “you too can rejoice at having been able to take them. Study them and protect them.”

His Holiness took up the text he was going to teach and commented that he wouldn’t finish reading it today. First the title, is given in Sanskrit ‘Bodhichittavivarana’ and next, it is written in Tibetan ‘byang chub sems kyi ‘grel pa’. Both mean Commentary on the Awakening Mind.

His Holiness read up to verse 41 which indicates that the mind is empty of true existence. Reading on, he noted that ‘dependent arising’ is a profound instruction. It demonstrates that things are empty of inherent existence on the one hand, yet do function on a conventional level on the other. He summarized the morning’s events as having taken the Bodhisattva Vow and engaged in profound practice in this most sacred place. He undertook to continue tomorrow.

Coming to the front of the stage, before leaving for his monastery, His Holiness made a point of waving to the audience again, to the right, left and the front, and they responded with cheers and applause. 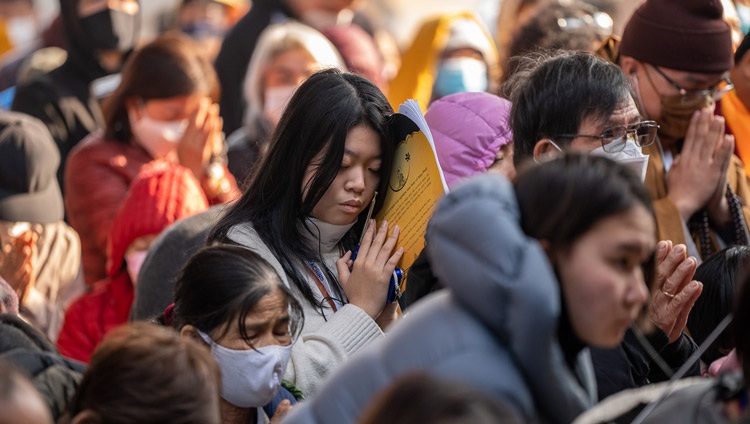 Members of the audience taking Bodhisattva vows from His Holiness the Dalai Lama on the first day of teachings at the Kalachakra Teaching Ground in Bodhgaya, Bihar, India on December 29, 2022. Photo by Tenzin Choejor