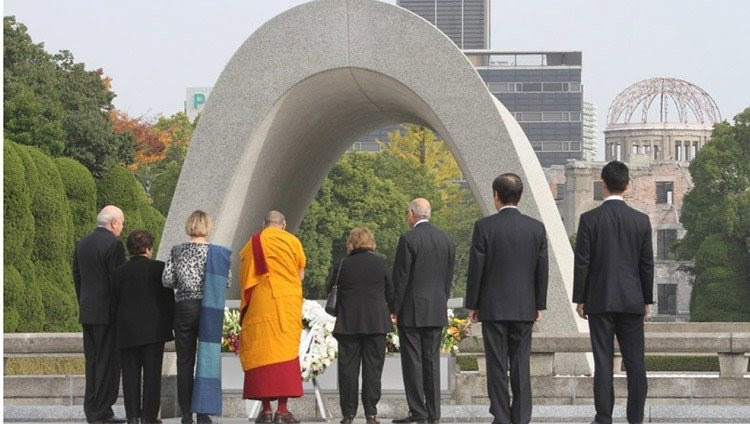 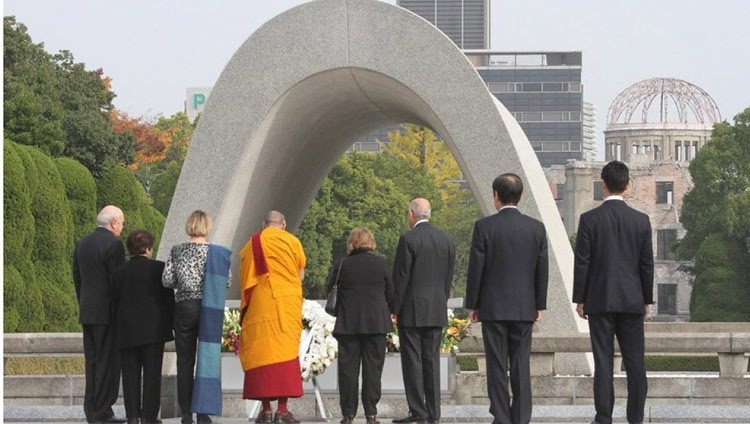 His Holiness the Dalai Lama and fellow Nobel Laureates paying their respects at Hiroshima Memorial Park in Hiroshima, Japan on November 14, 2010. Photo by Taikan Usui

In his statement on the occasion of the 75th anniversary of the atomic bombings of Hiroshima and Nagasaki, Tibetan spiritual leader and peace icon, His Holiness the Dalai Lama urged governments, organizations and individuals to “rededicate themselves to making the achievement of peace the centrepiece of our lives”.

Japan on Thursday remembered the victims of the bombings on Hiroshima and Nagasaki, the world’s first atomic bomb attack.

“Despite many great developments that also took place, the 20th century was an era of violence in which some 200 million people were killed, including the horrific use of nuclear weapons,” His Holiness said. “Now, in our increasingly interdependent world, we have a chance to make this a more peaceful century.”

Reiterating his call for global peace and demilitarisation, His Holiness said: “When conflicts arise they should be settled through dialogue, not the use of force. We need to eliminate the threat of nuclear weapons, with the ultimate aim of a demilitarized world. War means killing. Violence leads to counter violence. We need to put an end to combat and the production of weapons and construct a more peaceful world.”

“We human beings have created many of the problems in today’s world. As long as we have strong negative emotions and we view our fellow beings in terms of ‘us’ and ‘them’, there will be a tendency to try to destroy them. We must recognise the oneness of humanity, and understand that we will not achieve peace merely through prayer; we need to take action.”