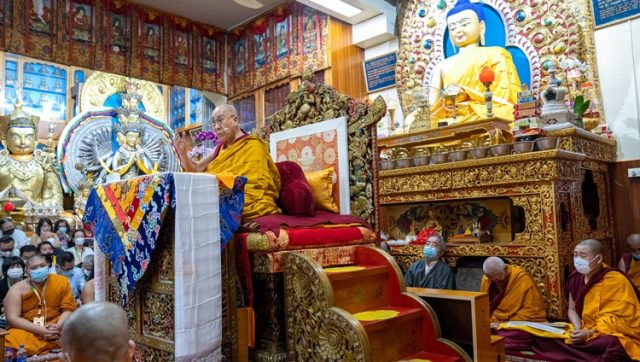 This morning, a group of Thai Buddhist monks recited the Mangala Sutta in Pali as His Holiness the Dalai Lama took his seat on the throne in the Tsuglagkhang, the Main Tibetan Temple in Dharamsala. There followed the chanting of the ‘Heart Sutra’ in Chinese, including the prayer that Chinese recite at the end that encapsulates the practice of the Dharma:

His Holiness began by reciting the final verse of homage from Nagarjuna’s ‘Fundamental Wisdom of the Middle Way’:

I prostrate to Gautama
Who, through compassion,
Taught the exalted Dharma,
Which leads to the relinquishing of all (distorted) views.

“Since we suffer because of ignorance,” he explained, “we have to eliminate all distorted views and develop the correct view. If we are to do this, we need to study, reflect on what we’ve learned and meditate on what we’ve understood.

“When I first heard about emptiness, I felt it was good, but it was only after I had studied ‘Fundamental Wisdom’, ‘Entering into the Middle Way’ and its ‘Auto-commentary’ and thought deeply about it that I gained conviction.

“If you think carefully, you’ll see that things don’t exist from their own side. As quantum physicists have observed, things do not exist as they appear. They have no objective existence whatsoever.

“The verse I recited at the start is powerful because it makes clear that the Buddha taught to help beings eliminate their distorted views. When I reflect on emptiness, I focus on three verses from chapter six of ‘Entering into the Middle Way’ which disclose absurd consequences that would prevail if things were to exist objectively.”

His Holiness noted that the Buddha undertook six years of austere practice and discovered that single-pointed concentration alone did not overcome distorted views. Later, masters like Nagarjuna examined what he taught in the light of logic and reasoning. They made clear that things do not exist as they appear. The Nalanda Tradition emerged from their findings and this tradition survives today.

“As human beings,” His Holiness remarked, “we have the opportunity to study the Dharma, to understand and experience it. When I was young, I memorized important texts, listened to my tutors’ explanations of them and thought about them deeply. In exile, I was able to really reflect on what I’d learned, so, from that point of view, coming into exile was like a blessing in disguise. It’s through study, reflection and meditation that transformation takes place.

“I may not claim to have gained genuine experience, but I’m confident that my efforts have brought me peace of mind. I’m quite relaxed. The key is to tackle our emotions, examining how, for example, anger arises and how it can be subdued. The important thing is not to concern yourself with the next life or achieving omniscience, it’s about learning to deal with negative emotions here and now.

“Relying on the Buddha’s advice that things have no objective existence and the altruistic awakening mind we can bring about change within us. We can learn not to harm others but to help them—we can learn to be warm-hearted,”

He observed that at the start of his treatise Chandrakirti pays homage to great compassion, alluding to the fact that Buddhas become enlightened through a combination of the awakening mind of bodhicitta that is rooted in compassion and an insight into emptiness.

His Holiness declared that compassion, love and affection are important because life is so much better if we cultivate these qualities. Our mother’s care as soon as we’re born gives us an early lesson in these responses, but we seem to lose interest in them when we go to school because little attention is given to them there. He mentioned his plans to hold discussions with educationists on ways to restore an admiration for love and compassion in the education system.

Recalling that Mahatma Gandhi made the age-old principle of ‘ahimsa’, the idea of non-violence and doing no harm, widely known, His Holiness revealed that today the world needs to learn about compassion.

His Holiness began to read from verse 12 of the first chapter that highlights giving. Reading to the end of the chapter he noted that bodhisattvas are entirely dedicated to the well-being of others. He read on to the fourth verse of the second chapter and announced that he wanted to introduce the all-encompassing yoga mind.

“If you think only of yourself,” he suggested, “you’re only concerned with one person. This is a narrow perspective in the context that all other sentient beings are just like you in wanting to avoid suffering and find happiness. A wiser approach to self-interest is to take other beings into account, to think of doing others no harm and helping them as much as possible.

“Next, reflect on how things are empty of objective existence, of independent existence. Chandrakirti describes this realization as follows:

Thus, illuminated by the rays of wisdom’s light,
the bodhisattva sees as clearly as a gooseberry on his open palm
that the three realms in their entirety are unborn from their very start,
and through the force of conventional truth, he journeys to cessation. 6.224

“He goes on to narrate how the bodhisattva, like a king of swans soaring ahead of other accomplished swans, with white wings of conventional and ultimate truths spread wide, propelled by the powerful winds of virtue, cruises to the excellent far shore, the oceanic qualities of the conquerors.

“If you check who you are, your body is not you. Your mind is not you, and yet you have a strong sense of cherishing yourself. Think about how, whether you are going somewhere or simply resting, you cannot pin-point a self in connection with your body or mind. Consequently, you may conclude that the idea of a self is merely designated on the collection of psycho-physical aggregates.”

His Holiness advised his listeners to imagine the awakening mind of bodhichitta appearing as a moon disc at their heart and an understanding of a lack of independent existence as a white vajra standing on the moon. He recommended they recite Om Sarva Yoga Chitta Utpadaya mi three times.

His Holiness divulged that he has seen a change in himself as a result of thinking of bodhichitta and emptiness first thing on waking in the morning for years. He urged his listeners to do the same, to be happy, and to share their experience with others.