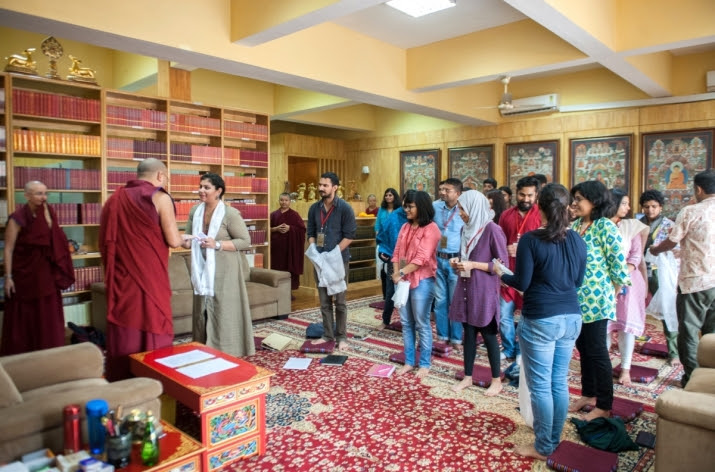 His Holiness the Karmapa meets postgraduate psychology students in Dharamsala on 29 September. From kagyuoffice.org

His Holiness Ogyen Trinley Dorje, the 17th Gyalwang Karmapa last week received 20 postgraduate psychology students in Dharamsala, northern India, who will attend a special program of meetings with His Holiness over 11 days. During the course of the program, the students and the Karmapa will discuss and examine how Buddhism and modern psychology approach and understand the various human emotions.

The Karmapa’s meetings with the students from India’s Ambedkar University Delhi, who represent a broad cross-section of religions and backgrounds from across India, including the Buddhist, Hindu, Jain, Muslim, and Sikh communities, will feature discussions, presentations, and Q+A sessions on a range of topics proposed by the students themselves that encompass jealousy and envy, love and attachment, greed, desire and contentment, guilt and shame, stress and anxiety, faith and hope, and fear, terror and courage.

“This is the first time that I have had the opportunity to hold such a long series of meetings with an Indian student group,” said His Holiness to the students during their initial meeting with him on 29 September. “For me this is a wonderful occasion because I can enter into a world that I cannot usually experience, and explore social issues and contexts I am not so familiar with. So for me this is a great opportunity, and I want to express how happy I am to have this time together with you.” (Karmapa)

Considered the third most important figure within Tibetan Buddhism after the Dalai Lama and the Panchen Lama, the Gyalwang Karmapa is the head of the Karma Kagyu, the largest lineage of the Kagyu, one of the four major schools of Tibetan Buddhism, the others being Gelug, Nyingma, and Sakya. 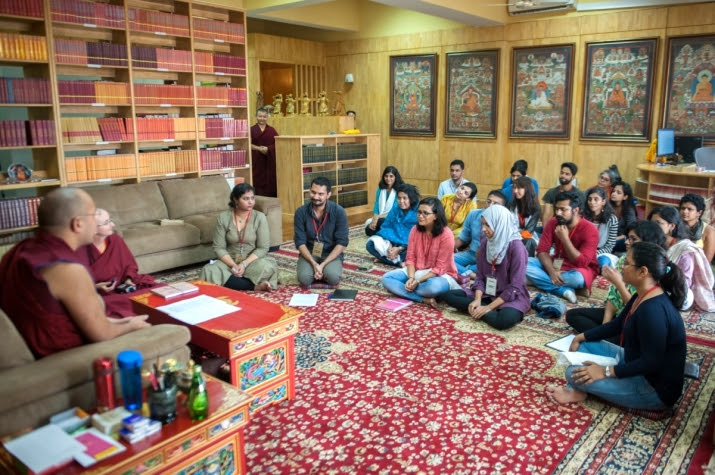 Examining how Buddhism and modern psychology approach and understand human emotions. from kagyuoffice.org

Over the course of their time with His Holiness, the students have been tasked with preparing presentations on modern psychology’s understanding of human emotions, outlining the ways in which each emotion can be defined and viewed. The presentations must also address how these emotions are perceived within their own communities, highlighting that although they form part of the universal human experience, gender as well as religious, social, and cultural background all play a role in how these same emotions are expressed, valued, and experienced by individuals and communities.

The program was organized and sponsored at the Karmapa’s request by the Kun Kyong Charitable Trust, which the His Holiness established in 2013 to promote education, women, the environment, health, and welfare. Over the past five years, the Karmapa has sought out opportunities to interact with university students and young professionals from various countries on a range of topics, including identity, leadership, and gender issues. These interactions, including the ongoing meetings with the Ambedkar University students, reflect the Karmapa’s conviction that Buddhist teachings can serve as a resource for non-Buddhists to find new ways to address matters of universal concern in the 21st century.

The institution of the Karmapa is the oldest tulku lineage in Tibetan Buddhism, dating back to the first Gyalwa Karmapa, Düsum Khyenpa (1110–93), and predating the Dalai Lama lineage by more than two decades. Due to a dispute within the Karma Kagyu school over the recognition process, the identity of the 17th Karmapa is a matter of some controversy. The majority of Tibetan Buddhists recognize Ogyen Trinley Dorje as the incarnation of the 16th Karmapa Rangjung Rigpe Dorje, although an influential minority recognizes Trinley Thaye Dorje. The movements of Ogyen Trinley Dorje, who is based in the town of Sidhbari in Dharamsala after fleeing Tibet at the age of 14.
As a scholar and meditation master, as well as painter, poet, songwriter and playwright, the Gyalwang Karmapa embodies a wide range of the activities that Karmapas have engaged in over the centuries. As an environmental activist, computer enthusiast and world spiritual leader whose teachings are often webcast live, the Seventeenth Gyalwang Karmapa has brought the Karmapa lineage’s activities fully into the 21st century.