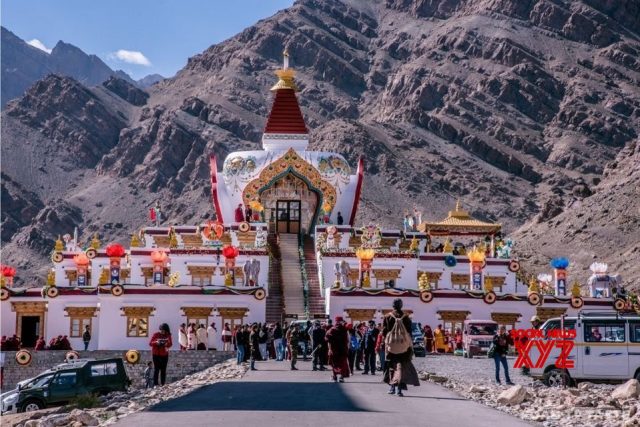 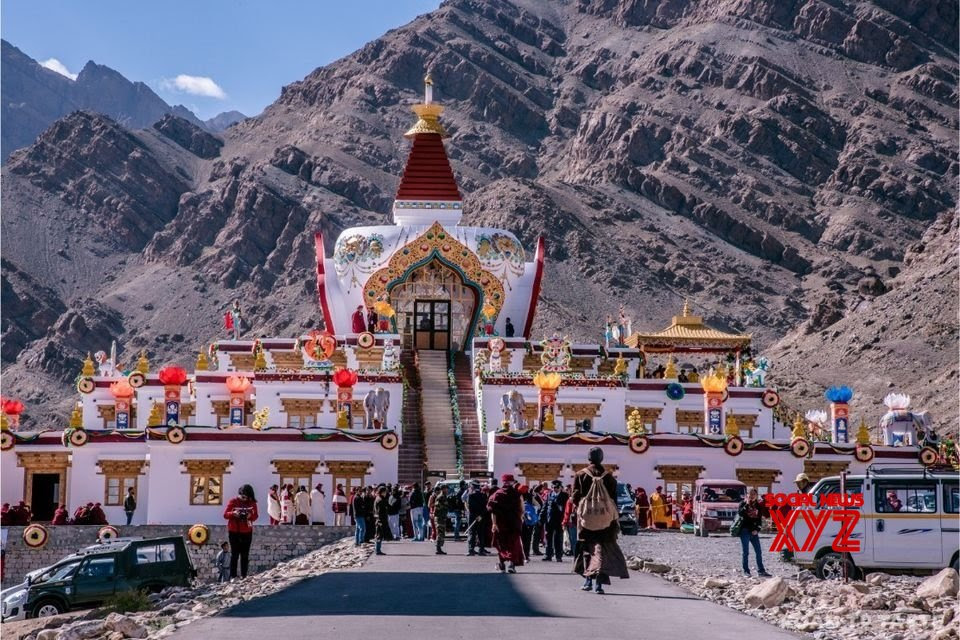 The ‘Har Ghar Tiranga’ event is being marked by Buddhist organisations and institutions across the Himalayan belt, including Ladakh with enthusiasm and high spirits. Some of the monasteries in Ladakh have been planning and working on the modalities to have large Tirangas placed at vantage locations.

The Spituk monastery, which is located around 8 km from Leh is a remarkable structure which forms part of the tourist circuit in the city. Built in the 11th century, and founded as a Red Hat institution, the monastery was taken over by the Yellow Hat sect in the 15th century.

It has more than 100 monks and a giant statue of Kali which is highly revered by the locals. The monastery celebrated the ‘Har Ghar Tiranga’ event by hoisting the national flag on August 6 at the monastery. The junior monks also formed part of the larger celebration during the day.

The Stakna monastery, which is another beautiful landmark 25 kms from Leh belongs to the Drugpa sect. The monastery is located along the banks of the Indus river. It was founded in the late 16th century by a Bhutanese scholar and saint, Chosje Modzin. The monastery is built on a hill shaped like a tiger’s nose.

The famous Hemis Monastery which belongs to the Drupka Lineage, and situated 45 km from Leh, also marked the occasion with flags being hoisted by young monks living in the monastery. The celebrations were marked by chanting by the monks while many of them held the flag firmly in the high windy condition. The monastery is famously known for the annual Hemis festival honouring Padmasambhava which is held in the month of June each year.

The Hemis festival takes place in the rectangular courtyard in front of the main door of the monastery. Large number of tourists who visited the monastery during the event also participated in the ‘Har Ghar Jhanda’ activity.

Another famous monastery — the Thiksey monastery also witnessed large scale celebrations of the ‘Har Ghar Tiranga’ utsav on August 6 when a group of young monks living in this beautiful monastery emerged from the ramparts of the monastery waving large national flags.

The monastery, delicately perched on a mountain and spread over different levels, wore a mood of excitement and celebration with the junior monks having a field day portraying the relevance of the Tiranga.

The tourists and visitors were impressed by the solemn event and formed part of the activity.

The Thiksey monastery belongs to the Gelug sect and is located around 19 kms from Leh. It is known to resemble the Potala Palace in Lhasa, Tibet, and is the largest Gompa in central Ladakh.

The monastery is a twelve storey structure and hosts the Maitreya temple installed to commemorate the visit of His Holiness the 14th Dalai Lama to the monastery in 1970.

The event was marked by a number of other smaller monasteries in the region while some monasteries intend to host the event between August 13 and 15.

With the prominent monasteries in Ladakh celebrating the occasion, a strong message has gone across among the community of monks about the deep essence and significance of the Tiranga.

Soon after the events were held in the above mentioned monasteries the city of Leh also witnessed a spread of the Tiranga among the smaller Buddhist institutions and organisations besides the local market.

There are plans for the event to be held in some of the gompas located far from Leh where small groups of monks plan to travel through remote villages carrying the Tiranga and encouraging the locals to be part of the activity.

The International Buddhist Confederation has been supporting these activities and a representative of the IBC was present at the events held in all the above monasteries.