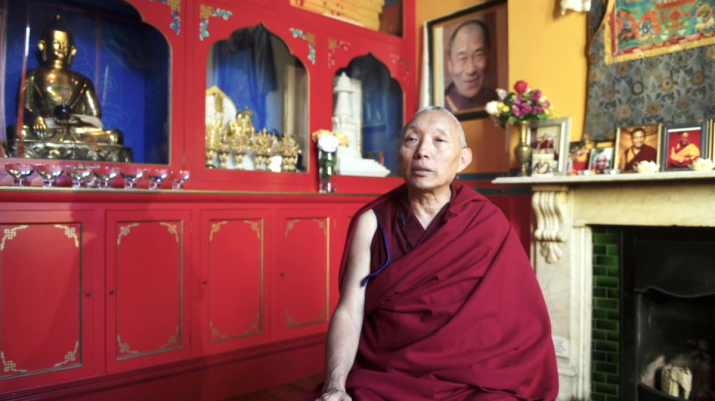 Geshe Tashi Tsering. From youtube.com
Tsering was born in Purang, Tibet in 1958, and his parents escaped to India in 1959. He entered Sera Mey Monastic University in South India when he was 13 years old, and graduated with a Lharampa Geshe degree 16 years later. Geshe Tashi then entered the Higher Tantric College (Gyuto) for a year of study.

Tsering’s teaching career began at Sera, after which he taught the monks at Kopan Monastery, Nepal for a year. He went on to the Gandhi Foundation College in Nagpur, India and then moved to Europe, initially to Nalanda Monastery in the South of France.

Tsering teaches in English and is renowned for his warmth, clarity and humour. Besides Jamyang, he is a regular guest teacher at other Buddhist centres in the UK and around the world as well as creator and teacher of the Foundation of Buddhist Thought, the two-year FPMT correspondence and campus course on the basics of Tibetan Buddhism.

In March 2018 it was announced that Geshe Tashi Tsering had been asked by the Dalai Lama to become abbot of Sera Mey Monastic University in India.

Geshe Tashi Tsering, noted Tibetan Buddhist lama, teacher, and abbot of Sera Mey Monastery in southern India, was earlier this month awarded the British Empire Medal for his services to Buddhism in the United Kingdom. Geshe has been the resident Tibetan teacher of Buddhism at Jamyang Buddhist Centre in London since 1994.

The Gazette newspaper, known as the Official Public Record of the British government, published a public notice dated 8 June, stating:

THE QUEEN has been graciously pleased, on the occasion of the Celebration of Her Majesty’s Birthday, to approve the award of the British Empire Medal (Civil Division) to the undermentioned:

For services to Buddhism in the UK. The British Empire Medal for Meritorious Service (BEM), created in 1922, is awarded by the British Crown in recognition of meritorious service. The honor is divided into civil and military medals, and recipients are entitled to use the post-nominal letters “BEM.”

Geshe Tashi Tsering Lhundrup Palbar was born in Purang in western Tibet in 1958, and was brought to India in 1959 when his parents fled occupied Tibet. His family name, Sutse, meaning “first greet,” is reputed to date to the time of the Bengali Buddhist master Atisha (982–1054), when the family was one of the first to greet the famous scholar and teacher on his arrival in western Tibet.

At the age of 13, he entered Sera Mey Monastery in Bylakuppe in the southern Indian state of Karnataka. After receiving his Geshe Lharamapa degree—equivalent to a doctorate in divinity and the highest academic achievement in Tibetan Buddhism—from Sera Mey Monastery in 1987, where he gained the highest marks possible at every level of the 16-year course, Geshe Tashi Tsering subsequently spent a further year at Gyuto Tantric College where he studied the major Gelug tantras.

His teaching career began at Sera Mey, after which Geshe Tashi Tsering spent a year teaching at Kopan Monastery in Nepal. He then went on to teach at the Gandhi Foundation College in Nagpur, India, before moving to Europe.

He was among the first Tibetan lamas to teach Buddhism in Europe, teaching in English at Foundation for the Preservation of the Mahayana Tradition (FPMT) Dharma centers for more than 25 years. In 1994, after teaching at Nalanda Monastery near Toulouse in France for several years, Geshe Tashi Tsering became the guiding Tibetan teacher at Jamyang Buddhist Centre in London, where he earned a reputation for his warmth and humor, and his ability to make the most profound Buddhist concepts accessible to his students.

In 2017, he earned an MA in social anthropology at the School of Oriental and African Studies of London University, writing a dissertation on mindfulness and social movements. In May last year, His Holiness the Dalai Lama requested that Geshe Tazhi Tsering return to his home monastery Sera Mey to become the 91st abbot.

Geshe Tashi Tsering is the author of The Foundation of Buddhist Thought two-year campus and online courses on the basics of Tibetan Buddhism, and also created the two-and-a-half-year Lamrim Chenmo campus and online courses. He is also the author of a six-volume series of books The Foundation of Buddhist Thought published by Wisdom Publications.