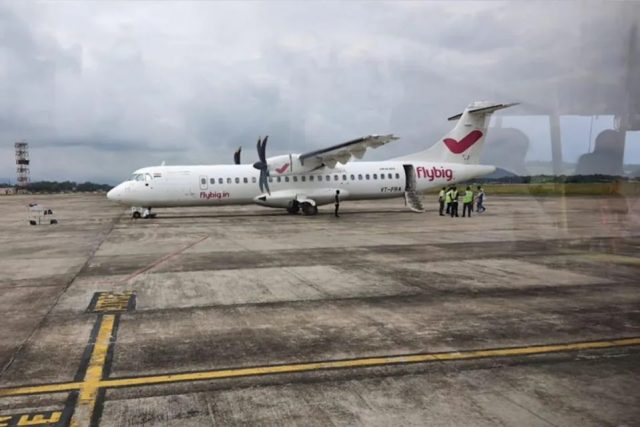 By  —  Shyamal Sinha
Under RCS plans are to connect these underserved airports to key airports through flights that will cost Rs 2,500 for per hour flight. RCS envisages to provide subsidy to airlines to offer these fares. AAI would invest Rs 17,500 crore in upgrading airport infrastructure over a period till 2019-20.
Establish an integrated eco-system which will lead to
significant growth of civil aviation sector, which in turn would
promote tourism, increase employment and lead to a
balanced regional growth.

A water cannon salute was accorded to the first flight at the newly developed Tezu airport, where a new terminal building spread across an area measuring 4,200 sq mt, a runway and a new Air Traffic Control tower are being developed at a cost of Rs 140 crore.

Ravi Kant said that the AAI has always been pivotal in connecting the remote and small places through air transportation, and the expansion of air connectivity in the northeastern states would boost tourism and trade in the region.

The ATR-72 type aircraft of the FlyBig would operate on the Guwahati-Tezu-Guwahati route every Tuesday, Thursday, Saturday and Sunday.

A FlyBig statement said that commemorating India’s 75th Independence Day, the airline is offering a special fare of Rs 75 for Army officers, their immediate family members and senior citizens, honouring their exemplary service to the nation.

“In order to reinforce its network, the airline is adding two new aircraft to its fleet in September and another two in October. The new planes would be stationed at Guwahati and Indore hub,” the statement said.

An AAI official said that the RCS-UDAN scheme would offer flight fares lower than the normal rates.

The scheme was launched by the Union Civil Aviation Ministry in October 2016 to stimulate regional air connectivity and make air travel affordable to the common people.

The AAI at a cost of Rs 650 crore is also developing the Hollongi airport near Arunachal capital Itanagar, to boost air connectivity in the mountainous areas.