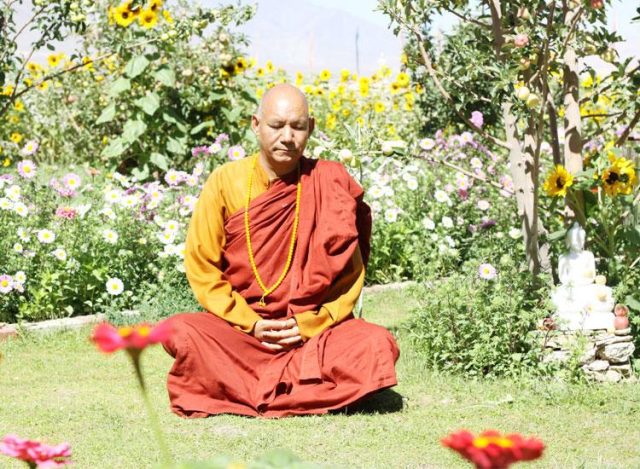 Ven. Bhikkhu Sanghasena is the spiritual director of the non-profit Mahabodhi International Meditation Center (MIMC) in Leh, Ladakh. He is also the founder of the Mahakaruna Foundation, the Save the Himalayas Foundation, and a spiritual advisor to the International Network of Engaged Buddhists (INEB).*

“This small book contains the thoughts, views, and wisdom of Ven. Bhikkhu Sanghasena on various aspects of life, Buddhist practice, and the world around us,” an MIMC representative shared with BDG. “This small, 42-page book contains many short sayings on different aspects of life accompanied by intimate images of life and Buddhism in the remote Himalayas. These words come from Bhikkhu’s years of Buddhist practice and his long and intensive search for meaning and ultimate truth.”

He has since become an exemplar of socially engaged Buddhism, launching numerous projects, events, and initiatives. His outreach work includes providing educational opportunities and refuge for underprivileged children, empowerment and literacy programs for women and other socially disadvantaged groups, healthcare for the sick and needy, and a care home for the aged and destitute. The MIMC has evolved into an expanding campus that has become a hub for a multitude of socio-cultural and community programs in India’s far north.

In addition to integrating spiritual development and human welfare, Ven. Bhikkhu Sanghasena and the MIMC are also closely involved in peace-building and inter-faith dialogues, environmental conservation activities, and in promoting Buddhist and Himalayan cultural heritage through national and international festivals. Ven. Bhikkhu Sanghasena has traveled extensively to participate international conferences, seminars, and workshops to promote spiritual and cultural values, environmental awareness, non-violence and world peace, and elevating the status of women in society—especially those from underprivileged communities.

Ven. Bhikkhu Sanghasena is also the author of Climate Change and the Himalayas and Religion and Science, among other titles. The beautiful collection of images and Buddhist wisdom gathered in Echoes from Shangri-La is are available from the Mahabodhi International Meditation Centre in Leh, Ladakh, along with Ven. Bhikkhu Sanghasena’s other books.