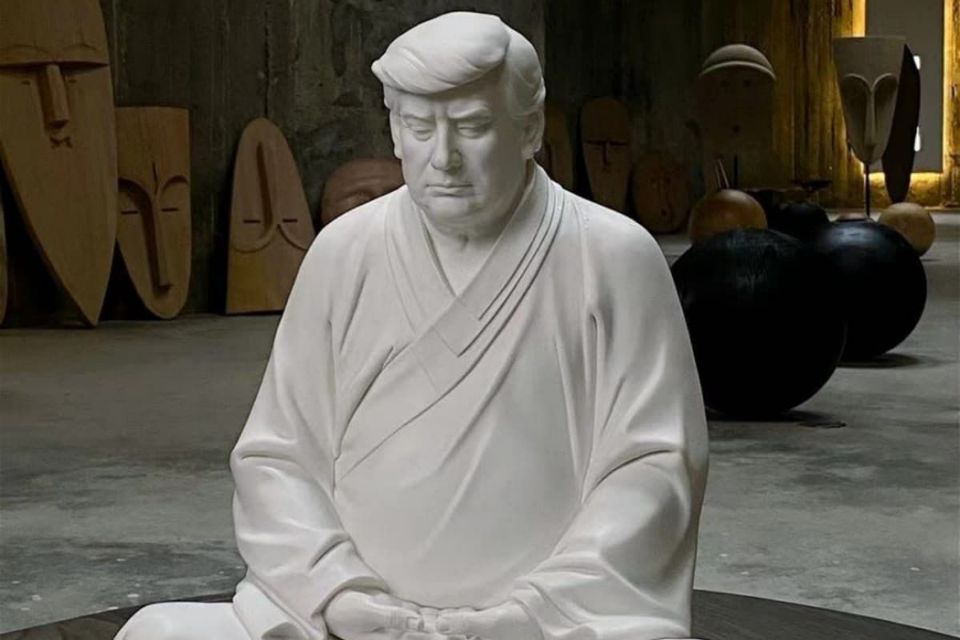 Donald Trump may not be the global newsmaker anymore after he handed the reins of American leadership to Joe Biden. But, that still didn’t stop a Chinese entrepreneur from carving out a statue of the former US President in a pose that can be remotely associated with the Republican leader. The statue looks like Trump sitting in a Buddha posture. The white-coloured ‘Trump-Buddha’ statue shows Trump sitting like Buddha, with his face lowered and hands resting together on his lap, maintaining a calm aura, with eyes shut. The statue has been listed on the Chinese e-commerce site Taobao. The larger sized statue of 4.6m is available at 3,999 yuan (Rs 44,707) and the smaller size of 1.6 meters has been priced at 999 yuan (Rs 11168).

The Xiamen-based seller drew the concept from Trump’s iconic slogan “Make America Great Again.” Speaking to state-owned publication Global Times, the seller from the Fujian province said that he wanted to incorporate the idea into Chinese products by trying to deliver a message: “Make your company great again.” The seller, an entrepreneurial furniture-seller, said that people have bought them just for fun. The company made 100 of them, and already dozens have been sold out.

“Trump can also be regarded as a representative of an era, and extreme egoism. Now the era has passed but I want the statue to remind me: Don’t be too Trump,” said a buyer to the Global Times.

The US-China relation had hit a new low under the Trump regime. Ahead of Joe Biden’s presidency, in 2020 China had called for a reset of its troubled ties with the US under the incoming administration of President-elect Joe Biden to rebuild mutual trust and end months of hostility between the world’s two largest economies. President Donald Trump’s four-years in power is regarded as the worst phase in US-China relations as the ruling Communist Party of China (CPC) headed by President Xi Jinping struggled to deal with Washington under an unpredictable American leader. “The top priority is that both sides should work together to remove all kinds of disruptions and obstacles, and achieve a smooth transition in China-US relations,” Chinese Foreign Minister Wang Yi said during a video meeting with business leaders from the US-China Business Council.