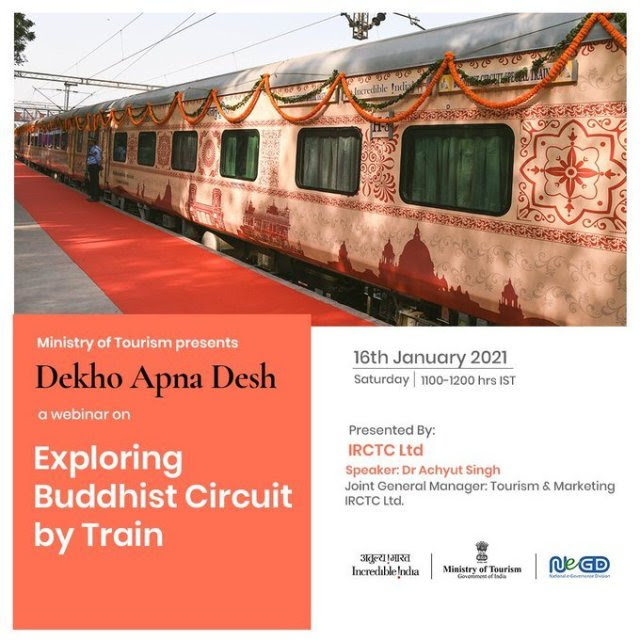 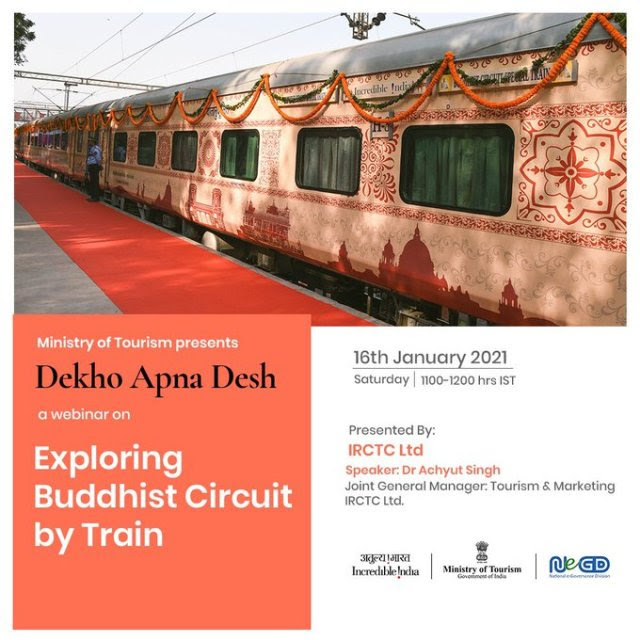 The Ministry of Tourism organised an interesting webinar titled “Exploring Buddhist Circuit by Train” on 16th January, 2021 as a part of ‘Dekho Apna Desh’ Webinar series. The Webinar focused on promoting and showcasing the rich Buddhist Heritage in India and highlighted the major destinations visited by Buddha personally across the country besides showcasing the Buddhist Heritage left behind by his disciples including the modern monasteries. Further, the Webinar also focused on providing first-hand information to the viewers on arrangements for travel (Especially by Train) & accommodation to the Buddhist Sites in India.

In the Mahaparinirvana sutra, the Buddha tells his followers that they can attain merit and a noble rebirth by going on pilgrimage to the places where he was born (Lumbini), gained enlightenment (Bodhgaya), first taught (Sarnath), and attained nirvana (Kushinagar).   The Buddhist Circuit tourist train operated by IRCTC Ltd, takes you to these places and helps you experience firsthand the self-disciplined and legendary life of Lord Buddha. The webinar began with the opening remarks by Shri Arun Srivastava, Deputy Director General, Ministry of Tourism. He said that Buddhist tourism in India has tremendous potential to draw the 500 million strong Buddhists across the world to “India -The Land of Buddha”. He said India has a rich ancient Buddhist Heritage with several important sites associated with the life of Lord Buddha. The Indian Buddhist Heritage is of great interest to the followers of Buddhism the world over. He also stated that Buddhism has remained a vital force, an inspiration and above all, a guidance to our traditions and customs. In sum, its unique contributions in the various fields of culture has greatly enriched Indian cultural heritage, apart from adding to the religious diversity of the land.

The Webinar was presented by Dr. Achyut Singh, Joint General Manager (Tourism & Marketing), Indian Railway Catering and Tourism Corporation (IRCTC). The Presenter began by providing information on life of Buddha & his teachings. He informed that IRCTC Buddhist Circuit Tourist Train envisioned for covering the most venerable sites of Buddhism, following the life path of the Enlightened One, the Buddha, himself. The Buddhist tourist train covers all the places which had a significant impact on Buddha’s life and teachings.

Shri Singh stated that Lumbini, lies across the India-Nepal border, yet the IRCTC Buddhist Circuit Tourist Train itinerary enables all guests to pay their respects at the holy site in addition to the Mayadevi temple, dedicated to the Enlightened One’s mother. The Buddha’s moment of enlightenment, enshrined for eternity under the Maha Bodhi Tree at Bodh Gaya, occupies an important place in the itinerary, as much for its religious & scholarly significance as for the monumental beauty of its confluence of Buddhist traditions from all over the world.

In crafting the Buddhist Circuit Tourist Train itinerary, special care has been taken to include the site of the Buddha’s original sermon, which gave birth to Buddhism, from where sprang all its varied forms, sects and distinctions. This august site, Sarnath, is in proximity of Varanasi, one of the most ancient seats of Indian culture. The guests have the opportunity to be mesmerized by the Ganga Aarti, that is performed on the banks of the Holy Ganges in the evenings.

Tracing the life of the Buddha from his birth to his ascension from the bindings of the material world, the comprehensive itinerary of the Buddhist Circuit Tourist Train incorporates the Mahaparinirvan Temple at Kushinagar, with its Reclining Buddha depicting the divine soul’s last earthly position of rest. Aspirants who wish to achieve deeper insight into Buddhism can delve into its intricacies while reflecting on the sermons given by the Buddha at Sravasti; specifically, the Jetavana monastery.

Final, visit is the palatial and opulent TajMahal to complete a journey that will make guest/tourist cultivate self-discipline and positive reflection. The equanimous peace that pervades this monument to love instils tranquillity in even the most irascible travellers, and soothes everyone, body and soul.