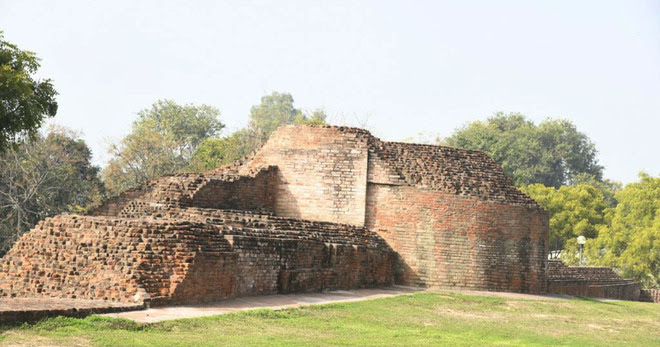 A view of the Buddhist stupa at Kurukshetra University. tribune photo

Stupa is a hemispherical structure containing Buddhist relics and place of meditation used by Buddhists monks. In the period between the Mauryas and the Guptas the older stupas were greatly enlarged and beautified. Of these three are noteworthy—those at Bharhut and Sanchi in Madhya Pradesh, and at Amaravati in the lower Krishna valley.

The word ‘Stupa’ is said to have been derived from the Sanskrit root ‘Stu’ meaning ‘to worship’ or ‘to praise’. The Stupa developed as the nucleus of Buddhist faith and worship, but its origin cannot be regarded as Buddhist for evidence of its roots date back to c. 2000 B.C.

Burial mounds containing relics were raised from earth and rock according to an age old custom that had survived from as early as Neolithic times. These burial mounds were also common during the lifetime of the Buddha and he instructed his disciples to erect them at cross-roads to commemorate great kings, sages and heroes.

A budget of Rs 4.47 crore will be spent on developing the mound of ancient Buddhist stupa situated at Kurukshetra University.

As per the PWD (B&R), the site is under the Department of Archaeology and Museums, Haryana, and it has entrusted the PWD to execute the project. As per information, the site is among the state-protected monuments and sites.

The Executive Engineer, PWD (B&R), Arun Bhatia, said, “A tender was floated for the project and it has been received. Its technical bid will be opened at the headquarters and the tender will be allotted this month. The project is set to start in February. Besides the beautification work, pathways, eatery shops, and toilet blocks will be constructed under this project. A budget of Rs 4.47 crore has been received from the Archaeology Department.”

During the archaeological excavation, five burnt brick structures were recovered at the mound

While the first three structures belong to the Kushana phase, one is related to the Gupta period, and the last structure has four successive phases which belong to the Vardhana period to later medieval period

The Deputy Director, Department of Archaeology and Museums, Haryana, Dr Banani Bhattacharyya, said, “Buddhist stupa is an iconic site and it is being developed accordingly. We will preserve the mound and the sanctity of the site. A garden will be developed there and there will gazebo and fountain. There is also a provision to install a statue of Buddha. The tree plantation will be carried out by the Forest Department. The construction work has been handed over to the PWD (B&R).”

Thanesar MLA Subhash Sudha said, “Different projects are being carried out in Thanesar to develop it as a major tourist destination. A proposal to develop the Buddhist stupa situated at Kurukshetra University was sent to the state government and it was cleared. The project will start in February and it is to be completed within a year. Every year, lakhs of pilgrims and visitors come to Kurukshetra. After the completion of the project, it will become a new tourist destination near the Brahma Sarovar and we are hopeful that it will attract more visitors.”

One such city is Kurukshetra where upholder of peace Lord Buddha himself came and preached peace and compassion to people in past. Archaeological site of Buddhist stupa is situated on the western bank of holy Brahamsarovar. Buddhist stupa and 1300 year monastery relics on the eastern boundary wall of Kurukshetra campus provide the city a distinct Buddhist character. Very few know that Kurukshetra has had it brushes with Budddhism. The stupa is believed to date back to the 7th century A.D. It was Buddha himself who brought the faith to Kurukshetra where he delivered his discourses in Thullakotthita and Kamasadamma identified by historians as Thanesar and Kaithal. The remains of Buddhist stupa have been written by Huien Tsang, the Chinese traveller.

Buddhism has always been a part of Indian culture and religion. It gained great importance during the reign of king Harshavardhana.